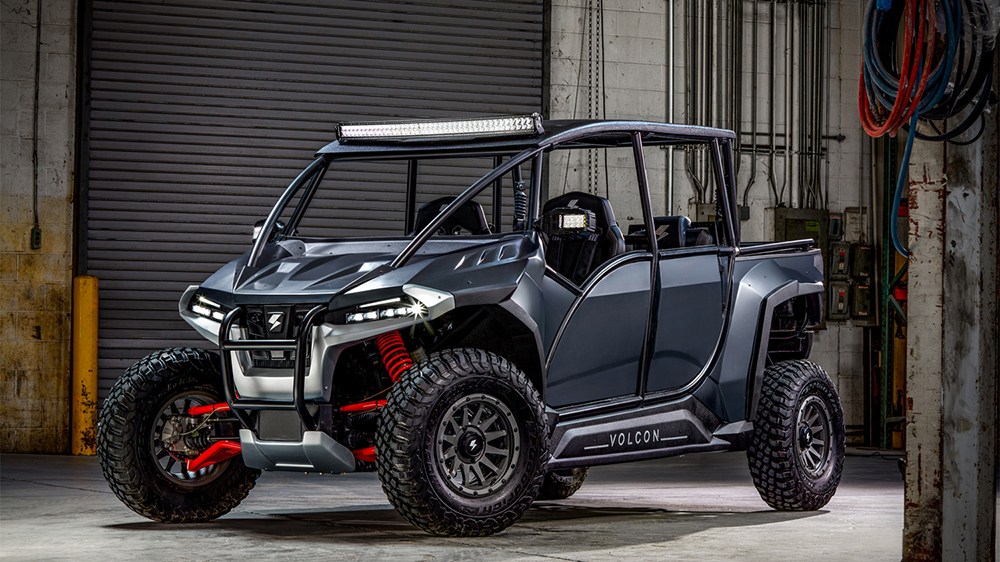 The Texas-based motorsport company, which has made a name for itself with its Grunt and Runt electric motorcycles, has just just unveiled its first UTV, the Stag. The brand’s first four-wheeler has an 80 mph top speed and looks like a natural addition to its lineup of ultra-capable off-roaders.

The Stag may be Volcon’s first UTV, but it looks like the brand already knows what it’s doing. It’s powered by a single electric motor that can generate up to 125 hp and 265 ft lbs of instantaneous torque. If that somehow isn’t enough for you, an optional power boost package pushes output past 140 horses. Thanks to all this grunt, the Stag can hit a top speed of 80 mph and tow up to 2,000 pounds. The powertrain gets its juice from a 42-kWh battery pack that will allow it to go 100 miles between charges. That should be more than enough for a day of play off the beaten path. The entire rig can be recharged in seven hours thanks to integrated Level 2 charger.

The UTV should also be a breeze to handle thanks to its low center of gravity and a suspension equipped with fully adjustable shocks. It also comes with high-performance BF Goodrich Mud-Terrain T/A KM# tires, so not even muddy conditions will slow you down. There also an on-demand four-wheel-drive for whenever the road in front of you looks particularly treacherous.

The Stag features a heavily sculpted and athletic body, a caged passenger cabin and a 13.4 cubic foot cargo bed for all your gear. Inside the cabin, you’ll find a driver’s cockpit equipped with a tilting steering wheels and two digital displays so you can monitor vehicle status and track where you’re going using GPS. You can also use the setup to control the vehicle’s two integrated cameras, which will allow you to capture all the fun you’re having. The vehicle is equipped with ergonomic premium seats in the front and back and can comfortably fit four adults.

If you’re looking for an all-electric off-roader you can reserve the Stag now through the Volcon website now for $100. The sporty UTV will start at $39,999 when it goes on sale next summer.