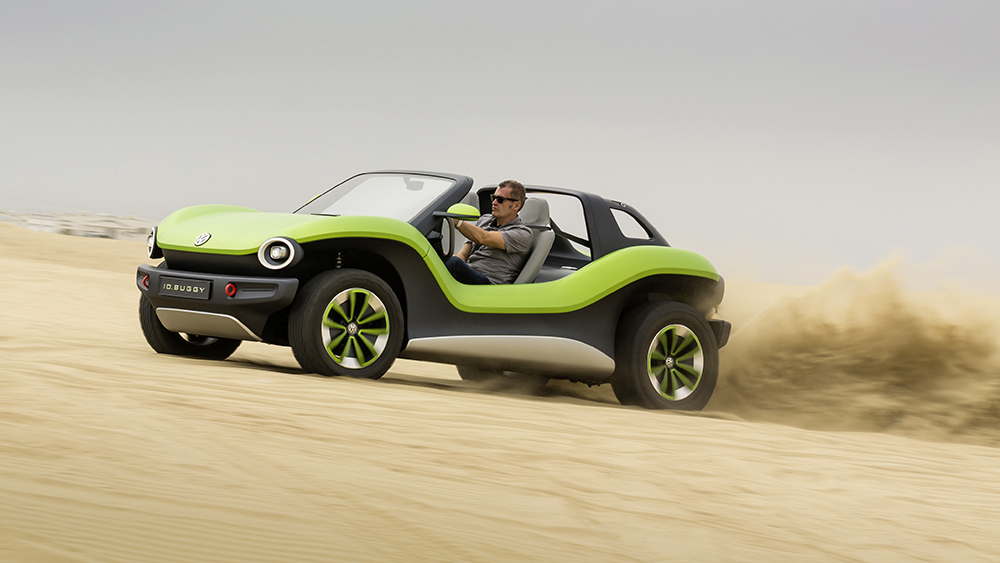 Earlier this year, Volkswagen built the world’s fastest electric car, the ferocious I.D. R, and this weekend it may have unleashed the cutest. In defiance of the supercars and vintage rides at California’s prestigious Pebble Beach, the German marque showed off a twee tribute to the Meyers Manx dune buggies of the 1960s: the new all-electric ID. Buggy concept.

The lime green concept buggy—which made its international debut at the Geneva International Motor Show back in March—is a simplistic, open-air ride built for beach cruising. Fitted with just two seats, the buggy has no climate controls, no entertainment system, no door, roof, trunk or even a back seat. What it does have is a speedometer and a battery, which means you can focus solely on putting pedal to metal, without distraction.

The ID. BUGGY and its predecessor the Meyers Manx dune buggy  Ingo Barenschee

The all-wheel buggy also has a bunch of off-road features, including solid aluminum underbody protection, a reinforced windshield frame and robust bumpers for towing and off-road tires, to tackle rough terrain with ease.

Moreover, the buggy’s basic design—the modular MEB platform and clever battery layout—means it can be easily detached from the chassis, affording more opportunity for customization.

“The ID. Buggy demonstrates the broad spectrum of emission-free mobility that can be achieved with the MEB within the Volkswagen brand. But we want to open up the platform for third-party suppliers,” Volkswagen COO Ralf Brandstätter said in a release.

What that means is that a customizer could buy the VW frame—complete with electric powertrain and battery—then plonk any body kit on top of it.

Volkswagen has a family of I.D. production cars scheduled to arrive in 2022 and by that time, the brand will have invested $34 billion in I.D. development. While the marque won’t put this particular buggy into production, it’s likely we’ll see something similar soon.

Check out more pictures of the all-electric ID. Buggy below: