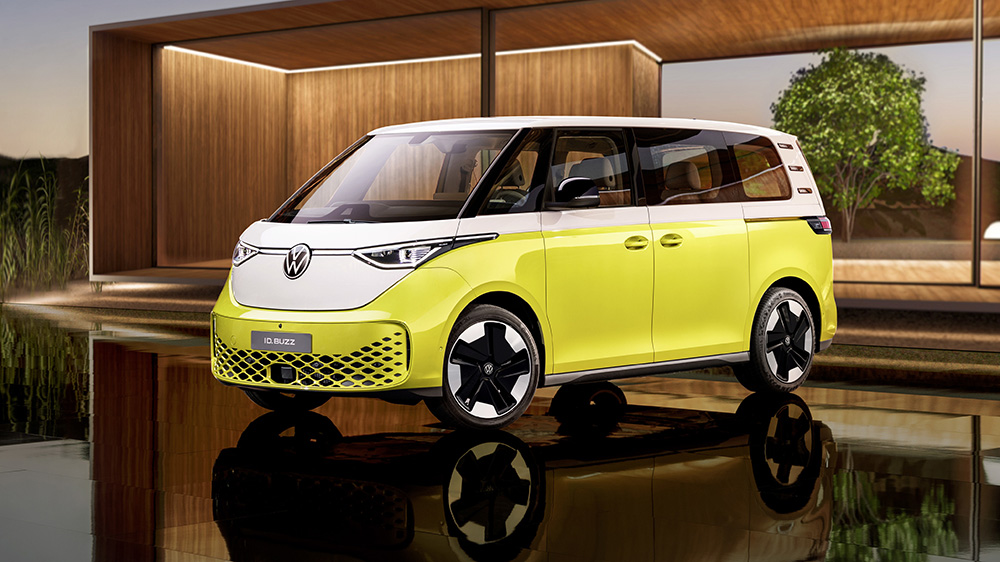 Volkswagen is bringing back an icon.

Following a couple years of teases and spy shots, the German automaker has finally unveiled the production version of its next EV, the ID. Buzz. The gorgeous all-electric update of the iconic Microbus will go on sale in Europe this year, with an extended-wheelbase version set to debut in the US as part of the 2024 model year.

We wish it looked a little more like the Type 20 concept the marque showed off in the summer of 2019, but there’s no denying the ID. Buzz is slick. The European-spec version that VW debuted on Wednesday takes several design cues from the classic Type 2 Microbus of the ’50s and ’60s, including its stubby proportions, rounded shape and the option of a two-tone color scheme. Despite all these nostalgic flourishes, it still looks thoroughly modern, especially the front end’s lower grill, the more angular rear and sliding second door on both sides of the van. It’s not screaming out for psychedelic flower decals like its predecessor, but you’d be hard pressed to find a better retro-inspired design debut this year.

Inside, the ID. Buzz is nowhere near as spartan as its ancestor. In fact, it’s decidedly modern. Upfront, you’ll find a standard 10-inch digital gauge cluster which is complemented, in the center of the dashboard, by a 10- or 12-inch touchscreen infotainment system depending on the trim level, according to Car and Driver. In the back, you’ll find a three-person bench that can fold down to maximize cargo space, though there will be plenty of space regardless: The European-spec ID. Buzz has a 117.6-inch wheelbase and is 76.3 inches tall, making it just a tad shorter than the Cadillac Escalade.

The American version will have a slightly extended wheelbase, meaning there will be even more room and a third row of seats (you’ll be able to seat two in the front, three in the middle, two in the back), according to CNET Roadshow. Size specs for the US version were not available as of writing, but it looks like the Microbus will be comparable in size to most camper vans, with more than enough room a sleeping and even a meal prep area. Both the European and American versions will have an abundance of ports and will be covered in sustainable materials.

Inside the ID. Buzz  Volkswagen

All versions of the ID. Buzz will be built on Volkswagen AG’s Modular Electric Drive Kit (MEB), which is the same platform the ID.4 and Audi Q4 e-tron use. It’s powered by an electric motor positioned on the rear axle and connected to an 84-kWh (77 kWh of which is usable) battery pack installed beneath the floor of the vehicle, to maximize space. This setup will be able to produce 201 hp and 229 ft lbs of torque. No range figure was released, but it should be able to travel around 260 miles on a charge, like the ID. 4. That number won’t wow anyone, but the van is compatible with fast chargers that should allow you to go from 5 percent to 80 percent battery capacity in around a half hour. The US version will reportedly have a bigger battery pack and the option of a second electric motor on the front axle.

Volkswagen plans to start selling the ID. Buzz and a cargo van variant in Europe later this fall. Unfortunately, we’ll have to wait for our chance behind the wheel of the all-electric Microbus. It’s not expected to launch on this side of the Atlantic until the 2024 model year.

Check out more photos of the ID. Buzz below: