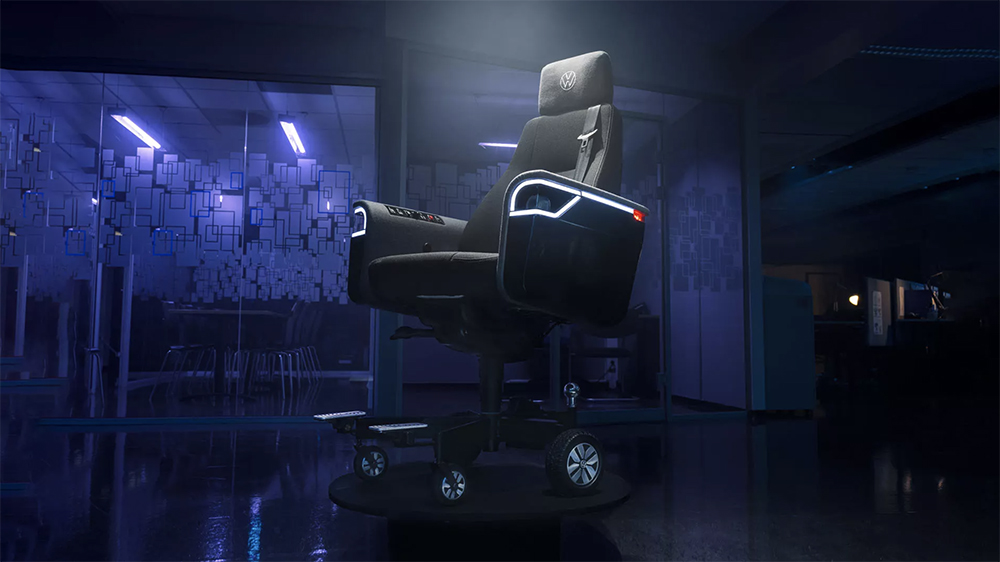 Volkswagen has dreamed up an office chair that will let you maneuver around the workplace without ever having to stand up.

The automaker’s Norwegian commercial division has just unveiled a motorized office chair concept. The battery-powered five-wheeler may not match the brand’s other EVs, but it still boasts an impressive top speed of 12 mph.

Office furniture may seem like an unexpected pivot for the German marque, but Volkswagen’s been building comfortable car seats for more than eight decades now. For the concept—which it refers to simply as “The Chair”—it has taken one of its heated car seats, added armrests, and placed it on a base attached to five wheels. Powering the vehicle is an electric motor that can push it to a speed of 12 mph. Volkswagen hasn’t said anything about how big the battery is, but it did reveal it has a range of 7.8 miles.

It should be noted that the marque didn’t just slap its logo on the seat for branding. The team that worked on the project also tried to integrate as many features as it could from the company’s series-production vehicles into the chair. Among them are goodies you wouldn’t expect to find on a piece of office furniture, like LED lights, a horn and a 360-degree rearview camera that will allow you to keep tabs on your boss. There’s even a trailer hitch in case you want to bring one of your co-workers along for a ride.

Unfortunately, there are no plans, as of now at least, to put the office chair into production. The project was conceived as a way to draw attention to the division’s vans, including an upcoming commercial version of the eagerly anticipated ID. Buzz, which is expected to go on sale in Europe before the year is out.

If you are looking for furniture made by a German automaker, you are in luck though. Earlier this year, Mercedes-AMG started selling an office chair that is basically its Performance seat attached to wheels. Unlike Volkswagen’s chair, it isn’t motorized, but it can be purchased now from the sub-brand’s website for $3,345.