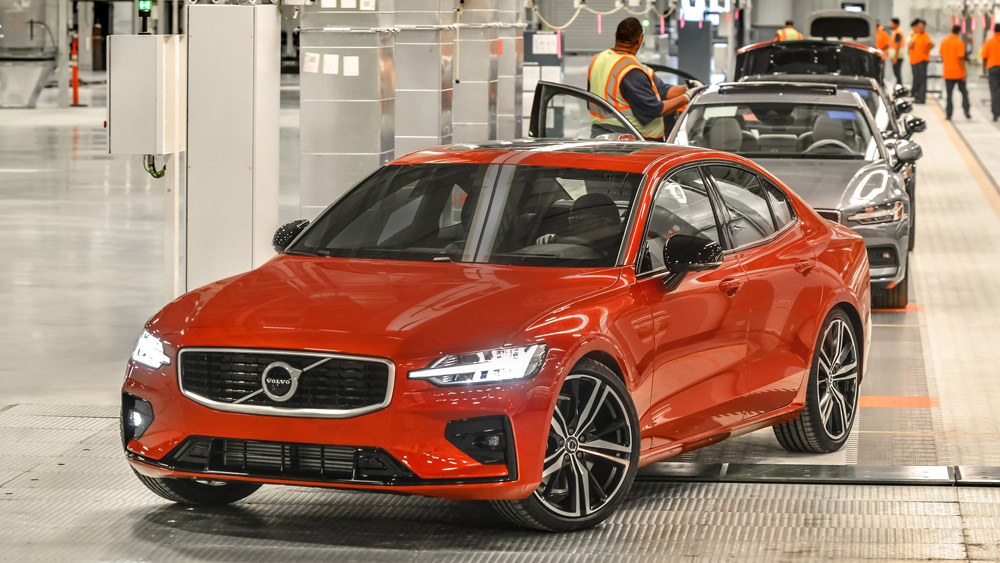 Volvo’s transformation continues with the introduction of the 2019 S60, the fully redesigned compact sedan that rivals even its most entrenched competitors. The S60 (from $35,800) sits in a crowded field with the Audi A4, BMW 3 Series, and Mercedes-Benz C-Class, as well as relative newcomers such as the Alfa Romeo Giulia and Jaguar XE. It is also the first Volvo to be built in the USA, in the company’s new billion-dollar factory in Ridgeville, S.C., that employs nearly 4,000 people.

The S60 and its wagon counterpart, the V60, began life as the Volvo Concept Coupe and Concept Estate, respectively, shown in 2014. Volvo’s senior director of design, T. Jon Mayer, who worked on the show cars and the production vehicles, says they have “a little more attitude without being overly aggressive.” Some of that attitude comes from Mayer and his team reversing the car’s proportions—giving it the stance of a rear-wheel-drive car with longer overhangs in the rear and shorter overhangs in front.

The finished products stayed true to the concepts because designers stuck to fixed points on the shared platform—a shortened version of Volvo’s new scalable product architecture (SPA). Mayer points out details such as the “Thor’s hammer” lighting graphics and the kick-up in the rear window. The new S60 also borrows from the brand’s history, having “literally the same character lines of the P 1800,” says Mayer, referring to the rear-wheel-drive sports car made from 1961 to 1971.

Under the hood of every S60 is a version of Volvo’s turbocharged 2.0-liter, four-cylinder engine. The T8 plug-in hybrid adds an electric motor for a total output of 400 hp and 472 ft lbs of torque in Volvo’s Inscription and R Design trim levels. The line-topping Polestar Engineered S60, done in partnership with Volvo’s Polestar performance division (which has recently re-launched as a standalone brand), uses the T8 engine tweaked to produce an extra 15 hp over the standard models.

On a drive from Santa Monica, Calif., to the town of Ojai, we took the S60 Polestar Engineered through mountainous back roads and had just as much fun as we would in a comparable German car (not counting top performers from BMW’s M lineup and Mercedes-AMG). The T8’s electric motor serves up the instant low-end torque typical of plug-in hybrids, making for quick acceleration and a barely perceptible transition when the turbochargers kick in. Around corners, the stiffer, adjustable multi-link front and rear suspension keeps the car planted without feeling too firm. The Polestar engineered S60 and V60 also have more stopping power thanks to a Brembo brake kit that uses slotted rotors and six-piston calipers. For now, alas, the Polestar Engineered models are only available through Care by Volvo, the brand’s new subscription service, and all examples are spoken for. A Volvo rep tells us more will be coming in the next model year.

The T6 engine, meanwhile, uses turbocharging and supercharging to achieve 316 hp, more than the mid-grade variants from German and Japanese competition. It is available in Inscription and R Design trims.

As always, safety is a main focus for Volvo. The optional Pilot Assist system can steer, brake, and accelerate up to 80 mph. On relatively straight highways, we were able to cruise with a few fingers resting lightly on the steering wheel. As with most current automatic steering systems, the sensors must detect clear markings on the road, otherwise it will disengage.

Inside, the S60 and V60 share the same simple Scandinavian aesthetic. Specially engineered seats conform to the body and are cradling without feeling constrictive; they are also designed to absorb impact in the event of a collision, reducing the chance of spinal injuries.

“The design around the interior was focused on the proportions,” Mayer says. “Since it’s a driver-focused car, we lowered the IP [instrument panel] and stretched the width into the doors.” The R design models use leather with a mesh inlay trim, while Inscription models use matte wood. The central screen on the S60 and V60 are the same found in other new Volvo models, and while the brand’s Sensus Connect interface is not the most impressive or intuitive, it does include up-to-date features such as Apple CarPlay and Android auto, as well as 4G wireless connectivity and in-car apps.

It’s one thing to create an alluring flagship, but often that allure dissipates by the time a design trickles down to a brand’s compact offerings. Not so with S60 and V60, the most beautiful incarnations of these models to date. And while the cars might not scream for attention, Mayer says he and his team are proud of what they consider to be a timeless design that won’t date quickly. “It’s the Scandinavian way—we apply the philosophy of understated luxury. You could say it’s a conservative approach, but it’s well executed and refined and will stand the test of time.”