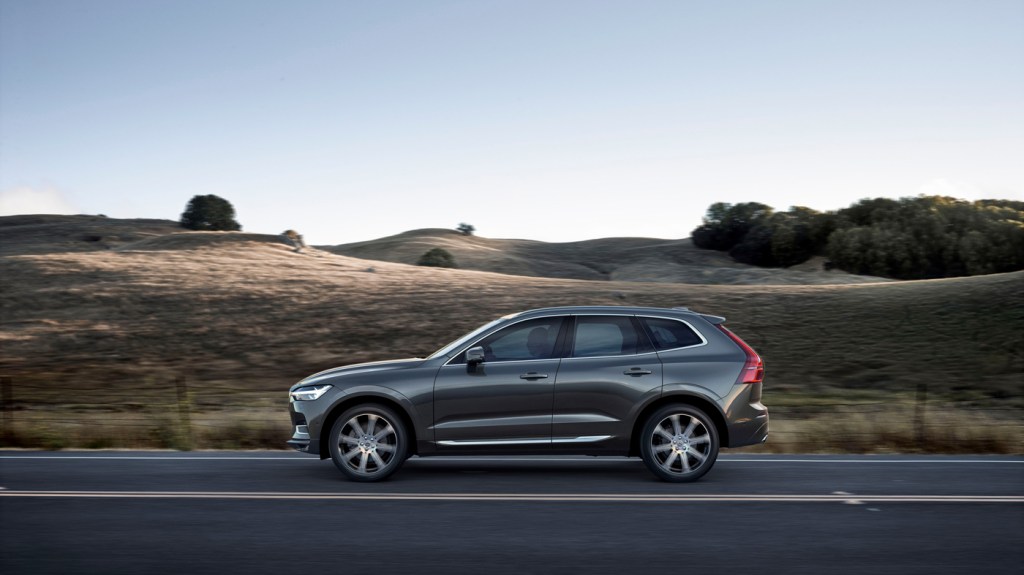 The Volvo XC60 doesn’t look like a trouble magnet—but during a test drive in Spain, it attracted some unwanted attention. Now in its second generation, the small SUV has been redesigned from the ground up with subtle good looks, everyday practicality, and the latest safety features for which Volvo is known. It’s the brand’s best-selling model in Europe and accounts for 30 percent of the brand’s sales worldwide. Predictable, unassuming, and maybe a tad vanilla? Not today.

Our route takes us northwest from Barcelona past Igualada, a city on the Anoia River known for its wine and paper-making. The highway turns into a curvy, two-lane road, and to our right is a breathtaking view of Montserrat—its name, “serrated mountain,” a nod to its pronounced, jagged peaks.

The XC60 is quiet, hardly any noise coming from the standard 20-inch tires. The cabin shares the same elegant simplicity with the handsome S90 flagship sedan but with its own unique touches, such as the optional driftwood trim: a light-colored, matte wood with uniformly vertical grain. Our T6 Inscription model (from $49,695) features a large, 9-inch touchscreen with navigation and Volvo’s Sensus interface, which includes Apple CarPlay and Android Auto. Unlike most manufacturers’ systems, the Volvo’s screen allows access to other functions when these apps are in use.

Built on Volvo’s new flexible architecture (SPA), the XC60 boasts a stiffer chassis and shorter overhangs, which equate to tidier driving dynamics. Adjustable driving modes range from Eco—which maximizes fuel economy with a “coasting” function—to Dynamic, which maximizes response from the 8-speed automatic transmission and the 316-hp inline-4. The engine is fitted with both a supercharger and a turbocharger; the former spurs torque on the low end, and the latter kicks in at higher revs. The result is a capable, comfortable ride perfect for a pleasant, scenic outing.

Our reverie is interrupted by an old BMW hatchback with blistered metallic green paint swerving aggressively behind us. Clearly, Señor Aggro is in a hurry, and our impatient neighbor sucks our twin tailpipes until we turn off onto a dead-end dirt road and let him speed by.

With the help of the XC60’s parking sensors and cameras, we turn the car around and get out to admire the view. Thomas Ingenlath, Volvo’s former head of design (now chief operating officer of the marque’s performance division Polestar), has done a fine job making the compact XC60 look distinctive but not overdone. Proportions are athletic yet streamlined. The upright front grille is flanked by LED headlights in Volvo’s signature “Thor’s hammer” shape. From the side, the XC60 has a high belt line and deeply sculpted lower doors and rocker panels. In back, LED taillights frame the XC60’s tailgate with horizontal lines, giving the impression of width.

Suddenly, Señor BMW and his passenger come speeding back toward us. He slams on the brakes and does a Hollywood-worthy J-turn not far from our parking spot. A tattooed woman—who looks as if she’s had too much coffee and too few tapas—gets out of the passenger side and begins to reach for something in the back seat. My driving companion and I scramble back inside our car.

“Adónde vas?” the woman asks my driving companion, who makes a dash for the passenger side of our XC60. I throw open his door and hit the throttle as he jumps in. The woman hurls a combination wrench in our direction, and misses. We take off, and they follow close behind.

Fortunately, there’s enough power from Volvo’s 4-cylinder to outrun the old BMW’s naturally aspirated inline-6. As we dash over the rolling hills, the XC60 stays settled—a testament to its solid chassis and a new suspension: double-wishbones in front, multi-link in the rear. Optional air springs lower the ride height at speed and further smooths out the ride. When Spanish Bonnie and Clyde disappear from the rearview mirror, we pull off onto a side road and sink into the massaging seats, which give a firmer, more effective prodding than competitors’ offerings.

Having exhausted our inner stunt driver, we switch on Volvo’s semi-autonomous driving system for the drive back to Barcelona. This optional suite of features allows the car to automatically steer, accelerate, and brake at speeds of up to 80 mph. Dubbed Pilot Assist, Volvo’s system is smooth, not reactive or twitchy like some competitors’ systems. Also new for the XC60 is a steering-assist feature, which steers the car away from an oncoming collision, and a run-off-road mitigation system, which will keep the car on the road if it begins to drift—or if some drugged-out locals decide to harass the tourists.

Deliveries for gasoline-powered XC60s are slated to begin this August. A month later, the line-topping T8 model will debut, which pairs the T6 gasoline engine with two electric motors for a total output of 400 hp. So to all those would-be robbers driving beat-up BMWs: We’ll be waiting for you.