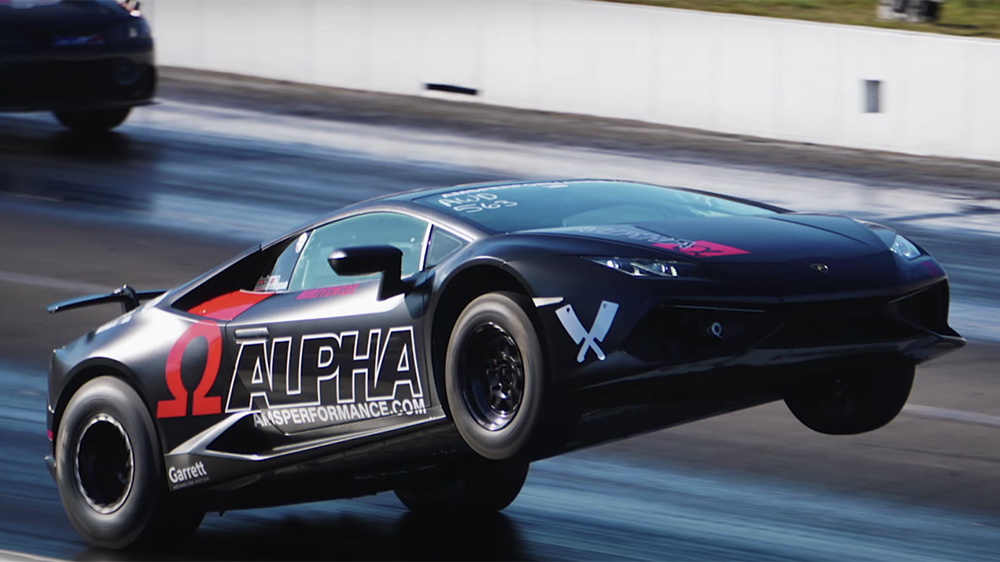 Even the most casual car fan knows that the Lamborghini Huracán is speed machine. But imagine one so with so much grunt that it can barely accelerate without its front wheels raising off the ground.

Jordan Martin’s AMS Performance-built Lamborghini dragster, which happens to be the star of That Racing Channel’s latest YouTube video (via Road & Track) recently did just that.

The popular channel’s new video documents a recent weekend of drag racing action by Martin’s souped-up Huracán. The whole video is well worth your time but of particular note is a run half way through the clip (starting at the 4:50 mark) in which the car nearly performs a wheelie down the entire drag strip. The run, like most in the video, starts with the front wheels raising off the tarmac but this time after coming down they launch back up again, so high that you worry the car may flip over. Fortunately, it doesn’t and the car goes on to cover a quarter-mile in a matter of just over seven seconds. (Oh, and the reason why its front wheels struggle to stay earthbound? A heavily modified powertrain that churns out a stunning 1,800 horses.)

Though the dragster looks just like a Huracán that’s been done up with a racing livery, that’s where the similarities end. According to the video, the supercar’s 5.2-liter V10 has been modified with AMS’s twin-turbo kit, which includes two 68-millimeter Garrett turbochargers. Thanks to this not-so-subtle alteration, the engine can deliver about three times as many horses as the car would normally output. A shot inside the car shows that it’s also been outfitted with a roll cage, which is a slight comfort after seeing the car nearly go airborne.

Throughout the video, Martin’s Lambo is shown consistently running the quarter mile in about seven seconds, an incredible time, even for a supercar. And, amazingly, it might just be scratching the surface of what it’s capable of.