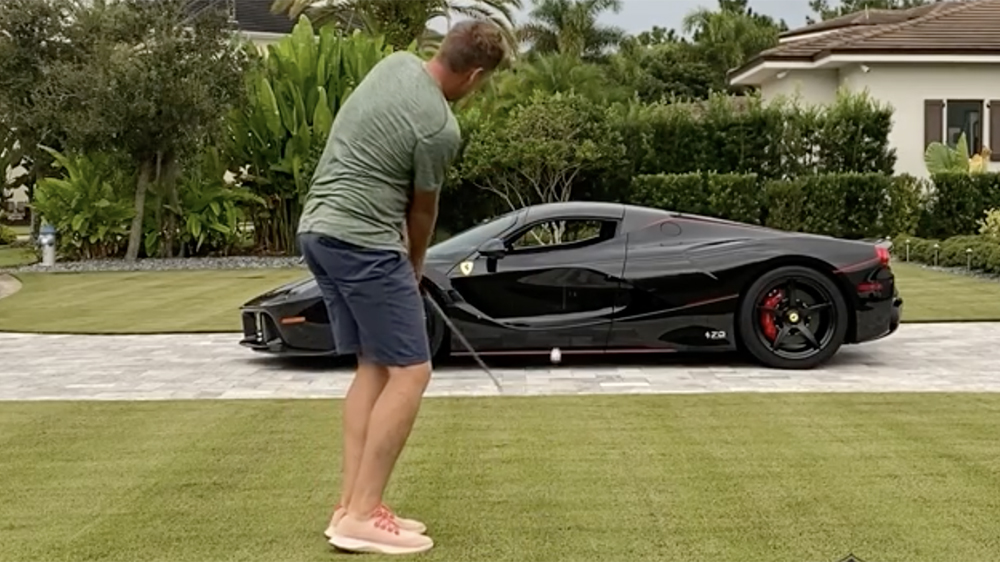 Just think of all the things you could do in a LaFerrari Aperta. You could use it to scream across a racing tarmac at more than 200 mph, rip around hairpin turns with ease or just gaze in awe at the monument to Italian automotive excellence. Golfer Ian Poulter, on the other hand, uses his $2.2 million speedster for something else: trick shot videos.

Normally the last thing anyone would want sailing towards their Aperta is a golf ball. Don’t tell that to the English pro, though, who posted a video to Instagram of himself casually chipping a ball through the open driver- and passenger-side windows of his exclusive hybrid hypercar on Monday.

The clip starts with Poulter bringing his black Aperta to a stop in front of a pitching wedge and golf ball. With Drake’s 2015 single “Know Yourself” booming from the car’s sound system, the golfer exits the parked car, walks over to the club, sizes up his shot and calmly chips the ball right through the vehicle’s open windows. The whole thing lasts a matter of seconds, each of which is sure to make any auto enthusiast break out in a sweat.

While hitting a golf ball through the open windows of any car is risky, it’s especially so when the vehicle in question is an Aperta. The roadster is equipped with a hybrid powertrain consisting of a 6.2-liter V-12 engine and a 120 kW electric motor capable of hitting a top speed of 218 mph. Poulter’s hypercar is one of just 210 examples built by the Prancing Horse, all of which sold out before the car even made its debut at the 2016 Paris Motor Show. On the very rare occasion that one hits the market, it can sell for upwards of $4.5 million.

Of course, the reason why Poulter may have felt comfortable using his Aperta for this trick shot video is because it’s just one of a number of ultra-exclusive Ferraris he owns. In fact, the golfer’s rich roster of exotic vehicles includes a sub-collection he’s dubbed the “Ferrari Supercar Five,” which includes the 288 GTO, F40, F50, Enzo and an original LaFerrari.