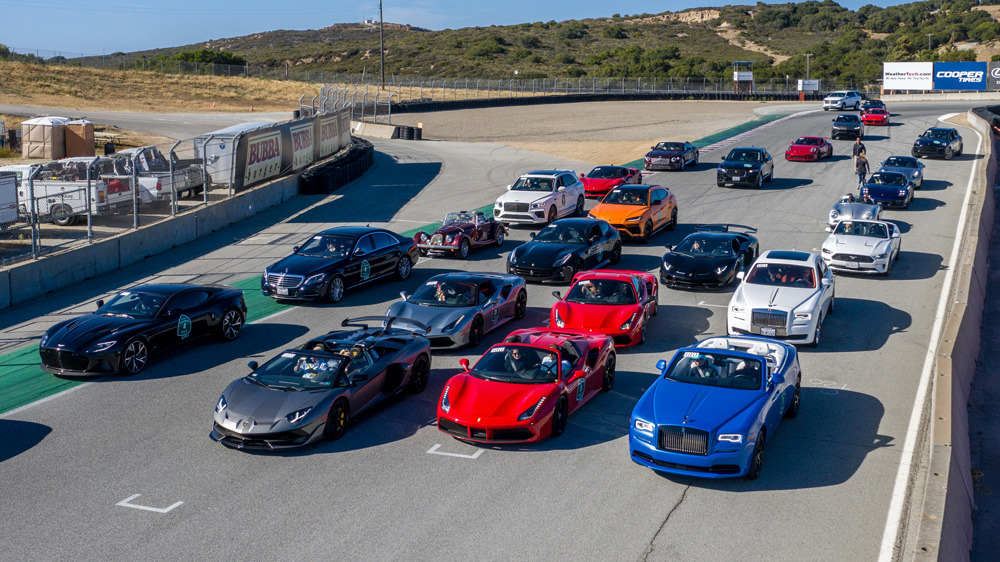 Wanderlust. Through the course of the last year, all of us have caught it, the symptoms increasing with each passing day as the world compressed to within the walls of our respective homes for much of the pandemic. Dreams of escaping on a road trip with good friends, enjoying fine dining and accommodations at top resorts and rediscovering the freedom afforded only by the great wide open seemed, for a long time, to be as plausible as a journey to Mars. This past week, however, a select few found an antidote, Robb Report’s 2021 California Coastal road rally. Here’s a glimpse at some of the action. (Video courtesy of WayUp Media.)

From June 6 though 10, a cadre of 50 Robb Report RR1 club members in 27 supercars and exotics ventured through some of the Golden State’s most picturesque landscape between Santa Barbara and Napa Valley. With all Covid health and safety protocols strictly adhered to, the automotive parade marched just shy of 574 miles in three drive days.

After settling in at Santa Barbara’s Ritz-Carlton Bacara on Sunday, all the guests made a beeline to check out the other cars on display that would be joining them on the rally (additional eye candy was provided by Lugano Diamonds and Napoli-based menswear designer Isaia). Rally sponsor Porsche brought variations on its 2021 Panamera—including the GTS—and Cayenne for test-drives, while also supplying a couple of vehicles for the entire run.

Monday covered 260 miles, leaving freeway traffic within the first hour to join Pacific Coast Highway in San Louis Obispo. After a coffee break at Morro Rock, a 581-foot volcanic molar in the mouth of the surrounding bay, it was on to aptly named Ragged Point flanked by the Santa Lucia Mountains and crashing surf hundreds of feet below.

The route then snaked through Big Sur and Carmel before reaching one of the most revered circuits in the country, WeatherTech Raceway Laguna Seca. The field of entrants made two laps in formation on the same track that motorsport’s greatest names have tested their mettle against each other and the infamous set of consecutive turns known as the Corkscrew. Fittingly, another mecca for automotive enthusiasts (and golfers) was the evening’s terminus, Pebble Beach and the tony Inn at Spanish Bay.

The 7:30 a.m. rolling start on June 8 was the earliest of the rally, as another 216 miles were on an already stacked agenda. After taking in the scenery of famed 17-Mile Drive and breakfast at the Beach & Tennis Club at Pebble Beach, it was on to an exclusive viewing of Bruce Canepa’s assemblage of race cars and classic automobiles, some even for sale, guided by the racer himself. Even the most jaded collectors were drooling over a lineup that includes the 1969 Porsche 917K that took the checkered flag at Daytona, the 2,500 hp 1967 Shelby Super Snake Dragster and the 2009 Audi R15, one of the three examples that swept the 24 Hours of Le Mans in 2010. Needless to say, there was plenty to discuss over dinner and drinks by the fire at Bodega Bay Lodge later that night.

Bruce Canepa and his 1988 Porsche 959SC restoration at his namesake facility in Scotts Valley, Calif.  Photo by Robb Rice.

The final drive day, while only about 98 miles in length, was the most challenging. Despite breathtaking views, drivers couldn’t afford to turn their attention from the road, as hundreds of tight s-turns outlined the way to Napa Valley, finally relenting upon approach to the new Montage Healdsburg, site of the concluding gala dinner and overnight stay.

The view of the vineyards and suites at Montage Heladsburg.  Photo: Christian Horan, courtesy of Montage Healdsburg.

“This was the first group event for us,” says Jonathan Weizman, “Anybody you sit next to, you find something in common with.” And his wife Anna noted that they felt “an instant connection” with the others. Tom Papadopoulos, a veteran of numerous rally-style programs, brought his daughter Cali as his driving companion and found the event to be “sporting, elegant and with great people who take it a little less seriously and have a really good time.”

Although this was the first rally of its kind for Robb Report, plans are already in the works for the next installment as it becomes a regular part of the curated experiences offered to RR1 club members—those who seek the road less traveled, especially now. After all, wanderlust has no permanent cure.

To receive more information on the 2022 edition, please visit here.

The California Coastal Rally, Day 4: The Road to Napa