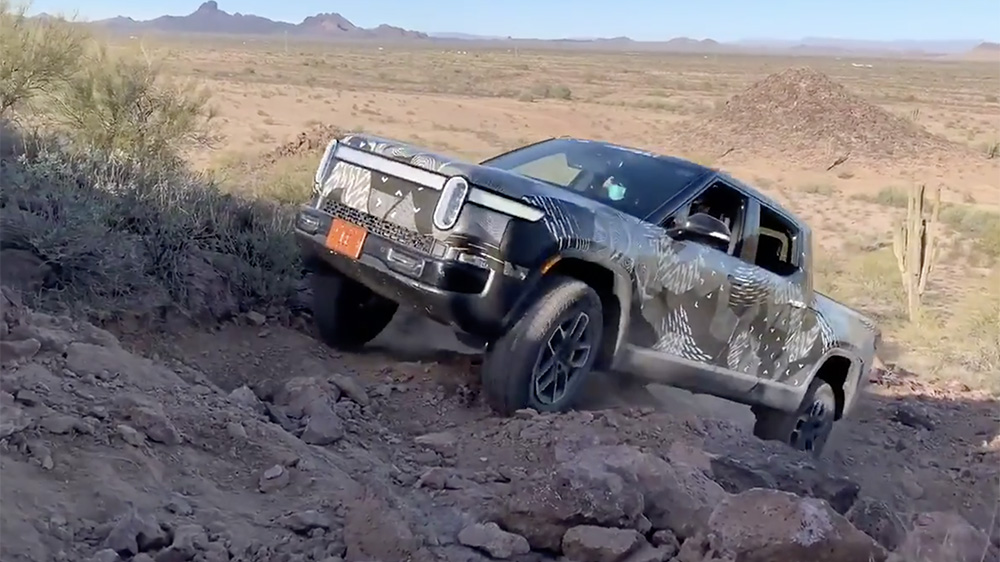 The Rivian R1T promises to be a lot less harmful to the planet than your current gas-guzzling truck, but it might be just as capable, too.

The EV startup has just shared new video of its eagerly anticipated electric undergoing off-road testing in Arizona. And if the footage is anything to go by, the R1T won’t have any problem keeping up with its combustion-engine cousins. In fact, it might even outperform them.

The battery-powered truck’s off-roading prowess can be seen in two clips posted to Twitter over the last week by Rivian CEO RJ Scaringe. In the first, the truck makes its way down a slippery gravel road. Despite all the loose rocks and bumpy terrain, the truck’s four wheels keep it crawling steadily forward. And once it reaches more solid ground, it accelerates away with ease.

But it’s the second video that really shows off the R1T’s strength. Captioned simply “Steep grades,” the clip shows the truck slowly but surely making its way up a particularly precipitous hill. Although it’s the sort of tall, rocky mound that any off-road vehicle would struggle with, the electric pickup keeps on pushing and makes it to the summit quicker than you’d expect. It’s only on a second viewing that you realize what really makes the feat so impressive—it’s accomplished without the aid of the hulking, knobby tires normally seen on off-roaders.

It shouldn’t come as a complete shock that Rivian’s truck, which is set to go on sale this June, can handle itself off the paved road. Each version of the all-wheel-drive pickup features a quad motor setup, and when equipped with the 135-kWh battery pack, the R1T will be capable of delivering a monstrous 754 hp and 826 ft lbs or torque. Not too shabby.

Thank to the brutish electric drivetrain—and an adjustable air suspension that can raise ground clearance from eight to 14 inches—the brand’s first truck may burn clean, but it looks like won’t have any problem getting a little dirty.