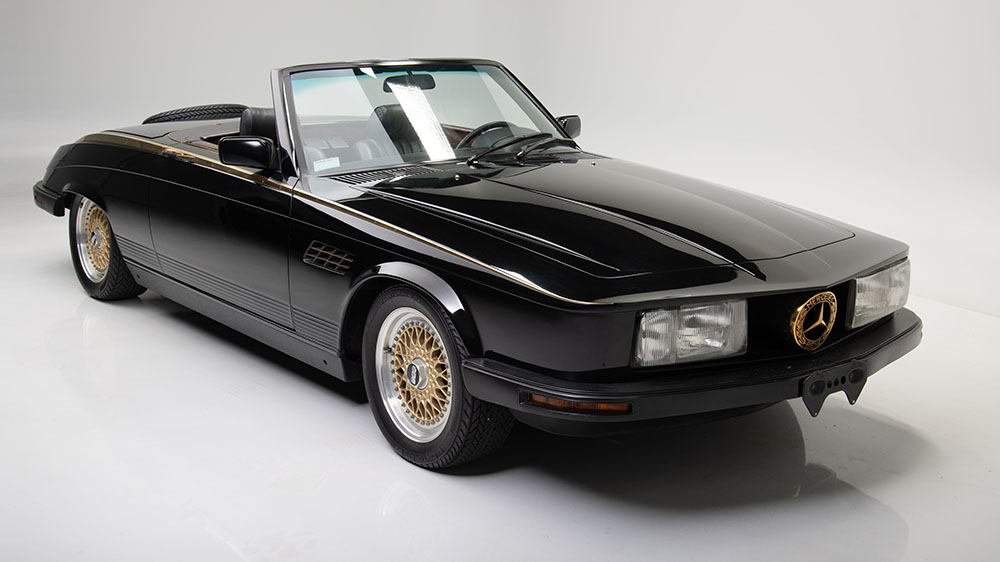 No Las Vegas automobile auction could be complete without one of Sin City’s premiere entertainer’s prized possessions hitting the block.

A custom 1981 Mercedes-Benz 380SL roadster belonging to Wayne Newton, a.k.a. Mr. Las Vegas himself, will go under the hammer at Barrett-Jackson’s latest sale in the Entertainment Capital of the World next month. And not only did the car once belong to one of the desert city’s most beloved residents, it looks unlike any other SL before or after.

Few cars more loudly trumpeted success at the beginning of the ’80s than the SL roadster. Which is why it makes complete sense that Newton was driving one up and down the strip right around the time he was cementing his place as a Vegas legend. But this isn’t any old, off-the-lot 380SL, as Newton commissioned Long Island-based coachbuilder and artisan Niko Soko to radically reimagine the vehicle.

The resulting car is a true one-of-kind convertible. The black and gold Mercedes features a naval theme inspired by classic wooden boats from the ‘40s, according to the auction house. In addition to its new sweeping profile, there are hand-fabricated moldings on the side, a retractable hardtop with engravings reminiscent of Egyptian hieroglyphics and the spare tire compartment has been moved to the rear deck lid like a classic Chrysler from the ‘50s. Finally, the factory wheels were swapped out for a gorgeous set of 16-inch gold BBS cross-lace wheels.

Soko didn’t modify the entire car, though. The 380SL’s black leather interior looks just as it did when the car originally left the factory. Also untouched is the 3.8-liter fuel-injected V-8 engine underneath the hood. Although Newton’s car is 40 years old now, it remains in pristine condition, with less than 2,000 miles on the odometer. That’s because it has spent much of the last three decades on display at the “Danke Schoen” singer‘s museum at his former Casa De Shenandoah ranch outside Las Vegas.

If you’re a Wayne Newton stan or just want to add something outside the box to your collection, the car is set to go up for bid during Barrett-Jackson’s Las Vegas 2021 event, which runs from June 17 to 19. The custom SL is being offered without reserve, so you might even be able to score yourself a one-of-a-kind bargain.