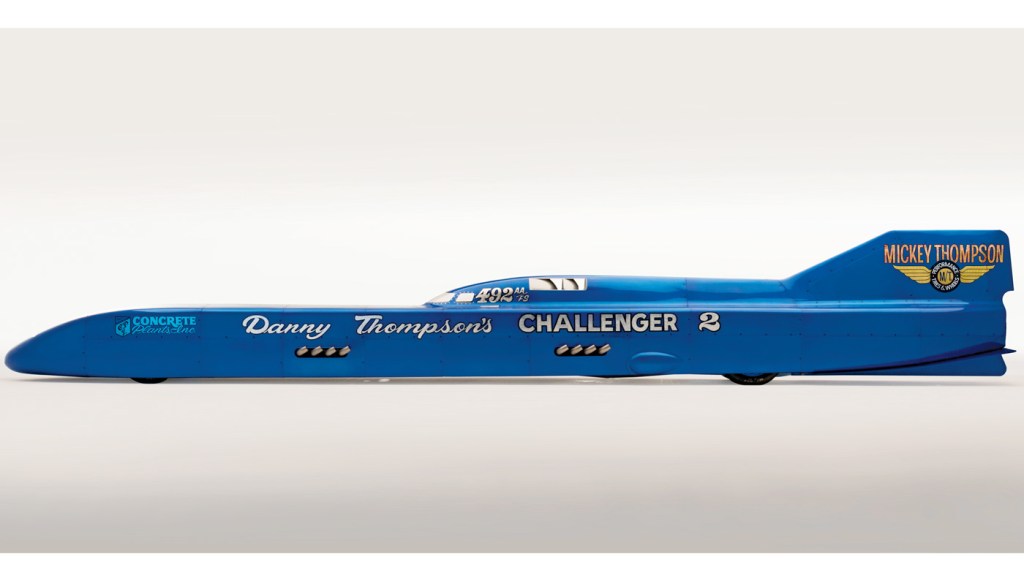 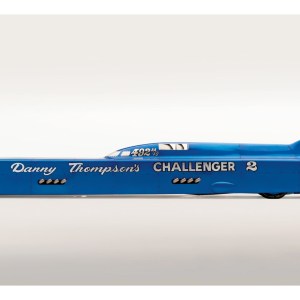 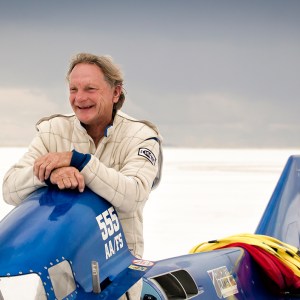 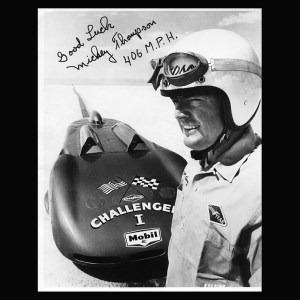 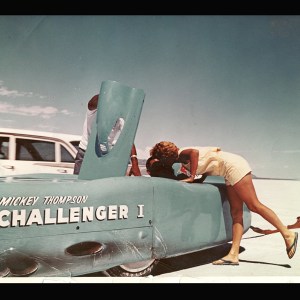 In 1960 at the Bonneville Salt Flats in Utah, Mickey Thompson reached an unprecedented speed of 406.6 mph in a four-engine streamliner he called Challenger 1. However, figures for official land-speed records are determined by the average speed of two runs—one in each direction—and on the return run, the car’s engine failed. That first attempt at the record turned out to be Thompson’s final one. He came back to Utah eight years later in a new car, Challenger 2, but the event in which he planned to race was canceled because of poor weather. In 1988, Thompson and his wife were murdered; a former business partner was convicted of arranging the killings. Two years ago, DANNY THOMPSON, Mickey’s son—who also is a racecar driver—piloted Challenger 2 at Bonneville and exceeded the speed his father achieved. But, like his father, he didn’t officially break the land-speed record for that vehicle class.

“I went to Bonneville with my dad when I was young just to watch. I didn’t make it back until 1999, but I was an experienced racer by then. I thought, ‘This should be easy. You go out there, drive straight, set a record, have a few beers with the guys, and then go home.’ I found out that the things you learn in other types of racing don’t necessarily apply at Bonneville. You’re running on a slippery surface, almost like slushy snow, so you never want to make any quick movements with the car. It took me five years to get into the 200 mph club, but once I got a taste of what the salt flats can offer I was instantly hooked—they call it salt fever.

“In 2010, on the 50th anniversary of my dad’s breaking the 400 mph mark at Bonneville, I began working on his old car, the Challenger 2. In this vehicle class, the engine power must be driven through the wheels to make traction, which is what makes it so difficult.

“In 2014, my team and I went to Bonneville, and on our first run we broke the existing record of 394.19 mph with a top speed of 419 mph. Unfortunately, we had a clutch failure in the rear engine on our return run, so we didn’t set an official record. And rain canceled the racing at Bonneville last year.

“Bonneville was what put my dad on the map more than 50 years ago, so finishing what he started—in the car that he built—has special meaning. There are only 12 people in the world who can say that they’ve gone over 400 mph in a piston-powered car. My dad did it, and now I have too. But I need to finish that phase of the Thompson family legacy. And we’re close. If we get good weather this year, we’ll do it.”

Setting a land-speed record begins with obtaining an annual membership to Bonneville Nationals Inc. You can acquire one through the Southern California Timing Association (scta-bni.org). Once you’re a member, you can obtain the appropriate license from the SCTA to race at Bonneville. To get a D license, for example, you have to execute runs at speeds from 125 mph to 149 mph, successfully deploy parachutes, and perform other safety measures. With the right license, an approved vehicle, and a Bonneville Nationals membership, you can officially chase one (or more) of hundreds of records each August during Bonneville Speed Week—from a mid-30s mark on a 50 cc motorcycle to more than 400 mph in a streamliner.