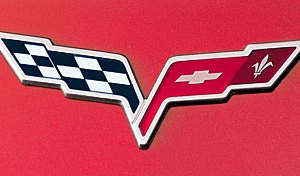 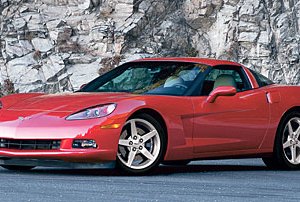 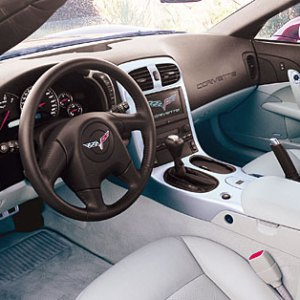 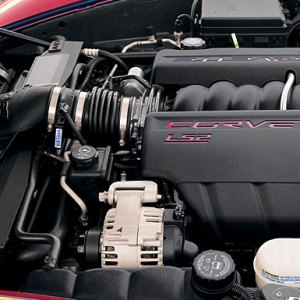 The generations of engineers and designers responsible for building the various iterations of the Chevrolet Corvette over the past five decades have been nothing if not consistent. From its show-car beginnings through its current state, the ’Vette has maintained certain essential characteristics. Among these are contemporary, eye-catching styling, seating for no more than two people, and bodywork executed in some kind of synthetic material (first fiberglass and then a variety of thermoplastics). But none of these elements represents a reason persuasive enough to acquire the car, especially if you are not moved by its mystique. The ’Vette’s sustaining and most endearing quality is its performance, and for some 49 model years, the source of its power has been a simple V-8, the all-American antidote to complicated, high-winding European engines.

The same formula that has worked so well for so many years was used to produce the 2005 Corvette, which is not only the best ’Vette ever, but also, by virtually any measure, one of the premier sports cars in the world. Under the forward-opening hood is a new version of an engine whose roots can be traced to the legendary small-block Chevrolet V-8 of 1955. Made of cast aluminum, the ’05 Corvette powerplant still actuates its valves via pushrods and rocker arms, but thanks to some modern technology, improved breathing, increased compression, and lots of displacement (now 6 liters), it churns out a healthy 400 hp at 6,000 rpm. In the tradition of its forebears, this engine produces plenty of torque as well—some 400 ft lbs at 4,400 rpm.

With a narrower, shorter, lighter, and more aerodynamically efficient package wrapped around it, the LS2 engine can push the Corvette to a maximum speed of 186 mph and complete the zero-to-60-mph sprint in a whisker over 4 seconds. These figures are for ’Vettes equipped with the optional Z51 performance package; other versions are only slightly slower.

Circumstances prevented me from testing the car’s prowess at speeds faster than 3 miles per minute, but I did reach a close approximation to those velocities before road conditions demanded more prudence. Controlling any car at such a pace is, to borrow a phrase from fighter pilots, like “milking a mouse”: Driver inputs must be gentle and minimal. While I exercised the proper level of restraint, the ’Vette remained glued to the pavement regardless of dips and ripples, and it felt more stable than many exotic imports do at such elevated speeds. The car experienced no aerodynamic problems; even the wind noise seeping past the window seals was minimal. The engine remained unstressed as it worked in the range where it is most efficient. Indeed, the ’Vette felt as though, road terrain permitting, it could have maintained its 170-plus-mph pace until it ran out of fuel—which would have taken quite a while. Even with considerably heavy-footed driving, the test car managed a more-than-respectable 19.1 mpg average.

Even at tamer speeds, the ’Vette is a pleasure to drive. After all, 400 horses in a 3,200-pound car guarantee entertainment. Whether launching from a stoplight or passing a slower car on the highway, it leaps forward, while making the Chevy V-8 exhaust music that is as distinctive as the thump of a Harley-Davidson twin.

A sports car must provide more than straight-line speed, and the Corvette does. It offers better handling and remarkable ride comfort, although the basic chassis layout is the same as the one for the previous design—a hydroformed steel chassis with reinforcements of magnesium and aluminum; light-alloy suspension components at each corner attached to single-leaf springs of composite material; the engine moved as far back in the frame as possible; and the transmission mounted in the rear.

Those same features that imbue the driver with confidence at top speeds are apparent in ordinary travel. The steering is fast and wonderfully precise, requiring just the right amount of effort. Direction changes are nearly instantaneous and unaffected by faults in the road surface. The brakes are tremendously effective, offering plenty of feel and requiring just enough pressure on the pedal. As the pace increases, the handling seems to improve, and though the car does have cornering limits, they come at velocities well beyond those most of us will ever experience.There is more to the magic than a superbly developed suspension system and gummy tires. I am not a fan of electronic traction control and vehicle-stability systems, but those installed in the Corvette are beyond reproach. The onboard computers allow a noticeable amount of wheel spin or drift angle or both before intervening, giving the enthusiast some leeway to play and the unwary a warning to ease up a bit. Better still, a push on the control button shifts the system into Competitive mode, which assumes increased driver skill, and for the expert, yet another push turns off the system.

Performance alone makes the Corvette worthy of consideration, but its svelte new shape makes the car even more appealing. The pop-up headlights, a constant design element since 1963, are gone, and they are not missed. The new look offers plenty of visual drama while remaining refined. The decrease in length is readily apparent; this is the first ’Vette in years that does not look longer than it really is. The standard coupe is beautiful, and the convertible is gorgeous. In either form, the ’Vette makes many recent Italian grand tourers appear positively dowdy.

The interior, an area where many past Corvettes have been lacking, has become a first-class cabin. As might be expected, the driver’s half of the space received the lion’s share of the designers’ attention; a cluster of simple-to-read gauges is surrounded by controls sited for ease of use. Aluminum trim has been applied tastefully, and for the first time, Corvette includes a GPS navigation system in the options list, in addition to the usual audio system upgrades.

But the truly outstanding feature of the surprisingly roomy interior is the seat design. Not only does the range of adjustments allow almost anyone to settle into an ideal driving position, but the seats are firm and bolstered for spirited driving, and they are comfortable enough to sit in for hours. Behind them is enough space—albeit open and thus unsecured—for a fair amount of luggage.

For all that is offered, the Corvette’s $44,000 base price represents a bargain. The primary test car carried the substantially greater price of $53,000, but it came with, among other items, the Z51 package, which includes the best of the three available suspension setups; closer gear ratios in the 6-speed manual transmission and rear axle (the 4-speed automatic Z51 has only a different rear-axle ratio); larger, cross-drilled brake rotors; and tires with a higher speed rating.The package adds only $1,500 to the sticker price.

As impressive as the new ’Vette is, any shortcomings could be underscored in a year or two when the Z06 version is introduced. Word is that it will feature a 7-liter version of the same engine that will crank out some 500 hp. Meanwhile, it is reasonable to suggest that the current version represents a less expensive but otherwise near equal alternative to some highly regarded European grand tourers.