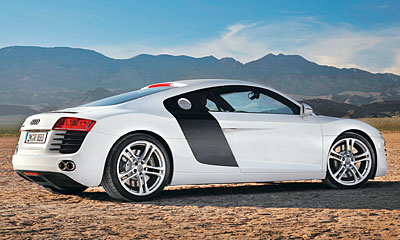 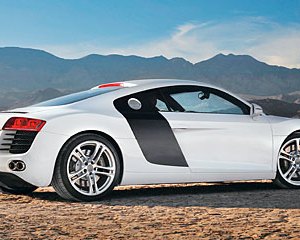 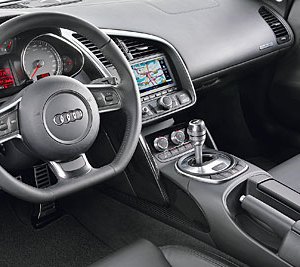 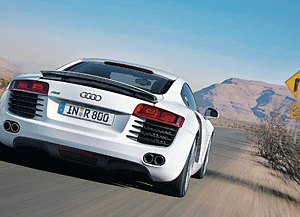 The thin, dry desert air over the Las Vegas Motor Speedway often resounds with the noise of F-22 Raptors and B-2 Spirits running war games out of nearby Nellis Air Force Base. However, on a recent balmy January day at the track, the source of the din—save for the intermittent raucous blat of a dragster practicing quarter-mile runs—is a dozen low-flying German sports cars. Their naturally aspirated (nonturbocharged and nonsupercharged) V-8 engines rev to the high-strung metallic tune of 8,250 rpm.

The fleet of Audi R8 4.2 FSI Quattros—the marque’s first-ever mid-engine, series-production sports car—is fresh from the Audi factory in Neckarsulm, Germany, home to the same research and development center for lightweight materials that produces the aluminum space frame found under the skin of the Lamborghini Gallardo.

In a desert drive, on Northshore Road along Lake Mead and through the Valley of Fire at extralegal speeds, the car’s performance does not seem as extreme as its Italian sibling’s. The R8 is more comparable to the Porsche 911 Carrera 4S, though with a $100,000 base price, it is slightly more expensive than the $88,000 Porsche. Audi claims that the R8 will reach 60 mph from rest in 4.6 seconds—an acceleration rate identical to that of the 4S—but according to my intestinal stopwatch, and considering Audi’s usually conservative performance estimates, the R8 probably is quicker. The 4.2-liter, fuel-injected engine develops 414 hp—or nearly 100 hp per liter—that, according to Audi, propels the vehicle to a top speed of 187 mph. More significantly, 90 percent of the engine’s torque is available between 3,500 rpm and 7,500 rpm, which means acceleration requires only a blip of throttle.

The vented and slotted brakes make decelerating even easier. But handling, not brute speed or braking force, is this car’s forte. At the Vegas speedway, the R8, equipped with a rear suspension system that will be added to the next Lamborghini Gallardo, remains planted and predictable during high-speed cornering on the track’s tight, 90-degree corners and frequent chicanes. This is not to say that the car is devoid of drama: With the electronic stability program (ESP) disengaged, the R8 is about as stable as plutonium, struggling to maintain a straight line. With the ESP operating, however, and with its MagneRide variable damper sport suspension activated, the R8 needs only to be pointed in the right direction; driving full bore on a racetrack straightaway is an effortless exercise.

Of course, even a car of this caliber is bound to breed a few niggling complaints. The R-tronic automated manual transmission (otherwise known as Lamborghini’s E-gear) does not shift as precisely as the Bugatti DSG or Ferrari F1 gearboxes. However, the optional manual 6-speed transmission is a snazzy, gated shifter that feels as precise as a Glock semiautomatic pistol.

Oversteer can be reined in with a snap of the steering wheel, but the wheel itself is not as sensitive as a Porsche 911’s or as tactile as a Ferrari’s; hit the red-and-white berm along the edge of the track, and you barely feel a thing. On public roads at triple-digit speeds, the anesthetized steering is not an issue, so it might not be worth adding to the short list of grievances.When conceiving the R8, explains Claus Potthoff, Audi’s head of exterior design, “We didn’t want a supercar like a Ferrari. Instead, we wanted something like a [Porsche] 911, but with a more modern concept.” In the R8’s mechanical layout, like the Gallardo’s, the mid-mounted engine powers all four wheels. With a width of 75 inches, the R8 is as wide as its Bolognese brother. But the R8 is 5 inches longer (174 inches) and more than 3 inches taller (49 inches), and its 3.5-inch-longer wheelbase (104 inches) exaggerates its proportions. The wheelbase creates enough space behind the seats, Audi representatives say, to fit a pair of golf bags. However, drivers taller than 6 feet should not expect to sit comfortably with two sets of clubs so stowed: The parcel shelf is more suited for briefcases than Big Berthas.

Potthoff says the long and low-slung profile presented a problem, because the car’s proportions appeared too stretched. To address this, designers created panels they call “side blades,” which cover the side air intakes, just as the Bugatti Veyron’s panels do. “And they create personalization,” Potthoff says. “You can get them in a metal finish, with carbon fiber, or any color you want.” Like a Bugatti, or a Burger King Whopper, you can have an R8 your way.

Rarely does a car go from the drawing board to the street with most of its original design intact, but the R8 hardly deviates from the Le Mans Concept that debuted three and a half years ago in Frankfurt. Because of impending European regulations, the production car’s side mirrors are bigger than those of the concept, a modification that improves rearward visibility. The twin central exhaust pipes may have doubled in number, to four, and migrated in pairs laterally, but they still are integrated neatly into the rear bumper. And the wheels contain five spokes instead of six. Otherwise, the R8 looks just like the Le Mans Concept.

Like the Concept, the R8 is also reminiscent of the ground-hugging Le Mans prototype racecar (particularly the square taillight details), and its edges are rounded and tapered like an Auto Union Type C racer from the 1930s. “We tried to make a simple shape—not too complex and not too stylish,” Potthoff says. “It’s important to maintain cleanness—what Audi stands for—but you also need some strong elements to gain uniqueness.” Aside from the side blades, unique elements include headlights made solely of light-emitting diodes (LEDs)—an industry first. When the R8 arrives in the United States this fall, it will not be available with the full LED headlights (and Audi says that regulations may prevent the headlights from ever being offered in the U.S.). However, each of the running lights consists of a dozen LEDs, which make the car stand out like a spaceship in the lunar landscape of Nevada’s high desert.

On the desert roads outside of Las Vegas and on the speedway, I drove all day at 100 mph without breaking a sweat. Even bumpy terrain felt relatively smooth in the R8, thanks to what may be the best-damped sports car suspension, period. The R8 was built for daily driving on public roads and autobahns, and if there is a better car for a cross-country trip, I cannot think of it.

While Las Vegas could not be much farther removed from Neckarsulm geographically, both towns are built on a foundation of high stakes and the promise of big wins. Audi visited Nevada seven years ago, when the R8 prototype claimed victory in an American Le Mans Series race en route to its second straight season championship. Audi returned to Vegas to roll out another milestone achievement, and it seems to have hit the jackpot.