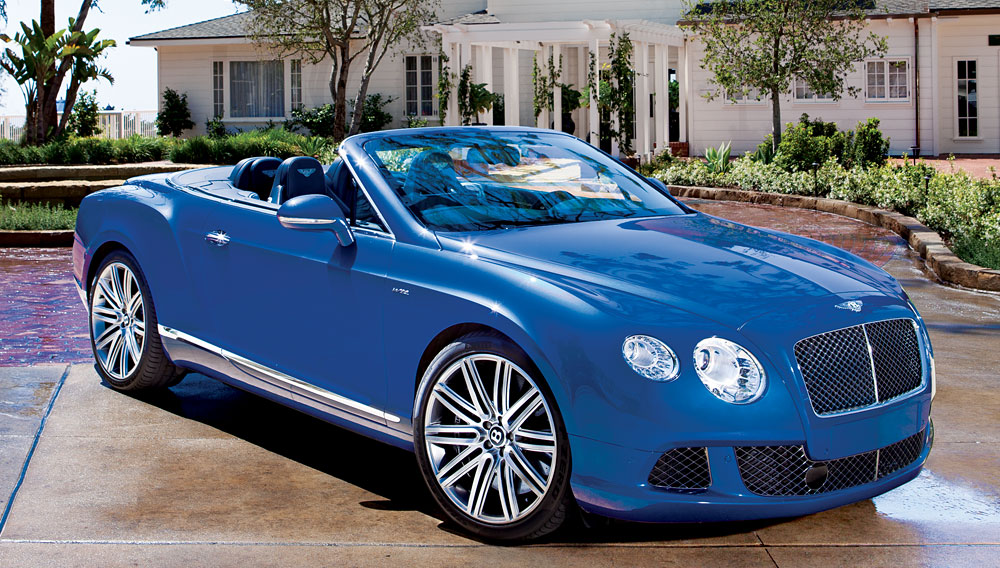 When Bentley Motors brought forth the Continental in 1952, it was the world’s fastest four-seat passenger car and an apogee for the pedigree. A 4.6-liter inline 6 shoved the car along at a then-blinding 120 mph.

This year, for our continued high-velocity driving pleasure, Bentley has introduced the 2014 Continental GT Speed Convertible, which follows last year’s debut of the second-generation Speed coupe. True to the Speed name and Continental history, it is the world’s fastest four-seat convertible. A 616 hp, twin-turbocharged W-12 enables a full gallop of 202 mph and a zero-to-60-mph time of 4.1 seconds. The Speed Convertible, which has a starting price of $238,000, is also the smoothest and most elegant form of highway transportation since the Bugatti Royale roamed Europe in the 1920s and ’30s.

Like any Bentley, the Speed Convertible can be called bulky and overpowered, but its power is appropriate to its weight, which—at more than 5,500 pounds when carrying passengers and a full tank of fuel—suits its regal size. The car’s lines may be viewed as mildly outdated, yet that is the shape that Bentley owners have embraced, and it is a testimony to the Continental’s design thoroughness and substance of build.

Bentley does not waste the skills of its craftspeople on inferior materials; the company’s metals, woods, leathers, fabrics, and paint are premium. Search the soft, luscious, spacious, and diamond-quilted interior all day, and you will not find a stitch out of true.

Since introducing the Continental GT in 2003, Bentley has produced two generations and a dozen variations on the original theme—from the introductory two-door to the Flying Spur four-door, from Supersports special editions to a Zagato-bodied GTZ limited issue, from the 500 hp Continental GT V8 to the new 616 hp W-12 Speed. The Continental GT’s style and purpose immediately gained solid traction with buyers, and so to improve it over the past decade, Bentley has taken only small and cautious steps, not large and risky leaps.

Paul Jones, a Bentley engineer and product-line director, acknowledges the formula and draws a comparison between the original Continental GT and an automotive icon with an endearing and enduring silhouette and a longevity the Bentley may eventually emulate. “The 911 is what made Porsche hit the big time,” he says. “The 2003 Continental GT is similar in that it represents the highly successful rebirth of Bentley under Volkswagen ownership.” (In a complicated transaction, Volkswagen acquired Bentley in 1998 at the same time that BMW acquired Rolls-Royce, which had owned Bentley. BMW, which had already been supplying engines and other components for Bentley cars, continued to do so until 2003, when the Continental GT debuted as the first Bentley model produced under Volkswagen ownership with no help from BMW.)

Continentals both ancient and modern are overengineered heavyweights that are set lower for stability and deliver more horsepower than any of their stablemates; they flatten hills into gentle slopes. Yet their power is managed carefully. “The Continental GT has been a successful formula for us as an everyday supercar that is really two cars in one,” says Jones. “It is easy to live with, has good visibility, four seats, and the ability to drive you great distances in complete comfort. Then put it in Sport mode, and the edginess comes in. And if you want a bit of drama in your driving, and there are twisty bits about, well, you’re still in the right car.” The challenge now, he says, is “not losing all of those things that make the GT a great car—not losing our way is a big responsibility.”

The new Speed Convertible sits one centimeter lower than the standard Continental GT convertible (the GTC), and Bentley has increased the engine’s power from 567 hp and its torque from 479 ft lbs to 590 ft lbs. The blessing here is that nearly all of the torque kicks in at 1,700 rpm, creating, according to Jones, “less of a torque curve, more of a power plateau.”

The visual features that distinguish the Speed are subtle; probably only the most ardent Bentley disciples will notice the new model’s exclusive 21-inch wheels, ash-gray mesh grille, air intakes in the corners of the front bumper, and oversize ovoid twin exhaust pipes. The quilted upholstery, exclusive Speed tread plates, and drilled-alloy pedals are standard touches for the interior. Bentley also has a bazaar of optional odds and sods for the cabin and the exterior: an engine-turned dashboard, contrast stitching for the leather, a chrome radiator and grille, carbon-fiber bits and pieces, and a vast selection of body colors, hides, and wood finishes. Bentley also offers the Mulliner Styling Specification package of splitters, strakes, and diffusers for buyers to rummage through and raise the ante to $284,000.

Mechanically, the Speed Convertible is a twin of the Speed coupe. Both have all-wheel drive and share the same ZF 8-speed gearbox and Bosch ME17 engine-management software. Both cars also offer a choice of four shift-point and suspension settings, ranging from Comfort to Sport. Bentley developed the gearbox to squeeze the maximum number of miles per gallon of fuel burned. The Speed’s U.S. city-highway fuel efficiency is 15 mpg, which is a respectable rating for a car of this girth and gait.

For the global launch of the Speed Convertible earlier this year, Bentley invited a United Nations of automotive journalists to cruise California, Arizona, and Nevada at the wheels of a dozen GTs. San Francisco and Scottsdale, Ariz., were the tour’s sophisticated origins. Then came the grandeur of the Grand Canyon, the deadly wilderness of Death Valley, and the preserved stretches of Route 66, lined with pink and turquoise motels, aluminum-sided diners, and Burma-Shave signs.

The highway’s long, lonely stretches are made for top-down driving. With the roof up, the Speed Convertible’s cabin was as quiet as a tomb. With the ragtop down, it was only marginally noisier—the voice of the navigation system and ordinary conversations remained surprisingly audible—and slightly cooler; the neck warmers and the cabin-wide draft deflector allowed drivers and passengers to politely ignore the few patches of chilly air encountered at Grand Canyon National Park.

The Speed Convertible’s ride and stride never faltered—not when dawdling through high-desert villages and Navajo reservation towns or when accelerating to 130 mph and beyond just to see if the car lived up to its press releases. The Speed Convertible drives lighter and much smaller than its numbers suggest; traveling at 130 mph felt more like a flat, safe, secure, and legal 70 mph pass. But with its booming, explosive acceleration, the Bentley brings adventure, exhilaration, and maybe even a tickle of fear to the motoring experience—rather like the Porsche 911 does.