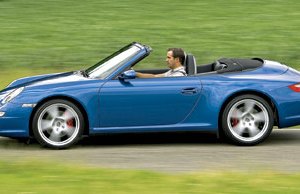 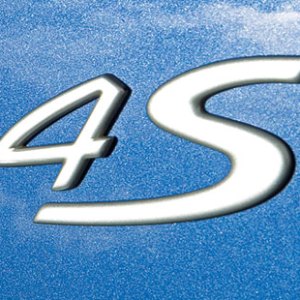 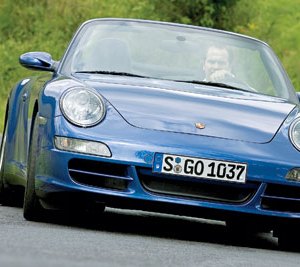 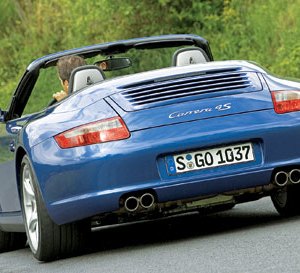 Driving the 2006 Porsche 911 Carrera 4S Cabriolet is not an experience that will make you hold on to your hat, at least not literally. Surging through a narrow, curvy stretch of autobahn on the outskirts of Cologne at 140 mph with the top down and both hands clamped on the steering wheel, I have no fear of either the car—Porsche’s topless version of its four-wheel-drive rendition of the 997 Carrera S (hence the Carrera 4 nomenclature)—or my baseball cap’s sailing into the surrounding forest. The wind and noise levels in the cockpit, as well as the handling proficiency, mimic those of a closed 911 coupe.

Closed or open, a 911 is characterized by the manner in which it handles twists and turns. The true 911 devotee savors the opportunity to, as he might say, “bend” one into a corner at what seems to be a faster than feasible speed. This act requires a delicate balance between turning the steering wheel and feeding the throttle just enough to keep the rear wheels engaged with the tarmac. When performed correctly, the effort produces the sensation of the chassis’s conforming, or bending, to the contour of the road. Allowing the front wheels to become involved with anything more than steering could jeopardize drivers’ ability to practice this art form. The challenge then for Porsche was to add a four-wheel-drive system that would make the 911 easier and safer to drive fast in all types of weather without intruding on the fun.

In the $97,000, 355 hp Carrera 4S Cabriolet, Porsche has incorporated a system that is tuned more for handling finesse than brute power. It utilizes a multidisk viscous clutch and silicon fluid to maintain a minimum of 5 percent power delivery to the front wheels and a maximum of 40 percent when traction conditions demand it. Porsche claims that the forward delivery of 5 percent of the available torque enables the front wheels to pull the car around corners, increasing handling prowess without compromising steering feel or the car’s willingness to turn into a corner. That is to say, the system does not contribute to understeer. The silicon fluid allows for immediate transitions in power delivery fore and aft, even if the driver jams on the throttle or slams on the brakes. A primary advantage of a viscous—as opposed to mechanically controlled—system is weight savings. At roughly 110 pounds, the 997 system (essentially the same as that of the prior 996) weighs half as much as the first all-wheel-drive system used in the Type 964 911 in 1988.

The C4S comes standard with Porsche’s Active Suspension Management System (PASM), which features a ride height that is .39 inches lower than the conventional suspension. PASM also includes adaptive dampers that are continuously adjusted at each wheel by accelerometers reacting to the car’s lateral acceleration, steering angle, road speed, brake pressure, and engine torque. PASM has two driver-controlled settings: Normal mode for comfortable cruising and Sport mode, which stiffens the suspension for optimum agility. The change in demeanor is dramatic. Your dentist will recommend the normal mode for when you traverse cobblestone streets. Normal mode also is ideal for long-distance autobahn cruising, but the true 911 enthusiast likely will spend most of his driving time battened down for action in Sport mode.

Porsche also includes its Stability Management (PSM) on the all-wheel-drive models to perform a couple of functions that address the extra weight. One goes into action whenever the driver abruptly lifts his foot off the gas, which typically occurs in emergency braking situations. PSM responds by dispatching a shot of brake fluid that nudges the brake pads against the rotors and reduces the reaction time—and ultimately the stopping distance—if the driver’s foot is indeed headed for the brake pedal. The second function, called brake assistant, provides optimum brake force to activate the ABS if it determines that the driver wants to stop quickly but is not applying enough brake pressure. The brakes produced no unnerving or awkward moments while stopping the C4S—including when a VW Polo ambled into the fast lane during an autobahn storming run.

Porsche, which has a reputation for providing its cars with the best stopping power short of a parachute, has endowed the all-wheel-drive Carreras with larger diameter brake cylinders and larger brake rotors than those of their rear-drive siblings. The C4S comes with pizza-pan-sized 13-inch vented and cross-drilled rotors fore and aft. Even larger (though they weigh half as much) 13.78-inch ceramic composite brake rotors are an option.

The all-wheel-drive models’ most visible distinctions are the larger rear wheels and tires, which increase the rear track for better handling. The C4 uses 1-inch wider, 11-by-18-inch wheels with 295/35 ZR 18 rubber, and the C4S wears deeper offset 11-by-19-inch wheels with 305/30 ZR 19 tires. To cover the massive new rubber, the haunches of the Carrera 4 and 4S billow out an additional 1.73 inches, making its rear even wider than the current 996 Turbo’s.

Other C4/C4S Cabriolet styling features also are exercises in form following function. The convertible top flows smoothly into a humpbacked rear panel just ahead of the engine cover, contributing to a drag coefficient (0.30 for the Carrera 4 and 0.29 for the Carrera 4S) identical to the coupe’s. This allows their top speeds, 174 mph (for the Carrera 4) and 179 mph (for the Carrera 4S), to equal those of the four-wheel-drive coupes. An additional 300 pounds of heft compared to the rear-drive coupe slows the zero-to-60-mph sprints by 0.2 seconds—4.8 seconds for the C4S and 5.1 for the C4—a difference that may be detected on a stopwatch but not likely from the driver’s seat.

The entire top mechanism accounts for only 93 pounds of extra avoirdupois and can be raised or lowered, along with the side windows, in 20 seconds—while the vehicle is moving at speeds as fast as 30 mph. The optional aluminum hard top now fastens with bolts rather than bayonets for true all-weather protection.

Despite all of the high-tech innovations hiding under its muscular flanks, the C4S represents the type of evolution for which Porsche and the 911 are renowned. The styling is modern yet recalls all previous six generations of the 911. The cockpit—grown plush with finely stitched leather, high-output audio, and a navigation system—still has the ignition key to the left and the tachometer staring directly back at the driver from the middle of the instrument panel. The raspy growl of the exhaust evokes the aural pleasure of the 2.7 RS. You may not lose your hat, but you could lose your heart to this car.