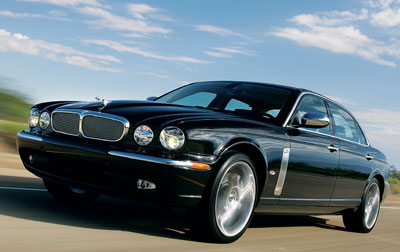 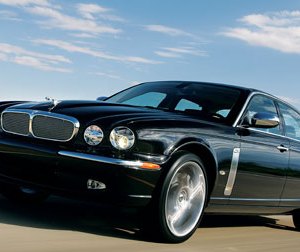 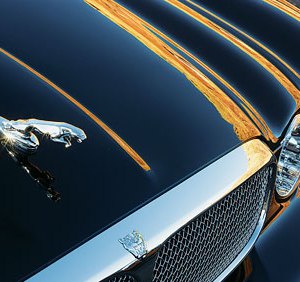 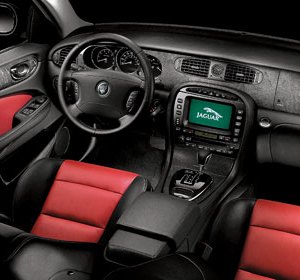 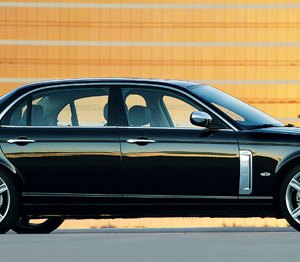 The audacious alloy vents along its front fenders, the 20-inch alloy wheels, the bulge flowing smartly down the middle of the hood, and the pair of ominous large-bore exhaust pipes poking out from below the rear bumper together suggest that Jaguar’s new Super V8 Portfolio is one fierce feline. This appearance is not a pose. Under the hood of this limited edition XJ is a 400 hp, supercharged dohc four-valve V-8 engine that enables the big cat to leap from zero to 60 mph in five seconds.

More significantly, with its superior styling and performance, the Portfolio indicates that Jaguar finally has abandoned its attempt to be all things to all car buyers, and that although the improved yet still pedestrian X-Type remains in the catalog, the company once again is concentrating on building high-quality, high-style, high-performance vehicles that blend new technology with old-fashioned craftsmanship.

The Portfolio, of which Jaguar will produce only 150 for North America, is the flagship of the 2006 XJ Long Wheelbase fleet that includes the plush Vanden Plas and the sporty Super V8 models, along with the basic but hardly plebeian XJ8 L. (Each of these LWB XJ models offers additional rear legroom without compromising luggage space because Jaguar has stretched the wheelbase 5 inches, to 124.4 inches total.) The Portfolio descends from the Concept Eight show car, which first appeared at the 2004 New York International Auto Show, when Jaguar introduced the Long Wheelbase version of the seventh-generation XJ. Just 12 months later, the Super V8 Portfolio appeared at the same show, bearing the same deep, rich metallic Black Cherry paint—a combination of black and red that changes hues in response to lighting conditions—and the same prominent front fender vents as the Concept Eight. (Jaguar also offers the Portfolio in a less dramatic champagne color.) The company scaled down the show car’s 21-inch alloy wheels to 20 inches to improve durability and ride comfort, and Jaguar replaced the Concept Eight’s full-length, fixed-glass roof panel with a conventional sunroof. For safety purposes, Jaguar installed side-curtain air bags and its Adaptive Restraints Technology System (ARTS), which, using ultrasonic technology, determines the size of a front-seat passenger and accordingly adjusts the airbag’s thrust. Jaguar retained the Concept Eight’s highly polished mesh grille.

As it did with the Concept Eight, Jaguar built the Portfolio from an aluminum monocoque that makes it as much as 800 pounds lighter than the BMW 760Li, enhancing its performance and fuel economy. Jaguar has a long history with aluminum bodies, having used them to build the XK 120 sports cars in 1948. Indeed, as early as 1922, Sir William Lyons employed aluminum for his motorcycle sidecars, from which the Jaguar automobile evolved. And in the 1950s, Jaguar built its Le Mans–winning C- and D-Types from aluminum.

Within the Portfolio’s aluminum shell, Jaguar designed an interior intended as a showcase for the brand, and so it has crafted a cabin that is sporty, elegant, and well tailored. In addition to a herd’s worth of soft, chestnut-colored hides that cover the seats, steering wheel, and much of the ancillary trim, the interior has lamb’s wool carpet mats, and it features American black walnut on the dash, center console, door panels, and fold-down picnic trays in the front-seat backs. The Portfolio has two-plus-two seating that gives rear-seat passengers more than ample legroom, as well as power-adjustable backrests, three-stage seat heaters, four-zone climate control, and individual controls for the DVD-entertainment system that features 6.5-inch video screens in the front-seat headrests.

After a fast-paced jaunt along Interstate 15 just outside Las Vegas, we let the Portfolio loose on the long straights through the Valley of Fire, which are punctuated by occasional up-and-down hill twists around wind-honed red rock formations. With the big Jag as a willing accomplice, we fail to abide by the ludicrous 35 mph speed limit assigned to this vast, uninhabited, ancient seabed, where oncoming traffic is visible from miles away. The Portfolio romps through turns with the agility of a sports car. The extended wheelbase provides added stability through the sharpest bends, and the steering offers excellent feedback and sensitivity, as good as or better than that of any premium sedan. Because of the adaptive suspension, the ride and handling also are exemplary, although the 9-inch-wide wheels and low-profile 255/35 tires do transmit their displeasure with rough patches of road.

Our only complaint about the engine involves the overzealous traction control. Tromp on the gas pedal, and the traction control responds as if someone were on the other side of the firewall pushing back. It takes the edge off having 400 horses underfoot.

The truly disappointing thing about the $116,000 Portfolio is that all 150 have been sold. However, the standard Super V8, priced at $92,000, is basically the same car, minus the big wheels, fancy paint, and side vents. It may appear tamer than the Portfolio, but this car is no less ferocious.