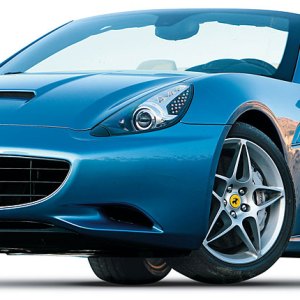 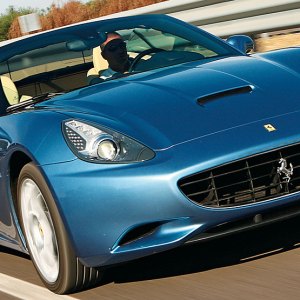 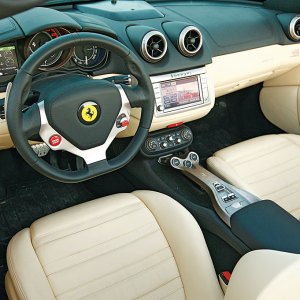 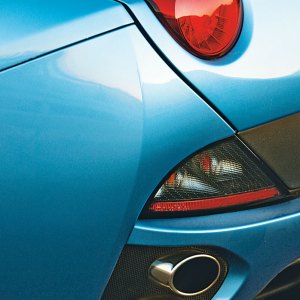 Ferrari traditionally names its automobiles after members of the Ferrari family and Italian locales: the Dino, the Enzo, the Maranello, and the Modena, for example. The Italian sports car manufacturer rarely deviates from these naming conventions, except perhaps when it honors its long-standing love affair with California.

In 1957, Ferrari created the now-classic 250 GT California convertible specifically for West Coasters who savored high performance and the feel of wind in their hair. The automaker’s latest token of affection for this breed of driver is the highly anticipated 2009 Ferrari California, a back-to-basics, direct-injection V-8 convertible sports car—albeit one with a retractable, aluminum-paneled hard top. The California’s 454 hp engine is certainly adequate, given the car’s 3,857-pound curb weight. However, Ferrari designed this model more for sunset drives along the Pacific Coast Highway than for blasting down a back straight. This is not your run-of-the-mill Italian racecar.

Visually, the California bears a family resemblance to those original long- and short-wheelbase Californias. One need look no further than the squashed-ovoid, milk-crate grille, the gills on both forward flanks, and the hood air scoop to recognize familiar design cues.

Key lines from the early GTs and the modern Grand Tourer drop-top also reappear, such as the car’s long snout and the distinctive rearward placement of the cabin. There are limited ways to shape a rear that must also store several layers of aluminum top, plus mechanisms. Consequently, the trunk is short and humped, but with a slight forward hunch. This creates an optical illusion of eagerness found in many high-performance cars.

Some purists could argue that this new California reaches too far into the past. It is too soft, they might say, too conservative, or too similar—God help us—to a Corvette. These individuals firmly believe that a Ferrari should be more like an F-16 crossed with a flamethrower. They do not subscribe to elegant leisure. They have no time for lying back, living alfresco, smelling the Pacific, or cracking crabs over microbrews surfside at Gladstone’s in Malibu.

The California may disappoint these drivers. Ferrari created this car for a different mission, one that involves coastal roads rather than racetracks. Does this softer, less ferocious automobile intentionally embody the spirit of innovation and laid-back youthfulness of California? “Of course,” said Luca di Montezemolo, chairman of Ferrari and its parent company, Fiat, during a recent press drive in Sicily. This car, he said, is a deliberate gesture of gratitude to a country that accounts for approximately 30 percent of Ferrari sales—and to a state that alone accounts for a significant part of that business. “Our love for the United States is something that grows,” he said. “It was the first country to really understand Ferrari. In the United States we have the best collectors, the most important people, and, of course, people in the movie industry.”

The Golden State, he noted, is the perfect breeding ground and habitat for the untamed Ferraristi. Yet there is much more to the 2009 California than the chrome badge affixed above the glove box, which imitates the red-script font found on the state’s license plates.

“For me, as chairman of Ferrari for 17 years, I have never done anything like what I have done with this car, [which is] build a strategic vision,” Montezemolo said. “We had the 12-cylinder cars [the 599 GTB Fiorano and the 612 Scaglietti coupes], then the fantastic go-carts, the 430s [the V-8 coupe, Spider, and Scuderia], so there was a place for a different car, a car with more room inside and a car that is either a coupe or a convertible. You can drive it slowly, but if you push it, you know you are driving a real Ferrari.”

Montezemolo—who in Italy enjoys the kind of adulation normally reserved for rock stars—also acknowledged being somewhat annoyed by early buzz surrounding the California. “I was scoglionato [Italian for ‘pissed off’] at talk of a small, cheap Ferrari,” he said. “The California is a car with fantastic drivability, but also fantastic power. But the best elements are its stability and its comfort; you can enjoy it with four persons with luggage. It is not a small Ferrari, but a big Ferrari. It is a tribute to the early Californias, and a tribute to America, our largest market. So our range of products is complete. And I am happy.”

The Pininfarina-drawn California features an array of notable mechanical and design components. The vehicle’s 4.3-liter V-8 is similar to that found in the F430. Its retractable hard top hisses down in 14 seconds. Seating, that old bugaboo of sporting automobiles, is surprisingly comfortable. What’s more, the interior features the kind of fine Italian leatherwork found in four-figure loafers.

The California’s suspension includes a multilink rear, which is a welcome complement to the traditional double-?wishbone front. A new 7-speed dual-clutch transmission delivers quick, optimum shifting, either automatically by push-button or manually by paddle. According to Massimo Fumarola, director of product development at Ferrari, a pure manual is on the way, for traditionalists who like “pressing the clutch and engaging a gear in the gate.”

The California employs the same system of manual switching of handling modes that the F430 does, but it offers only three settings rather than the usual four. The Comfort, Sport, and Off options affect shift points, suspension settings, and traction-control thresholds in impressive ways. But Race—that joyful position found in Ferrari’s more aggressive cars—is, regrettably, absent.

Sicily provided a perfect setting for trying out these handling modes and putting the California through its paces. Speed limits here are rarely enforced, and when they are, the police present only a token menace in their piddling Fiat Puntos. A few dashes on the A29 highway southwest of Palermo validated Ferrari’s advertised claim that the California does zero to 60 mph in under 4 seconds. Several blasts to 180 mph—with pedal to spare—left no doubt that the car can achieve its listed top speed of 193 mph.

However, in the Sicilian mountains, on slippery two-laners crowded with mudslide debris and wandering sheep, the car’s electronic safety systems frequently interfered. The steering is tight, yet the car’s back end can lose traction. The threshold—the reaction time of electronic traction controls that halt slides—seemed a bit slow. This may or may not have contributed to an incident during the test-drive in which an Israeli journalist lost it on a downhill right-hander and savagely slammed his car into a country wall. Luckily, he was not hurt.

After this incident, Dario Benuzzi, a veteran test-driver, explained that the reaction-time delay we felt in the suspension system’s traction controls was deliberate—a claim that many of us driving that day found hard to believe.

It should be noted that later, Montezemolo raised his glass to toast the good fortune of the driver who had survived the crash, and the tough engineering of a car that kept him alive. Outwardly, Montezemolo was gallant about it all. Yet we suspect that behind his mask of graciousness, he was, in fact, scoglionato.

Expect some tweaking of the suspension software before the first fleet of 400 Californias goes on sale in the United States in June.