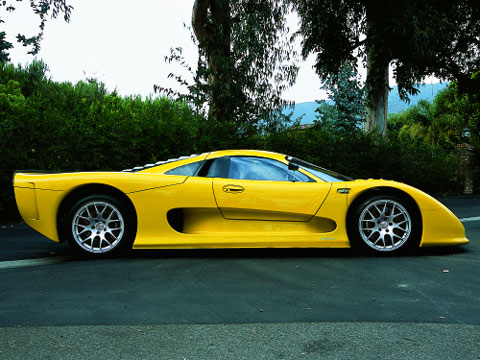 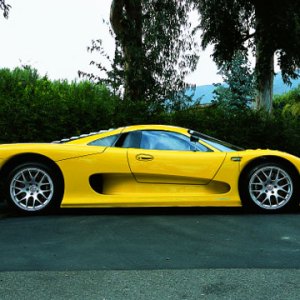 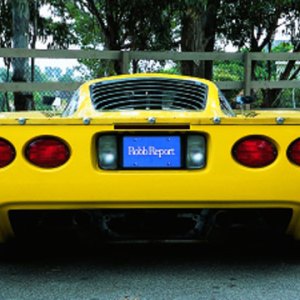 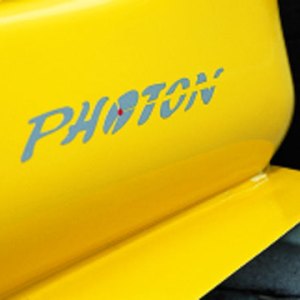 I had no idea what was in store when the people from Mosler called and offered me a drive in their new $209,000 MT900 Photon. I’d heard about the company’s latest efforts and thought it would be a hoot to pester my neighbors with what had been described as the closest thing ever to a genuine racecar for the street. A flatbed truck pulled up to our offices with the waist-high Mosler strapped on its back, like a giant yellow limpet stuck to a rock. It is wider than a California King. My first thought was whether the life-size slot car could back down the ramp without grinding off the front air dam or street-sweeping side skirts. But the tow truck’s driver deftly used a pair of two-by-fours to lessen the angle of descent and silently rolled the brute onto the pavement. It would be the last silence anyone in the vicinity would hear for a while.

The arrival of sports and luxury exotics at the Robb Report offices is a frequent occurrence, and each new delivery elicits requests from car-oriented colleagues for an opportunity to drive, or at least be driven, in the car-du-jour. Most evaluations involve a rotation of eager passengers, whose only complaint is that their seat time in the car is too brief. But after their first eardrum-rupturing rides, the usual suspects—to a man—declined further opportunities to sample the Mosler. I deafened our photographer, reduced an automotive editor to speechlessness, and did permanent synaptic damage to our VP controller, who, after a 45-minute ride, may never crunch a number again. Messrs. Kooyman, Gulliksen, and Del Duca have not been the same since. Others fared worse still.

The culprit for the noise is the Mosler’s Hewland gearbox, which is a 6-speed, straight-cut design that has no business in a street car but every reason to be used in racing applications. It is a $20,000 option (standard on the Photon) over the MT900S model’s Porsche-derived 6-speed synchronized transmission. While quicker to shift and more durable on the track, it makes for a wholly intolerable street-driving experience. Less adept drivers will find upshifts (when they can be executed at all) agonizing, made all the worse by a constant gear whine, crunching, and clattering that renders conversation impossible and sets occupants’ heads pounding at any rpm or speed. Think of an MRI gone rogue. If anyone has the stamina to buy a Mosler for club-hopping or just for Sunday drives, he should do everyone within earshot a favor and settle for the synchro gearbox.

So what exactly is the Mosler, and what is it made for? The MT900 was developed by Warren Mosler, and its seductive body was designed by Rod Trenne—hence the MT designation. Mosler’s first foray into the limited-production, high-performance arena was back in 1990, with his homely but capable Consulier. Cursed with a shape that only its designer could love, the Consulier and a more evolved V-8 descendant put Mosler in the running with serious performance addicts. Fast- forward to the MT900, a car designed for professional-level Grand-Am series racing and capable, according to Mosler, of the fastest lap times of any U.S. road-legal automobile on tracks such as Daytona, Sebring, and Laguna Seca. Lotus engineering was involved in EPA certification for all 50 states.

Powering the monster is a Corvette Z06–derived, 435-hp engine that delivers staggering acceleration. Any similarities with the Z06 begin and end with the door handles and taillights lifted from that car’s parts bin; though they share the same powerplant, the Photon is a 1,980-pound racecar with a power-to-weight ra-tio of about 4.5-to-1. The car’s primary structure is a carbon fiber and aluminum–sandwich composite tub, with tubular front and rear subframes. It has adjustable sway bars and adjustable suspension at both ends. The engine is midmounted, with more than 60 percent of the car’s weight planted over the rear wheels. Braking is abundant, with 13-inch discs up front, 12-inch in the rear, and Wilwood calipers stopping 18-inch BBS wheels shod with Pirelli P-Zero rubber. ABS was absent—and unnecessary—for all practical applications. With a vision-distorting Lexan windshield, it is difficult to imagine anyone intentionally driving the Photon at night or in the rain. (Click image to enlarge)

The carbon fiber body is beautiful and manufactured to a higher level than other competition cars, but understand, it is made to racecar specification. This will disappoint those expecting the fit, finish, and heft of Lamborghinis, Ferraris, and other exotics. This car is lightweight and serviceable, and its scissor doors, twist fasteners, and nonexistent ground clearance constantly remind the driver that this body was designed for track speeds and surfaces, not for driveways, speed bumps, or the scrutiny of concours judges.

Carbon fiber dominates the interior, which is clearly designed for racing but remains surprisingly comfortable and roomy. The Sparco seats—a personal favorite—feel just right, controls fall readily to hand, and pedals to feet. Instrumentation is provided by a full-featured STACK display. Steering is not a terrible chore, despite the absence of power assist, but the driver must be ever vigilant when extracting even modest performance from the Mosler. This car gets fast in a hurry, and with its rear-weight bias, it is not given to going in a straight line without coercion. Steering feel, as well as feedback from suspension, brakes, and wheels, is superb, and driving roads with lots of curves is an absolute blast. Drivers like this writer will be happily entertained, and great drivers will be rewarded.

Amenities are few, though good air-conditioning—a must in cars so designed—and frivolities like finicky electric windows pay lip service to modern creature comforts. The MT900S (for street) is a more sensible solution than the MT900 Photon. It is slightly heavier, at 2,200 pounds, and less costly, at only $159,000. It offers a custom leather-trimmed interior, a glass windshield, softer suspension settings, and so forth. Apparently, our example was equipped with a great stereo/CD player, which, of course, served no practical use when driving, apart from its clock function. I suspect it provides ambience while dining, parked at one’s favorite drive-through restaurant, where the Mosler will doubtless attract throngs of patrons. (We did not try this.)

The Mosler drew more attention than any other vehicle we have ever had in our possession. Period. Traffic parted, drivers made U-turns, one young woman even put down her cell phone to ask whether the driver was famous and what the car was. Let’s make no mistake, driving a conspicuous automobile—and such an obstreperous one as the Photon—can quickly become tedious. But none of this is the fault of the Mosler; after all, this brilliant automobile belongs on the track, and any pretension to street-worthiness comes at the risk of being the center of everyone’s attention. Shy drivers beware. This is an extreme vehicle that promises an extreme driving experience. The Photon is for everyone who ever thought he wanted a real racecar for the street. Just be careful what you ask for.