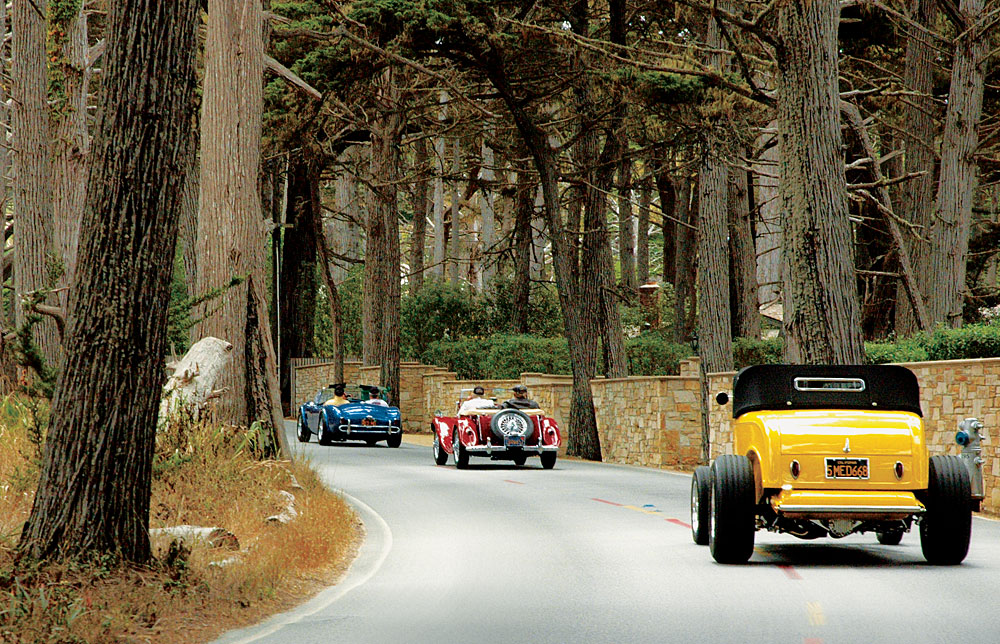 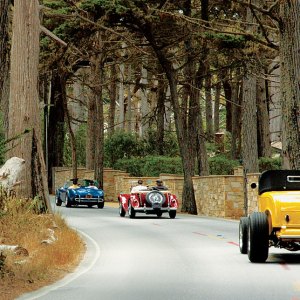 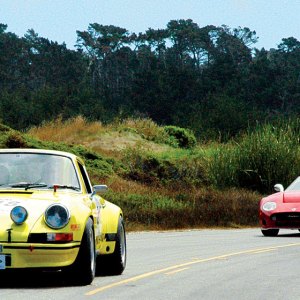 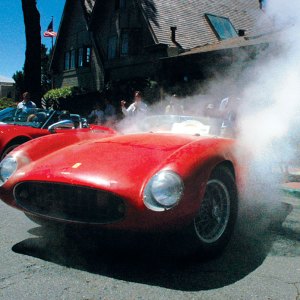 Like any modern wheeler-dealer, Tom Shaughnessy, a Ferrari car and parts dealer from El Camino, Calif., spends a lot of time on his mobile phone. That phone is a source of frustration on this mid-August morning, because we are in the Del Monte forest on the Monterey coast’s famed 17-Mile Drive, where cellular reception is about as reliable as the ignition of the 60-year-old Italian racecar in which we are traveling. “I’m selling this thing at the Gooding auction on Saturday,” Shaughnessy explains apologetically between dropped calls.

The thing to which he refers is the unrestored, right-hand-drive 1948 Ferrari 166 Spyder Corsa that he is piloting. The car is dirty; Shaughnessy chose not to wash it before the rally.

Holding the phone to his ear with his right hand, Shaughnessy alternates between the well-worn shift lever and the steering wheel with his left hand. His left leg works the clutch, which occasionally drips transmission fluid onto his bare calf. “I’m a little anxious about these hills,” he confesses, referring to the route we eventually will follow through Carmel, to the city’s inaugural Concours on the Avenue. “This car was not built to go slow.”

This racecar—chassis number 014I—is likely the 12th vehicle that Ferrari constructed. Raymond Sommer, the “French Lion,” is said to have raced the vehicle when it was a factory team car competing in the Targa Florio and various Grand Prix events from 1948 through 1952. It survived those tests, but Shaughnessy fears it will not finish the 10th annual Quail Rally.

However, given that the annual affair is limited to only 30 drivers, just being in the rally is a notable achievement. “This event is really a Who’s Who of the car world. These guys are mostly billionaire car collectors. I’m just honored to be here, considering I’m one level above busboy in this crowd,” Shaughnessy says jokingly, but without smiling.

The rally, a two-day event held each August that this year would cover only 180 miles, “is just for enthusiasts; it’s simply fun,” says Sir Michael Kadoorie, who organized the first Quail Rally a decade ago. “We’ve cut our rally shorter so that people don’t feel like they’re being regimented: 6 o’clock here, 4 o’clock there.”

These particular enthusiasts—many of whom also participate regularly in the Pebble Beach Tour d’Elegance, a more competitive event that takes place the same week as part of the itinerary of events surrounding the Pebble Beach Concours d’Elegance—are among the world’s most serious car collectors. And they like to take their treasures out of their garages and onto the road.

“Michael [Kadoorie] loves driving his cars, so he put together this rally,” says Bruce Meyer, president of the real estate holding company Meyer Pacific and a founding chairman of the Petersen Automotive Museum in Los Angeles. “There’s no judging. It’s just a group of guys who are really into cars getting together, sharing ideas, scrutinizing each other’s cars, and enjoying this cordial atmosphere created by Mr. Hospitality himself.”

Hospitality is Kadoorie’s avocation and his profession. In addition to being part owner of the nuclear power generator that lights most of Hong Kong in his native China, he also is chairman of the Hongkong and Shanghai Hotels company, which operates the Peninsula hotels and the Quail Lodge Resort & Golf Club in Carmel, the rally’s host.

On the Friday prior to the main event at Pebble Beach, the Concours d’Elegance, the lodge hosts a concours of its own that is formally titled The Quail, A Motorsports Gathering, but is known as simply the Quail. In the five years since the Quail’s debut, its admission tickets have become the most difficult to obtain during the Pebble Beach week. “This year we even had to turn away a couple famous racecar drivers; we simply did not have enough passes,” Mathias Doutreleau, special events director at Quail Lodge, says with a pained expression and a shrug.

“Previously the space was occupied by Concorso Italiano, which began at the Quail until growing to such a size that they needed more room,” Kadoorie explains. Five years ago, the Concorso moved to its present location at Blackhawk Golf Course, and Kadoorie introduced the Quail. “We looked to reduce its size, to really uplift it and make it something—I wouldn’t say more special, but a different event, which would appeal to people who wanted a relatively quiet day to see beautiful cars and not be overcrowded.”

Thus, Kadoorie limited the Quail’s capacity to 3,000 attendees, which falls far short of the demand; this year, the event sold out almost three months in advance. “Pebble Beach is of course the queen, and the event that’s lasted some 55-odd years in a magnificent setting,” Kadoorie says. “But if you’ve come all this way to the Monterey Peninsula, you might as well enjoy a wider selection.” This year’s selection featured Briggs Cunningham racecars and Ferrari 250 GT Series 1 Cabriolets. The latter display included 16 cars, which is about half of the Cabriolet production run.

“It was time to change,” says Gordon McCall, a former consultant to Christie’s auction company who recently was hired by Bonhams & Butterfields in the same capacity and who also serves as a consultant for the Quail. “[Concorso] was a gate-driven event that got too big.” The Quail, on the other hand, remains intimate. “Our first event was criticized a little bit for its ticket price,” he says, explaining that food and beverages are included in the admission fee. “You eat your way through the day,” McCall quips. “The Quail is what would happen if you went to a five-star restaurant and a car show broke out.”

The Quail Rally immediately precedes the lodge’s concours. Originally it comprised the cars of “just six or seven of Sir Michael’s friends,” says Doutreleau. “Chip Connor, Bruce Meyer, Peter Mullin, and a few others” were among the first participants. But over the years, the rally roster has expanded to include friends of friends, and now its capacity has reached 30 drivers—some of whom bring along a different car each day. “The rally’s motto is ‘a good drive with good friends for a good cause,’ ” Doutreleau says, explaining that proceeds raised from the rally’s $2,800 entry fee go to the California Highway Patrol 11-99 Foundation and other local charities.

The Quail Rally reflects its organizers’ sense of humor—the rally officially commenced this year when Quail Lodge president Lawson Little fired a potato gun at a remote-controlled airplane, just for fun—and a sense of adventure. “The route is always a total surprise,” says Roger Morrison of Salina, Kan., who owns agriculture and mining businesses. “You don’t know until the morning of the event where you’re going or what you’re doing. One year we raced go-karts. Another year we had lunch on the top of a mountain, complete with a flyover of vintage World War II airplanes.”

On the opening morning of this year’s Quail Rally, Kadoorie kneels in the moist grass, screwdriver in hand (the tool, not the cocktail), craning his head and neck under a Bentley coupe in an effort to help his support staff affix a temporary tag to the car’s front bumper.

“This is the kind of event to enjoy people and cars, but people first,” Kadoorie says later that morning, before the start of the rally. “The most important things are the friendships. There are a few openings each year, but for the most part the participants return year after year; the people are the same.”

Then Kadoorie wraps his arm around close friend Arturo Keller and says with a laugh, “Arturo and I have some things in common. I sing ‘Cielito Lindo’ very poorly and he sings it very well.”

Keller, an auto parts magnate from Mexico, has a ranch in Petaluma, Calif., on which he stores a classic car collection that makes the Mercedes-Benz museum in Stuttgart, Germany, appear quaint by comparison. “I can say it, because he is a modest person, but of private collections in the world, Arturo’s is probably among the top three,” says Kadoorie. “Ask anybody who has been to it.”

For this year’s rally, Keller and his wife, Deborah, have brought along a 1929 Mercedes-Benz SS by Murphy Coachbuild, one of only two such cars in existence. “But,” Keller says, “this is the best one.”

For the Quail Rally’s long, slow ascent into Carmel, either Mercedes might have been preferable to Shaughnessy’s Ferrari. As rally participants, we are de facto guests of honor at the inaugural Concours on the Avenue, a status that requires us to steer an overheating antique racecar through hordes of gawking pedestrians, while driving uphill.

The instant we exit the car, the radiator explodes, enveloping the automobile in a cloud of white steam. Green fluid drains into the gutter, signaling the demise of the racecar and the loss of our ride for the next day.

Fortunately, before day two, I will make fast friends with another charitable rally participant, Roger Morrison, who will ride shotgun and allow me to take the wheel of his 1967 AC Shelby 289 Cobra. Somewhere past the halfway point of our drive and well into the bucolic landscape east of Monterey, Morrison and I will trade his Cobra with another rally driver for a red Mercedes-Benz Gullwing coupe, which we will drive for the remainder of the day.

As for Shaughnessy, he will sit out the second day of the rally but then find solace the following weekend at the Gooding & Co. auction at Pebble Beach, where his Ferrari will fetch $1,045,000. That’s not a bad take for a dirty, old racecar with a busted radiator.