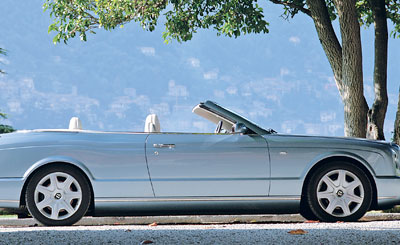 Among the millions of tales concerning the Emerald Isle is the one about the Aer Lingus captain, who, upon his airliner’s approach to Shannon Airport, advised the passengers, “We will shortly be landing in the Republic of Ireland. For the local time, please set your watches back two centuries.”

The tale is not exactly a tall one, for north of Shannon, across the postcard county of Galway and into the equally lush and tenderly farmed Mayo, is the 800-year-old Ashford Castle hotel. Like most of Eire in one century or another, the castle was once owned by a member of the Guinness clan that made its fortune in pints. In the gift shop, a woman wearing what could be a hand-loomed suit records purchases in a linen-covered and leather-cornered ledger. Nearby, the homes, though new enough to be equipped with central heat, burn peat for warmth. Gaelic and Gaeltacht are spoken here, falconry is preferred over Frisbee, and poteen—or green lightning, Ireland’s barley moonshine—is readily and openly available, even though it has been outlawed since the 1600s. On the N60 leaving Ballymoe, semis share four lanes with ponies and traps.

None of these references is intended to mock or disparage the region. The hope is that Galway and Mayo never budge from their past, for in yesteryear there was more softness and much handshake trust. The counties’ tranquillity is an asylum from a harder, darker present. Today’s rural Ireland shows the spiritual benefits and social treasures that we have sacrificed in our impatience to get ahead. Perhaps this is why Bentley Motors chose Ashford Castle, Galway, and Mayo for the launch of the 2007 Bentley Azure convertible, an example of elegance and styles past.

Today’s luxury cars are lighter, smaller, and less expensive. In contrast, the Azure weighs one bag of groceries short of three tons. At nearly 18 feet, it is longer than many motor homes. At a base price of about $330,000, it costs more than most tract homes. And with a city miles-per-gallon rating of 9.2, this car should have its fuel consumption measured in terms of gallons per mile.

In short, the Azure suggests a dinosaur: a ponderous, hugely expensive, and irrelevant museum piece with a shape older than Stonehenge. It needs two superchargers and a 450 hp V-8 to move all that lard. It appears outdated for its era, seems to motor in total defiance of automotive progress, and stands, or rather lumbers, as a relic of those days when cars went through production cycles of 15 years before the manufacturer would add so much as a new headlight rim.

On the other hand, where is it written that old-fashioned cannot mean best-fashioned? A Swatch tells the same time as a Patek Philippe, but which would you rather wear to a Buckingham Palace garden party? And if searching for a gentler life, would you prefer a drywall castle in suburban Scottsdale or a cottage in Connemara?

With the company’s Mulliner Division perpetually poised to customize Bentleys, an Azure can be made even more exclusive. One buyer has imagined her Azure painted to match her lipstick. Another would like gem inlays for the Flying B hood ornament. Then there is the man who has ordered an interior finished with oak woods cut from his own estate—even though the lumber requires 18 months to season. Armor is available for those who consider a Bentley full of holes to be the ultimate blasphemy. Such additions could raise the Azure’s price to as high as $500,000.Call it owner attitude more than ambition. See it as a desire for thorough quality, painstaking design, and the highest of values. Consider possession of a Bentley to represent a life stage that, once attained, should be rewarded by a fast, exclusive, beautiful car.

The Azure’s venerable design is durable because it is an original, not a modern exercise in retroactivity. Corners and edges are softened to augment the styling, not the aerodynamics. The car is more than 6 feet across because it is 18 feet long and nearly 5 feet tall; those are perfect big-car proportions. They are consistent with a visual science the Brits patented with Daimler, Lagonda, and any Rolls-Royce.

The Azure offers no tricks and no trinkets, because more is less if it does not enhance a perfect design, which in this case is a large, open wedge intended to carry many people in complete comfort over great distances. The front end is similar to that of the contemporary Arnage, with four perfectly sized and precisely spaced headlights and no aerodynamic lips or ledges to mar the cleanliness of its look. Even the Azure’s 19-inch wheels appear to be completely at peace in their wells.

The convertible top has three layers and seven bows because, when raised, it must present a smooth roofline without wrinkles or any suggestion of a cheap toupee. When the lid is lowered, it disappears—without any jerks and in about 30 seconds—into the trunk, beneath a hard tonneau.

The Azure’s interior features woods chosen for their mirror-matched grain and leather unblemished by warts or barbed-wire scars from donor cattle. Touches of antiquity remain in the air-conditioning and heater controls, which are portholes with manual, push-pull levers. The parchment-faced instruments are a standard at the Pebble Beach Concours d’Elegance. The Azure also has a simple cigarette lighter, which on cars by other companies would be identified as an auxiliary power source.

The engine is one of the oldest V-8s still in use. Until this year, when Bentley switched to a 6-speed, the Azure and Arnage both were sending power to their rear wheels through a 4-speed automatic that was a hand-me-down from GM. Once again, however, do not view this observance of tradition as a denial of technology. That 6.75-liter engine is good for 645 ft lbs of tug, many more pounds of pull than any Hummer or Range Rover. It is a tribute to Bentley’s employment of modern turbocharging, engine management, and electrohydraulic suspension. The Azure also incorporates carbon-fiber cruciforms, which reduce its weight and stiffen its chassis, and the new, seamless 6-speed transmission courtesy of parent company Volkswagen and its Phaeton.

But is there a place for elderly elegance and 1930s style today? “People don’t need this car,” says Bentley chairman and CEO Franz-Josef Paefgen. “But we always try to follow the market, and there will always be a market for these exclusive, traditional cars that will never be big volume, and must never be the important focus of the company.”Paefgen, the visionary who rescued Bentley when the then-80-year-old British car builder was falling off the stretcher, believes the Azure does not like to be shaken by high-performance driving—just stirred. “But if you do let it go,” he says, “it will give you this feeling of being in a protected environment.”

Push it we did, albeit cautiously, on the back roads of northwestern Ireland, avoiding tractors and clipping shoulders ripe with mush and marble-filled potholes. The Azure handled surprisingly well and felt remarkably small on roads that really were too narrow for a car of this width and weight. When we pressed too hard on the brakes for a tractor, or fell too deep into a pothole, the weight transfer was palpable. But electronic traction controls quickly launched themselves from their low thresholds, so all that bulk never became a dangerous burden. Even with the sport/comfort dampers on their cushiest setting, body roll and suspension float conveyed only a notion of motion

The ride is softer than a cat in cashmere. The car actually resists rush, tending to transform wild drivers into sedate motorists. Only once did we take a shillelagh to this light locomotive, stomping the Bentley to pass a car that had overtaken us. We sailed past all traffic with a velvet surge, a muffled but mighty roar, a noticeable absence of pitch or squat, and complete ease, until more congestion and villages ended the romp.