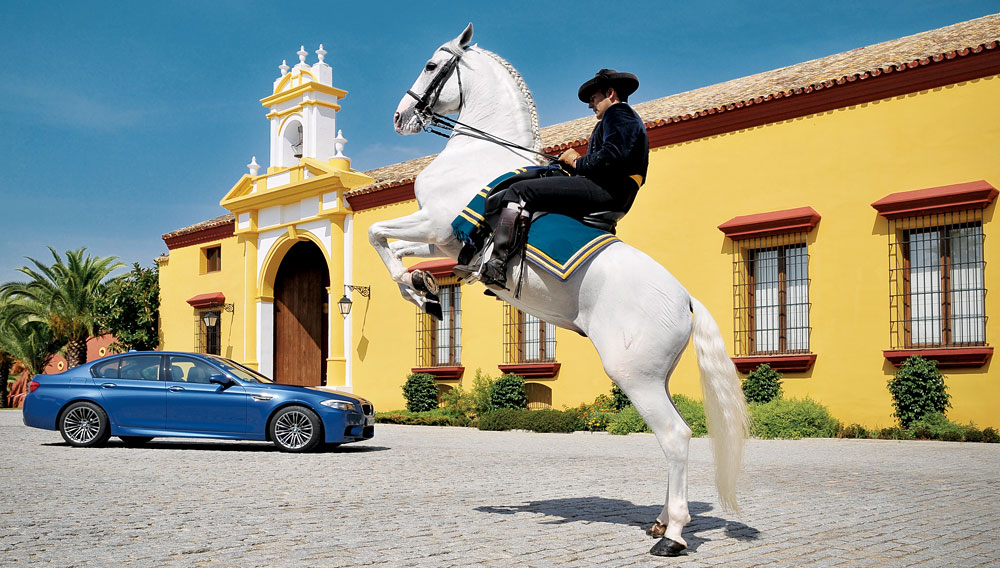 Building a better sports sedan is seldom if ever a simple task. It involves striking a delicate and often elusive balance between real-world requirements (passenger comfort, cruising range, cargo capacity) and gut-punching performance. But even when on paper the matrix appears to be synchronized, sometimes the formula does not translate to the road quite right.

Consider BMW’s M5, the high-performance sedan built on the 5 Series platform. The last iteration, which was in production from 2005 until 2010, was a screaming, snarling track toy powered by a V-10 that charged relentlessly until it reached its rev limiter at an astronomical 8,250 rpm. Though it was popular enough to outsell each of the three previous versions of the M5, the car did have at least a couple of flaws. Its automated manual transmission was notoriously herky-jerky, and its variable-ratio steering provided drivers minimal feedback and feel.

The likelihood of BMW’s building a fifth-generation M5 that was better than the fourth seemed remote, given both the dimensions of the new sedan upon which it would be based and the company’s intent to build a sports sedan that would be more fuel efficient and gentler on the environment.

The new standard-issue 5 Series, introduced last year, is longer, wider, and heavier than the previous edition, and it has a new electric-steering setup that favors fuel economy over feel. The M division engineers addressed the weight issue by removing two massive bushings from the car and attaching the M5’s rear axle directly to the chassis. In addition to shedding weight, this adjustment allows the driver to feel more directly connected to the road. The M5’s wider track, lighter wheels and brakes, and revised camber and caster settings enhance that sensation. Incorporating aluminum and high-tensile-strength steel into the M5’s body and chassis removed a few more pounds. To further improve feedback for the driver, engineers altered all of the M5’s mechanical links between the steering wheel and the road, and they replaced the 5 Series’ electronic steering assist with a hydraulic system.

Although the previous M5’s V-10 offered a racecar-like willingness to rev, BMW looks to improve fuel efficiency and reduce emissions with every new model. Thus the new M5, which will go on sale in late spring or early summer for an estimated price of $90,000, is the first M car powered by a turbocharged engine. The new mill is a 4.4-liter V-8 with twin-scroll turbos nestled between the cylinder banks. A revised version of the engine found in the X6 and X5 M, it produces 560 hp and 500 ft lbs of torque. Compared to the old V-10’s ratings, those figures represent a 10 percent gain in power and a 30 percent increase in twist.

The new engine is also 30 percent more fuel efficient than the V-10, and it emits 25 percent less carbon dioxide, according to BMW. The improved gas mileage (22 highway mpg) and larger fuel tank (21 gallons) enable the new M5 to travel roughly 50 percent farther than its predecessor before requiring a refill—an attribute, one BMW exec says, that should make weekend jaunts to the Nürburgring less taxing for German M5 owners.

Because BMW’s 8-speed transmission would not be able to cope with the M5 engine’s considerable torque output, the company adapted the M3’s 7-speed dual-clutch gearbox and mated it to an active rear differential, which, when used in conjunction with the launch-control feature, helps slingshot the M5 from zero to 62 mph in 4.4 seconds, according to BMW. The actual acceleration is likely quicker than the company’s conservative estimate.

During a two-day romp through Spain’s Andalusia region, on the roads south of Seville against a backdrop of desert, palm trees, and Moorish architecture, the M5 displayed just how much better it has become.

The test car’s cabin looked like a function-focused space; it offered only a few nods to luxury. An Alcan­tara headliner and Merino leather seats helped to offset the austerity of the aluminum trim, and the dashboard’s topstitched leather surface also added a touch of warmth. But overall, the interior design theme veered more toward clinical detachment than buttery opulence—though this is not unusual for a BMW.

When the throttle was mashed, the M5 clawed into the pavement and lurched forward, pressing passengers deep into their seats as the transmission seamlessly sent power toward the rear wheels. The steering, suspension, and throttle response each offer a choice of three settings: Comfort, Sport, and Sport Plus. At high speed, the car performed most smoothly when all three were set in Sport mode. A choice of five transmission modes is available, and in the high-performance settings the engine seemingly generated enough torque to snap the rear tires loose. But the engine’s computer can intervene when necessary so that the driver appears less like a pinhead and more like a professional.

The drive included an opportunity to test the M5’s capabilities with some closed-course antics at the Ascari Race Resort just outside the medieval town of Ronda, near the Costa del Sol. Ascari’s 3.37-mile, 26-turn track challenged the M5’s suspension far more than the region’s well-maintained secondary roads did during the ride to the resort.

The bane of any sedan striving for sports-car performance is heft. The interior volume and extended wheelbase associated with comfortable passenger accommodations and sufficient cargo space can hinder a car’s ability to change direction quickly. However, the M5, despite its relatively large footprint, turns easily, in part because the drivetrain sits nearly an inch lower on the sports sedan than on the 5 Series, creating a lower center of gravity. The active rear differential also assists steering by transferring as much as 100 percent of the engine’s torque to either rear wheel. Steering the old-fashioned way—that is, with the right pedal—is also possible if you do not mind vaporizing pricey Michelins. The stability-control system allows such shenanigans until it nudges the vehicle back on course with nearly imperceptible corrections. In its most aggressive mode, the transmission shifts with jarring insistence; a more moderate setting sacrifices a bit of speed in favor of smoothness, which was welcomed during midcorner cog swaps on the Ascari circuit.

The M5’s six-piston brakes and massive cross-drilled rotors reduced speed as requested, though the pedal feel sometimes belied the work they were doing. Despite some initial doubts about their ability to slow the two-ton sedan enough to negotiate Ascari’s turns, the brakes never disappointed.

The drive north from the resort back toward Seville presented a chance to test the car’s launch-control function. To activate this maximum-acceleration mode, you turn off the traction control, click the shift lever forward while holding the brake, and floor the accelerator to maintain revs at 3,000 rpm—well above the 1,500 rpm mark where the torque plateaus. The words “Launch Control Active!” (exclamation point included) appear on the dashboard between the speedometer and tachometer, along with a checkered-flag symbol. When you release the brake pedal, the clutch dumps violently and shoots the vehicle forward, leaving two long patches of rubber behind on the pavement.

For most of the rest of the ride, with the car in seventh gear and traveling at 60 mph (as noted by the heads-up display), the revs held at a mellow 1,500 rpm. As the sun dropped behind the desert landscape, filling the sky with deepening hues of gold and purple, the M5’s suspension adapted to changing speeds and g forces, comfortably softening the ride. The engine’s computer interpreted load, gearing, and throttle input, translating those variables into an algorithm that piped in a gentle soundtrack of intake whine, exhaust resonance, engine burble, and waste-gate chatter. The noise was comforting. It allayed any concerns about the turbocharged mill being too quiet for an M car.