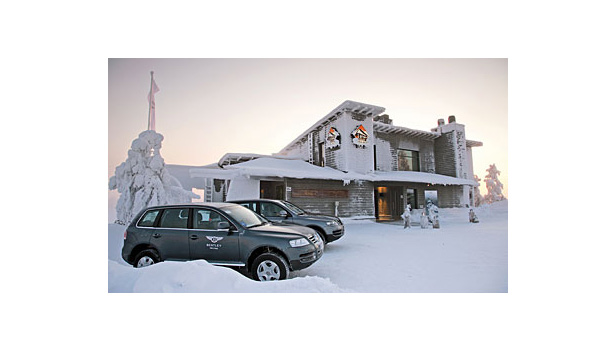 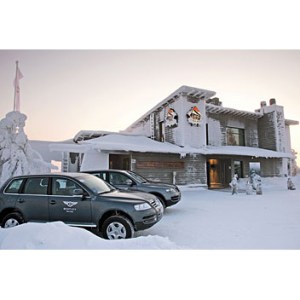 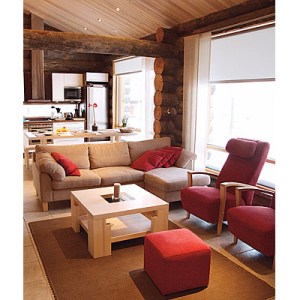 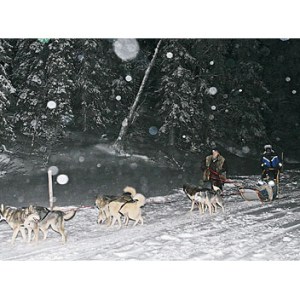 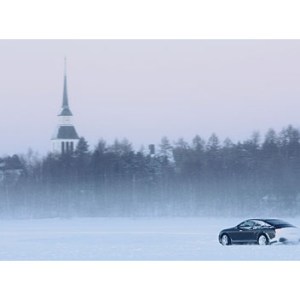 ‘‘Now throttle! Fool! Fool! Fool!” Driving instructor Thierry Bouillon erupts as I slide a Bentley Continental GT sideways around an icy hairpin turn. Until this moment, I had been quite pleased with my display of car control, so the insult catches me a bit off guard, and I hesitate for a moment before I glance over and realize that Bouillon is not calling me a fool; the boisterous Belgian is just requesting full throttle.

But in the split second it takes to decipher an accent, a lot can happen to the balance of a speeding car that tips the scales at 6,000 pounds—especially when that car is traveling across ice. As the big Bentley slows, its front end settles enough for the studded Nokian tires to regain their limited traction, and a tardy throttle application turns a controlled power slide to the right into a suddenly less controlled snap to the left.

Headquartered at Chalet Ruka Peak, a fleet of Volkswagen SUVs shuttled the Power on Ice participants to private cottages.

Soon the car is fishtailing willy-nilly across the width of the track, and I am wrestling with the steering wheel when I should be worrying about the next corner, which is rapidly approaching. Full throttle, indeed. We already are moving too fast, if my depth perception on this white track with a powdery white background is even close to being accurate.

Disobeying my instincts, I stomp on the accelerator, and the GT recovers, if only briefly. The problem is, though, now we need to turn again. I hesitate momentarily while grasping the steering wheel—my knuckles as white as the landscape—and my feet once again respond a second too slowly. The car spins wide and off the track and into a surprisingly deep blanket of snow, softly but surely bringing the thrill ride to an end. Bouillon’s enthusiasm evaporates, and he looks at me with either faint amusement or bemused disgust: “OK, it’s over,” he says. “Can I have the walkie-talkie, please?”

According to the GPS indicator arrow on the navigation screen, we are in the middle of northern Finland’s Kuusamojarvi, or Lake Kuusamo, which lies approximately 500 miles north of Helsinki, 30 miles south of the Arctic Circle, and—during at least part of the winter—beneath about two feet of ice.

After Bouillon uses the walkie-talkie to call for a tractor to tug us out of our predicament, he steps out onto the ice to assess the damage. Then he takes a shovel from the trunk and begins digging packed snow from the wheel wells and from under the bumpers. My ego is bruised but not beaten, because I am not the only driver to misjudge a turn. A quick survey of our surroundings reveals several other temporarily disabled—yet also undamaged—Bentleys.

Lake Kuusamo is more forgiving than any racetrack, which is why the Juha Kankkunen Driving Academy sets up shop here every winter. Kankkunen, a four-time World Rally champion, uses Volkswagens in most of his programs, but he has partnered with Bentley before. Earlier this year, he set the world speed record for ice driving by reaching 199.86 mph, on the Baltic Sea in a Continental GT.

“I started driving at the age of 7 on my father’s lap,” says the 48-year-old Kankkunen, whose father also drove competitively. “By the time I was 10, I could reach the pedals, and by 14, I could even beat him. But I learned how to drive on the ice.”

After the tractor has liberated my Bentley from the snowbank and I have returned to pit lane—a temporary base station composed of tepee shelters—Kankkunen agrees to take me out on the lake and demonstrate the finer points of ice driving.

My epiphany occurs even before Kankkunen reaches the road course. He navigates the cone slalom at 80 mph, effortlessly sliding the car back and forth between the orange markers, never pointing it straight ahead, but instead allowing it to slide forward sideways, so that the car’s momentum can carry the car in the intended direction. By the time Kankkunen moves on to the figure-eight exercise, an idiotic grin spreads across my face: Ah, so that is how you do it.

During the coldest part of winter, Lake Kuusamo is covered by nearly two feet of ice—a thickness sufficient to support a three-ton Bentley.

When driving on ice, the position of the steering wheel is not nearly as important as the angle of the gas pedal. The rotation of the tires—more than the tires’ direction—will determine the path a vehicle takes on a slippery surface. Take a hard left turn on an icy road without using the throttle, and you are likely to plow into a snowbank on your right—if you are lucky enough to find one.

When Kankkunen takes corners, he barely moves the steering wheel. Instead, he lets the throttle transfer the car’s momentum from front to rear and then from one side to the other. The car’s motion evokes the hippo ballet from the film Fantasia. “Being smooth,” says Kankkunen, “is more important than being fast.”

Although Bentley has been conducting driving programs since as early as 1938, it used to be that most owners had little interest in learning how to drive on ice or in any other conditions. Those were the concerns of their chauffeurs. But now Bentley has the Continental GT and the Continental Flying Spur—serious drivers’ cars. “We have offered chauffeur driving schools through Mulliner for many years,” says Bentley spokesman David P. Reuter, “but ever since the introduction of the GT in 2002, Bentley owners have been requesting their own driving experiences.”

Thus the company offers a variety of Bentley Driving experiences in the United States and Europe, including Power on Ice, the ice-driving program that was held on Lake Kuusamo this past February and in Sweden the previous year. Bentley has yet to finalize its plans for the coming winter.

Ice driving demands cold weather, and when we landed at Kuusamo, the city in northern Finland that bears the same name as the lake, the temperature readout in the Volkswagen Touareg registered minus 23 degrees Celsius. The VW corporate shuttles delivered the other guests and me to Chalet Ruka Peak, a winter wonderland of majestic pine trees drooping with snow. The €7,200 price (about $9,700) of the program included two days of driving instruction in automobiles provided by Bentley, and a two-night stay in a private cottage with a sauna, kitchen, wood-burning fireplace, satellite TVs, and several bedrooms.

The cost also included a night of snowmobiling, a night of husky dogsledding, and several meals that featured such Finnish dishes as reindeer stew, salmon and reindeer soup, elk, venison, and still more reindeer. You even could have visited a reindeer farm if you did not mind meeting your meal.

On the second night in Kuusamo, a shaman speaking an ancient language blew smoke in our faces, rubbed ashes beneath our eyes, and toasted us with a concoction that was described as reindeer milk but which tasted similar to Baileys Irish Cream. Apparently the incantation was a prayer that each of us come back in the next life as a reindeer—a fate that, considering my last few meals, I would rather avoid.

Then again, a reindeer might end up on a Finn’s dinner plate, but it never has to suffer the indignity of lodging a Continental GT in yet another snowbank, as I do on the second day of driving. The tractor eventually makes its way to Bouillon and me after freeing another stranded Bentley. As the vehicle approaches, the ice creaks and tiny fault lines form a giant checkerboard beneath our feet. “They say that’s normal,” Bouillon offers, but the look on his face belies his assurance. We are both happy to get back in the car and speed away.

This time, I prepare for the hairpin corner with a technique Bouillon calls the Scandinavian Flick, or pendulum turn. Rally drivers frequently use the maneuver to shortcut hairpin corners. It involves first intentionally upsetting the balance of the car—sending it into a skid—and then oversteering around a corner and accelerating out. In theory, it is a wonderful idea. In practice, however, it requires, well, practice.

“OK…Now! Throttle, throttle, throttle!” Bouillon shouts, the volume of his voice rising with every word. For emphasis, he karate chops the air with his right hand, displaying what appears to be a well-practiced imitation of fellow Belgian Jean-Claude Van Damme. Meanwhile, with his left hand, Bouillon pulls back on the shift lever, dropping the manually operated 6-speed transmission into second gear. I mash the accelerator more immediately this time. The car responds by creating a dazzling rooster tail of snow as it drifts wide in a giant semicircle. The turn isn’t fast, but it is smooth.