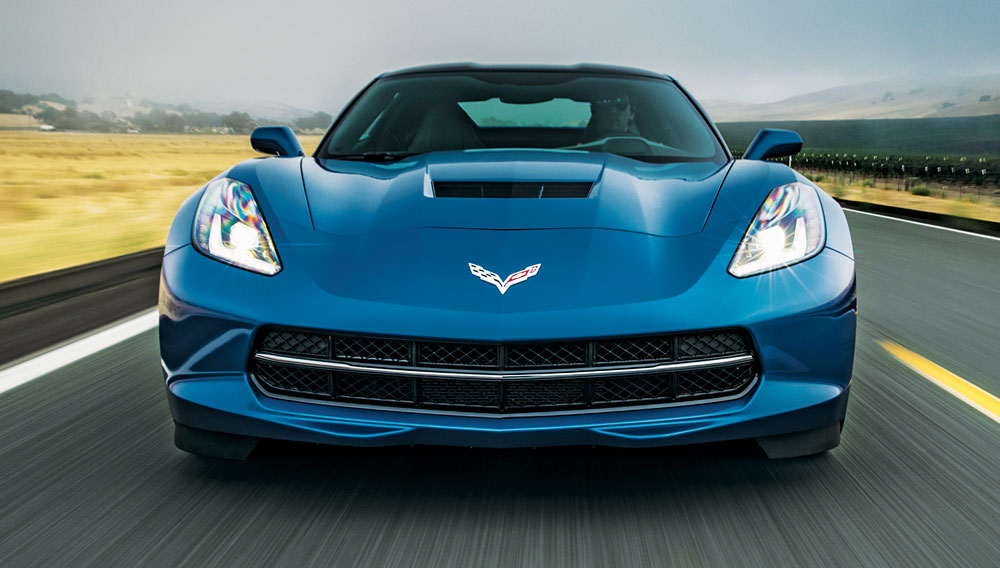 The look of the sixth-generation Chevrolet Corvette, better known as the C6, may not have grown old, but the people buying the car did. One study placed the average age of a Corvette owner at 59, nearly as old as the car model itself, which has been in production since 1953. Another found that nearly half of the people who bought new Corvettes in 2012 were 55 or older. The aging audience helps stigmatize the Corvette as a midlife-crisis car, but more significantly, it jeopardizes future sales, because before long older drivers will—euphemistically speaking—exit the sports-car market.

Chevrolet officials determined that if the Corvette production run is going to continue through a seventh decade and beyond, it has to attract more young buyers. Thus for the 2014 model year, the car remains a high-performance machine with a relatively low price, but it has added a much-improved and more plush interior and new, edgier exterior styling.

Yet the new Corvette has an old name, one that will stir the memories of baby-boom buyers. This seventh-generation model has been nicknamed the C7, but Chevrolet calls it the Stingray. The Stingray moniker first appeared (as Sting Ray) on the second-generation Corvette in 1963. Chevrolet retired the name, which had become the one-word Stingray, in 1976. This is around the time members of the new Stingray’s target audience were born.

While the C6 had gently sculpted fenders, the new car has a more aggressive look, with crisp character lines, and functional scoops fore and aft. The most noticeable change involves the taillights. Instead of the signature round lamps of previous versions of the car, the Stingray has rectangular ones similar to those on the current Camaro. According to Tom Peters, who headed the teams that designed the C6 and the Stingray, the round design just did not work with the angular look of the new car.

The Stingray’s exterior may be new, but the car still looks like a Corvette. The interior, on the other hand, bears little resemblance to the cabins of previous generations. Most notably, it features optional leather-covered surfaces, and instead of the old buckets that were as reassuring as a weak handshake, it has new seats that are strongly bolstered. They hold the driver in place and provide a commanding view of the road.

The Stingray has a base price of just under $52,000. The Z51 handling package adds $2,800 to the cost. Other options, such as magnetic ride control, sports seats with even more bolstering, a clear-finish carbon-fiber roof panel, and the leather trim for the interior can raise the car’s price to more than $70,000, which would still leave the Stingray with an impressive performance-to-price ratio.

The car’s 6.2-liter pushrod V-8 produces 455 hp and 460 ft lbs of torque (460 hp and 465 ft lbs of torque with an optional exhaust system).The new LT1 engine includes Active Fuel Management to enhance its fuel efficiency. The system enables the engine to operate in 4-cylinder mode in situations where eight cylinders are not necessary, such as highway cruising. (The Stingray can run on four cylinders at speeds as fast as 100 mph, allowing drivers to be environmentally responsible while flouting traffic laws.) The AFM system contributes to the car’s EPA ratings of 17 mpg on city streets and 29 mpg on highways.

The Stingray is available with a choice of two transmissions: the optional 6-speed torque-converter automatic (with steering wheel–mounted paddle shifts) and the standard 7-speed manual gearbox. The latter also includes paddle shifters, which engage a novel rev-matching system that automatically blips the throttle on downshifts. Equipped with either transmission, the Stringray accelerates from zero to 60 mph in 3.8 seconds and covers the quarter mile in 12 seconds at an average speed of 119 mph.

The Stingray’s new technology is as impressive as its quickness. The throttle, traction control, suspension stiffness, steering response, and optional electronic limited-slip differential (part of the Z51 package) are controlled with a console-mounted knob that can be set to five different modes. They range from Weather, which starts the automatic transmission in second gear, to Track. In between are Eco, which controls the aggressiveness of the AFM; Tour, which offers a suppler ride; and Sport, which adds heft to the steering and stiffens the dampers. Track mode adds even more weight to the steering and more stiffness to the dampers, and depending on the setting within the mode, minimizes the intervention of the stability- and traction-control systems.

The instrument-panel display, which includes an 8-inch LCD that shows as many as 69 programmable information points, changes depending on the driving mode. In the Tour, Weather, and Eco modes, the center screen shows fuel-economy, navigation, or entertainment options and is flanked by a speedometer on the left and fuel and temperature gauges on the right. In Sport mode, a traditional analog tachometer dominates the center screen. For Track mode, the screen presents the tachometer in a shape similar to a hockey stick, just as the C6.R racecar’s tachometer display does. Drivers can also configure the screen to show acceleration and lap times.

During a test-drive in August, on the roads of California’s Monterey Peninsula during the annual Monterey Car Week, the base Stingray (without the Z51 package), equipped with the automatic transmission, proved compliant when set in Tour mode. It offered enough tautness to ensure quick turn-ins and stable road manners on potholed surfaces. Twisting the control knob to Sport sharpened the car’s reflexes and opened a bypass in the exhaust system. The exhaust note became louder and seemed to rip between gear changes, delivering an exhilarating sound during flat-out acceleration runs.

The base Stingray’s new wheels (18 inches for the front and 19 inches for the rear) are 2 inches narrower than those on the C6. They are designed to offer less rolling resistance and provide better aerodynamics, which contribute to better fuel economy. The narrower wheels do not affect the car’s stability. The Stingray feels settled, even at high speeds.

The hood vent, while extracting air coming into the engine, does an excellent job combatting lift. The rear fender openings channel air down to the rear end, cooling the differential and transmission. The air exits through a diffuser, which helps keep the back end planted. The stock Stingray has a small Gurney flap in the center of the tail, while the Z51 package sports a full-length spoiler across the back of the car.

For test-drives in a Z51 Stingray equipped with the 7-speed manual transmission, the car’s handlers set up a course at the Marina Municipal Airport. The drive to the airport presented an opportunity to sample the automatic rev-matching system. A pull on the wheel-mounted paddle engaged the system and delivered perfectly timed accelerator blips on downshifts. It eliminated the need for the heel-and-toe dance on the brake and gas pedals.

The airport course was a relatively low-speed, second-gear configuration marked by pylons. Track mode, which limits intervention from the stability-control system, provided plenty of thrills by allowing the car to be easily drifted around the cones. Even when the rear end stepped out, the car’s behavior remained predictable. The electric power steering proved quick and accurate, and the 7-speed manual delivered crisp gear changes. The Brembo brakes were solid and responded immediately to pressure on the pedal.

The Z51’s performance is comparable to that of the 2013 Z06—the 505 hp version of the C6—and improvements to the cabin, the technical advances in the stability control, and the engine upgrades lift the base Stingray well above last year’s Grand Sport, which was a tier above the base C6. So the Corvette has a new look, and it has been improved. Maybe it will get younger owners, but alas, the older owners are not getting any younger.