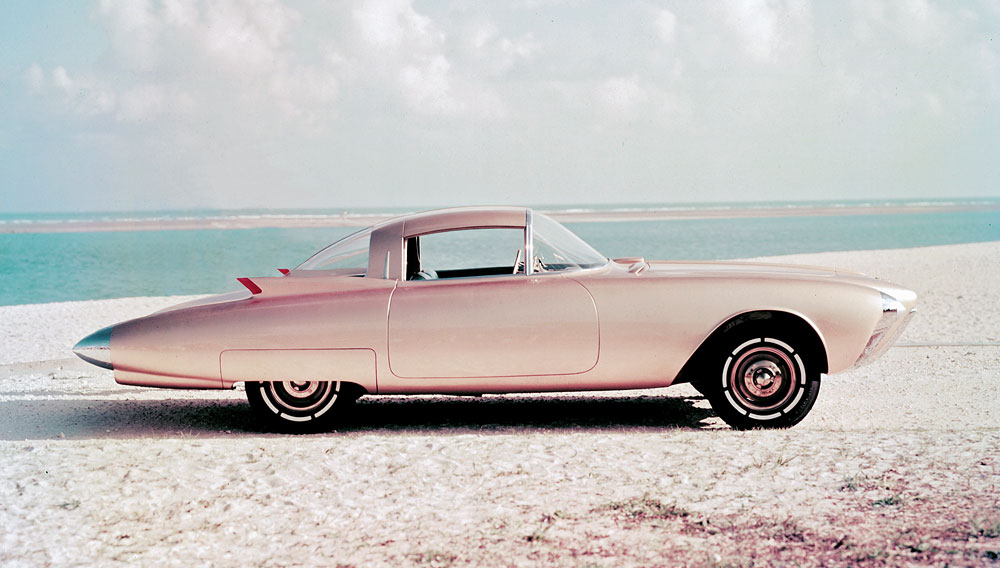 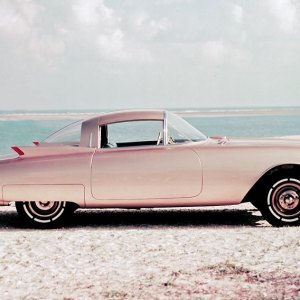 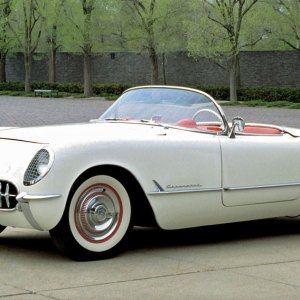 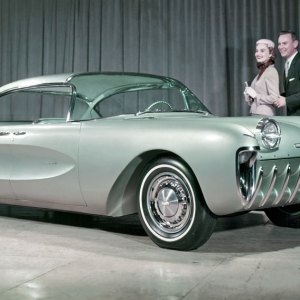 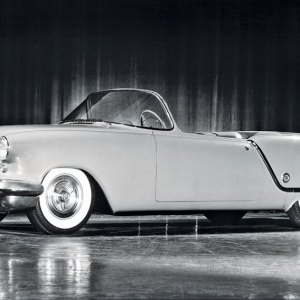 From the late 1940s to the mid 1960s, U.S. automakers built and displayed cars that represented their visions of future designs. The most outrageous were impractical and essentially unbuildable as production vehicles. But that did not matter. Whether they were intended to be powered by gas turbine engines or even atomic energy, had clear bubbles covering the passenger compartments instead of steel panels, or were equipped with control sticks in place of steering wheels, these models that we now call concept cars seemed possible during that period of postwar optimism.

Perhaps the most memorable models came from General Motors, which at the time was flush with cash and with creative talent led by design chief Harley Earl. January marks the 60th anniversary of the debut of Earl’s EX-122 concept, better known as the Chevrolet Corvette. The unveiling took place at the Waldorf-Astoria hotel in Manhattan during the GM Motorama, a showcase for then-current models and for concepts such as the Corvette.

The Motorama, which was held annually (except for a brief gap) in conjunction with the New York Auto Show, appears to have been an outgrowth of the company’s exhibitions at the world’s fairs in Chicago in 1933 and New York in 1939. It also may have evolved from the Industrialists Luncheons that GM CEO Alfred Sloan hosted each January at the Waldorf-Astoria during the Depression years. Sloan would invite the city’s top banking, finance, and industrial executives to the hotel, where they could view the GM production models that were on display while he and Earl gauged their responses to the cars.

GM first opened its Waldorf-Astoria show to the public in 1949 and called it the Transportation Unlimited Autorama. A year later, the company borrowed half of the name of its exhibit at the Chicago Museum of Science and Industry and renamed the show the Mid-Century Motorama.

After a two-year hiatus, GM revived the event for 1953 and shortened its moniker to the Motorama. But the show had more than just a new name; it had a new format and a purpose other than promoting GM’s current offerings. It was now a $5 million traveling exhibit that over a six-month period moved from the Waldorf-Astoria to Miami, Los Angeles, San Francisco, Chicago, and Boston, drawing some 1.5 million visitors along the way. While the 1953 Motorama included the shiniest examples of GM models that were or soon would be available at dealerships, its main attractions were the Corvette and seven other concept cars, or what Earl called dream cars.

The Corvette proved to be such a sensation—and sufficiently viable as a road-going vehicle—that GM moved it into production within six months of its Motorama debut. The Buick Wildcat I, Cadillac Le Mans, Oldsmobile Star­fire, and other dream cars from the 1953 show, on the other hand, were just flights of fancy from designers who were not fettered by concerns with production feasibility. Nevertheless, some of these cars did contribute styling details—as well as their names—to future production models.

The 1954 Motorama cars were even more flamboyant than those from 1953. They included the Buick Wildcat II, a rakish sports convertible with a 100-inch wheelbase and wired wheels, and the Pontiac Bonneville Special, a two-seat, finned, clear-canopied speedster with a modified version of Pontiac’s top engine of the day—the Silver Streak inline 8—under its fiberglass hood. Also on display was the single-seat, turbine-powered Pontiac Firebird, which, with its pointed nose and central tail fin, looked more like a jet fighter than a car.

Most of the Motorama cars lacked avant-garde technology. The La Salle II roadster and sedan that GM displayed in 1955 were exceptions. These cars had independent rear suspensions, flexible drive shafts, and aluminum small-block V-6 engines with fuel injection. However, the engines were inoperable—they were mock-ups with no pistons. But no one really cared: These cars were for display, not for driving.

GM ran its final Motorama in 1961, by which time television advertising had become a more cost-effective means of promoting its brands and its new models. The company also may have been concerned that, through the shows, it was revealing too much information about its experimental designs to Ford, Chrysler, and other competitors.

When the Motorama run ended, few people outside of the GM executive offices knew what had become of the dream cars. Common assumptions were that they had been hidden away in warehouses, dismantled to provide parts for later show cars and experimental vehicles, or simply destroyed. Indeed, GM had sent many of its dream cars to the crusher because they were tax and safety liabilities. The company did not want them on the books as taxable corporate assets, and it wanted to avoid liability issues with cars that were not engineered for the road.

Car collector Joe Bortz, a 70-year-old retired restaurateur from Highland Park, Ill., had been fascinated with dream cars since at least 1954, when at age 12 he attended the Motorama during its Chicago stop. In the late 1970s, when Bortz was building a collection of Ferraris, a friend told him that the Detroit Historical Society was selling the Pontiac Bonneville Special from the 1954 Motorama.

Bortz sold off his Ferraris, bought the Bonneville Special, and continued tracking down and acquiring other Motorama cars. He now has two dozen of them. The Bonneville Special was unrestored when he bought it and remains so. “The air in the tires is 90 percent original,” he says.

Bortz declines to discuss the value of his Motorama cars, but the Bonneville Special is one of only two that GM made. The other one also has survived, and after a full restoration, it sold at auction in 2006 for $3.02 million. That price notwithstanding, Craig Jackson, chairman and CEO of the auto-auction company Barrett-Jackson, believes the Motorama cars should be coveted more than they are. “These cars are America’s masterpieces,” he says. “Why do we not value them? Concept cars such as these are underappreciated. Why don’t we appreciate the work that an artist like Harley Earl did?”

Bortz certainly appreciates Earl’s work. By 1988 he had acquired six Motorama cars. His search for more led him to the Warhoops wrecking yard in Sterling Heights, Mich., not far from the GM design center. He had heard that one of the Motorama cars brought there to be destroyed had survived. After Bortz viewed the battered, broken hulk, Warhoops owner Harry Warholak quoted him a price that seemed outrageous. “I didn’t realize he was offering me four cars, not just one,” Bortz says.

All four were from the 1955 Moto­rama: the Eldorado Brougham Town Car, the Chevrolet Biscayne, and the Cadillac La Salle II roadster and sedan with the advanced mechanicals. He hauled them back to his shop and began the process of reconstructing them, acting, as he says, like an “automotive archaeologist.”

The Eldorado was relatively intact, but the other three were disasters. Piecing the three bodies back together was easier because they were made of fiberglass, but the Michigan climate had ruined many of the irreplaceable metal parts. Bortz also encountered issues with features that were just mocked up for display and had never actually operated.

After investing substantial sums of money and years of labor into the machines, Bortz had the Chevrolet Biscayne and the Cadillac La Salle II roadster restored well enough to appear at the Pebble Beach Concours d’Elegance in 2008 as part of the celebration of GM’s 100th anniversary. He is still working on the La Salle II sedan. The workers who took on the various restoration tasks were aided by GM, which provided drawings, blueprints, and period photos. Bortz was not surprised by GM’s assistance, even though the company had, decades earlier, sent the cars to a wrecking yard to be destroyed. “I was saving important parts of their history at no cost to them,” he says.

Bortz, who frequently lends cars from his collection to museums—three are currently on display at the National Corvette Museum in Bowling Green, Ky.—continues to search for the Motorama cars that have eluded him. He freely gives out his phone number in the hope that the next call he receives will lead him to another dream car. “GM was keeping poor records at the time,” he says. “So who knows what happened [to other Motorama cars]?”

As for the Motorama Corvette—the dream car that prompted a production run now 60 years long and counting—it has survived. After its Motorama appearances, the Corvette was returned to GM’s engineering division, which installed a V-8 engine and ran endurance and performance tests with the car. In 1956, when the Corvette’s days as a test mule came to an end, the engineer in charge of GM’s experimental department purchased the car. It is now with its third owner.