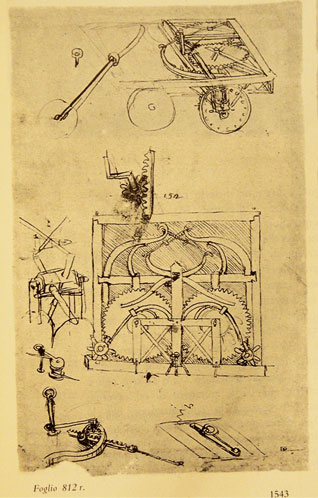 In 1478, at the age of 26, Leonardo da Vinci drafted illustrations of a curious and ingenious machine that would puzzle scholars, engineers, and designers for the next 500 years. The sketches of the invention—sometimes dubbed the “Leo-mobile” or the “da Vinci car”—appear in the Codex Atlanticus, a compilation of his documents and drawings. They depict a cart, with gears and springs, that reflects da Vinci’s fascination with engineering and mechanics. How this vehicle could achieve motion under its own power, however, remained a tantalizing mystery that went unsolved until April 2004, when a model of the cart was unveiled at the Institute and Museum of the History of Science in Florence, Italy.

The right-hand page of leaf 812 of the Codex Atlanticus contains an illustration of a machine (the CA812r), viewed from the top, equipped with gears, leaf springs, and working arms enclosed in a square frame. Six smaller diagrams encircling the main drawing reveal that the machine also has wheels and sets of toothed gears designed to turn those wheels. Another side-view sketch shows a steering arm mechanism positioned at the back of the cart. Nothing on the page indicates that da Vinci intended the cart to move in any way other than under its own power.

The debate concerning the inventor’s intentions for CA812r intensified in 1905, when da Vinci scholar Girolamo Calvi dubbed it “Leonardo’s Fiat,” in reference to the automobile company that had been founded six years earlier. Romano Nanni, director of the Museo Leonardiano di Vinci, which displays several models of the CA812r, calls it a carro automàtico da feste, or a self-propelled pageant wagon. Other experts agree that da Vinci likely designed it to be a carriage for conveying scenery elements in royal pageants, not as a means of transportation. The sketches show no passenger seating, and the machine measures just 22.4 inches long, 19.7 inches wide, and 13.2 inches high—a tight squeeze even by Fiat standards.The scholars and designers who studied da Vinci’s sketches to try to understand how the CA812r would operate assumed that the leaf springs were the key to forward motion. But no one was able to construct a working model without drastically modifying da Vinci’s concept.

At the Museo Leonardiano di Vinci, located in the town of Vinci just west of Florence, an example of one of the most famous attempts at building the CA812r is on exhibit. Completed in 1953 with funding from IBM, this version correctly interprets the three-wheel configuration (two wheels in the front and one in the back) and has a rear steering wheel and several cables, presumably to aid movement. It is a complicated design, but one that never has worked.

In the 1970s, Carlo Pedretti, currently director of the Armand Hammer Center for Leonardo Studies in Los Angeles, became interested in what seemed to be random squiggly lines drawn within the two large forward gear wheels of the CA812r. Pedretti also studied two smaller round peg-toothed gears that appear on top of and at the forward corners of the cart in the main sketch. Like the lines, these gears were also ignored by earlier researchers.

Finally, in 1997, while working with robotics guru Mark Rosheim, Pedretti discovered the missing link that would cause the machine to move. Each of the two previously ignored top-mounted front-corner gears links to a small toothed gear below the deck. The latter gear’s teeth mesh with the teeth of the corresponding large central gear wheel, which has a three-dimensional housing that contains one coiled spring. You spool up the two coil-spring “accelerators” within the main gear housings by hand: Standing in front of the model, you turn both top-front corner peg-toothed wheels  inward toward the center of the car, while another person lifts up the car from behind. Each of the iron springs is 23 feet long and can be tightened quite a bit, depending on how far you wish the model to travel. When the housings of the central gear wheels turn under the released tension from the tightened springs within, they move the two smaller gears, which then turn the two front wheels. Fully cranked, the CA812r has traveled nearly 164 feet.

When i visit the museum in Vinci, several months after the model has been unveiled in Florence, I meet with the team from the Opera engineering firm in Florence that constructed the CA812r using the Pedretti-Rosheim digital renderings. Niccolo Nicolai led the design effort, Tommaso Cannavale was head of construction, and Laura Stiattesi acted as the overall director of the project.

After viewing the nonfunctional model created in 1953, we enter another room where a large, 3:1 scale version of the Pedretti-Rosheim design is on display. Following that April presentation at the History of Science museum, many media members incorrectly reported that this chunky version was the actual working model. Not so, says the team. “This 3:1 model was built just to show better all of the engineering ideas behind the car,” says Nicolai. “At this scale, the vehicle is far too heavy to be moved or steered by the spring mechanism.” The 1:1 model under Plexiglas in the next chamber is the one that is self-propelled. We remove the protective lid on the display and hoist the model off its pedestal and place it on the tile floor, so that we can take it for a test-drive.

When da Vinci conceived of his machine, only two choices of building materials were available: wood and metal. Wood was suitable for a wheeled cart because it kept the weight down, and da Vinci’s design required iron coil springs for motion, leaf springs for speed regulation and steering, and wheels with iron “treads.” To transport a piece of theatrical scenery across a stage, it was crucial to minimize the weight of the cart itself.

“In the Renaissance, carpenters knew what parts of which trees worked best for every purpose,” explains Nicolai. “The harvest was very specific. These days almost all woods can be made strong enough for most uses, and we have plywoods. However, we needed to do it all in a way befitting the realities of Leonardo’s lifetime.”

Cannavale elaborates: “The entire frame and front axle housing are in oak for hardness and strength. Wheel rims need to be able to expand and contract easily with temperature changes and dampness, so we used elm—just as northern Europeans have always used in wooden shoes—and ash for its elasticity. Finally, we used holm oak [holly oak] for all of the gear teeth for its extreme hardness and density.” All the metal is iron that was custom-forged by smithies, except for the pair of cast bronze scissor arms on the top of the cart. “Here I needed a material [bronze] that could be both strong and sturdy while being thin and precise,” says Cannavale. “Bronze was also a material often used in the Renaissance for such purposes.”The thin, bowed bronze arm that begins in the back at the right and bends left to end over the large left front gear wheel acts as a lever designed to move a piece of theater scenery. For instance, a bird could flap its wings or a lion’s chest might open to reveal flowers. The other bronze arm is part of the steering mechanism.

The wheels were designed in collaboration with engineers from Maserati; the front wheels measure 8.7 inches in diameter, while the single rear wheel is 6.7 inches across. The 21.1-inch front track is wider than the width of the chassis to ensure stability. Some media members have reported that the CA812r can travel only in a straight line or steer only to the right. This is incorrect; the 28-pound cart can take several different trajectories toward the left or go straight, but it cannot turn right. The cart’s path depends on the number of cams that are inserted atop the large right-hand gear wheel. As many as 10 cams, each with a different shape to help create a different path, rub against the second bronze arm that curves forward from the left rear. As that bronze arm hits the cams, its movements are sent straight to the rear wheel, which steers the path. Leave all 10 cams in, and the left turn is sharp. Remove all of the cams, and the cart bolts straight ahead.

Our test-drive of the CA812r unfortunately ends with its first cart-to-cart crash. After an initial zero-to-3-mph acceleration run with four of the cams inserted, we later try a second run. We forget, however, that this time all the cams are in place, and the cart takes a sharp left turn, directly into the iron tread of the 3:1 model’s right front wheel. The oak frame of the smaller cart withstands the impact well, sustaining only a shallow flesh wound, about 2 inches long, that can be repaired.Both Nicolai and Cannavale maintain that the CA812r could have been designed to turn both right and left, simply by dividing the cams equally between the two large forward gear wheels and allowing both bronze arms to effect the steering via the rear wheel. Another design improvement would include the addition of two independent semi-axles up front for maneuverability. “Yes,” says the sage Signora Stiattesi, “but then it wouldn’t have satisfied the goals of the project.” Those goals were to build CA812r just as it had been drawn, proving that it was indeed a self-propelled vehicle—a precursor of the automobile—conceived by da Vinci’s genius five centuries ago.