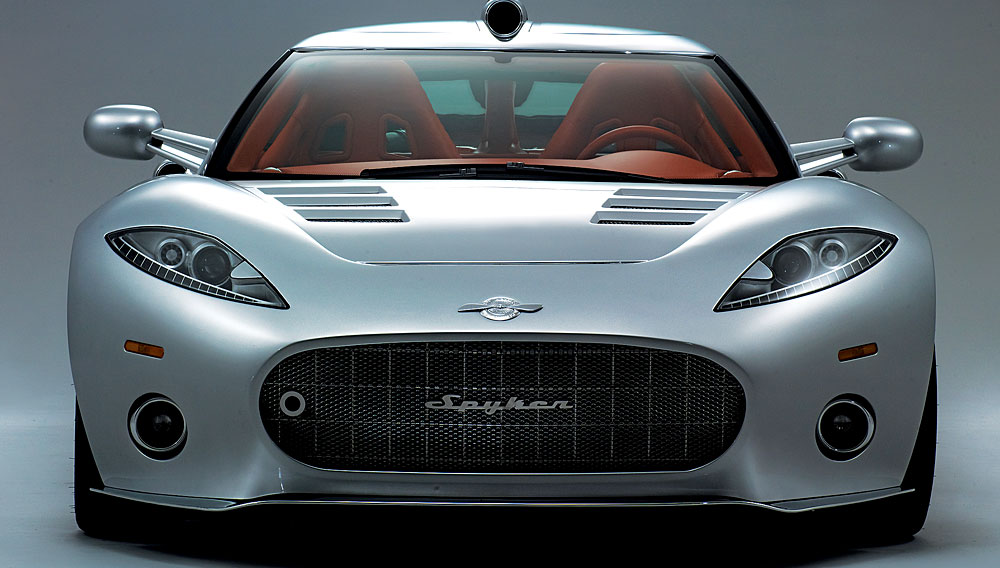 At first glance, the Spyker C8 Aileron may inspire conflicting emotions among those with an affinity for modern supercars. Accustomed to the sleek but relatively unadorned appearance of the Ferrari Enzo and Lamborghini Diablo, they might consider the Aileron’s extroverted styling and abundance of “jewelry”—polished rings frame the prominent air intakes, and bright mesh coverings serve as front and rear grilles—as intentional misdirection, signs that what lies beneath the exquisitely finished skin might be something less than serious.

A drive in the latest Spyker will disabuse doubters of such thoughts. This is a car that promises much, and delivers more. It serves up ample speed and a tenacious hold of the road. Its cabin, swathed in fine leather, offers a supremely comfortable environment. It is, at minimum, the equal of any car in its class in the ways that really matter. That such a competent automobile has come from a small manufacturer in the Netherlands—one that has built less than 300 cars in nine years—is little short of miraculous.

Recently, Robb Report caught up with the man behind the miracle, Spyker founder and CEO Victor R. Muller. Beneath his affable public persona lies a steely ambition tempered only by a healthy dose of realism. As an automotive executive, Muller stays focused on what he expects his cars to deliver. “I am the ultimate consumer of my own products,” he declares, drawing from years of collecting and driving luxury and performance automobiles both modern and classic. Like Ferruccio Lamborghini before him, Muller was not satisfied with existing supercars and concluded he could improve upon them. Moreover, he felt certain that others would find his vision equally appealing. After roughly three years of planning and preparation, Muller unveiled his first Spyker, the C8 Spyder, in 2000. Unlike Lamborghini, however, Muller did not set out to build a better Ferrari. He professes admiration for certain cars, notably Bentleys and Ian Callum–designed Aston Martins, and sees the Spyker as an addition to an enthusiast’s automotive fleet.

The new Aileron joins the existing C8 Spyder roadster and C8 Laviolette coupe models in the Spyker fleet. In the near future, the company’s lineup will expand to include, among other vehicles, the D8 Peking-to-Paris, a radical four-passenger, 550-plus hp all-wheel-drive machine Muller describes as a SSUV (super sport utility vehicle).

spyker was established in 1875 as a maker of horse-drawn carriages. About 20 years later the company was building automobiles in Amsterdam. Innovation followed: In 1903, Spyker created the world’s first 6-cylinder, all-wheel-drive passenger car, thanks in part to the talented designer Joseph Valentin Laviolette, whose name graces a 21st-century Spyker, the aforementioned C8 Laviolette coupe. World War I and money woes forced the company to merge with an aircraft manufacturer in 1914. Upon cessation of hostilities, Spyker returned to producing automobiles but went into bankruptcy in 1925. Patriotism and an appreciation for the history of one of the few Dutch automakers led Muller to bring the name back to life in 2000.

“Aileron” is of course an aircraft reference, and other aeronautic touches, including the Spyker’s propeller-badge motif, which dates back to 1914, abound. Muller derived some design inspiration from jet airplanes, likening the Aileron’s wheels and interior vents to turbine blades. Interior fitments, such as the row of toggle switches that control lighting, heating, and other necessary functions, fall into the same category.

Styling elements aside, everything under the Aileron’s light-alloy skin is strictly business. From Audi comes a 4.2-liter, four-cam V-8, tuned by Spyker to deliver 400 hp. German manufacturer Getrag provides the 6-speed manual gearbox, while the optional 6-speed automatic comes from ZF Friedrichshafen AG. Lotus designed, developed, and built the front and rear suspension units, and the brakes come from AP Racing (in time, ceramic discs will be optional). All of these pieces are mounted to an aluminum space frame, similar to the unit used in earlier models but lengthened and redesigned for increased rigidity.

Once assembled, these disparate components function as if they all came from the same factory. From the outside of the car, the engine’s roar is properly healthy; from the inside, the sound is entertaining, yet never obtrusive. The engine also delivers plenty of thrust: Spyker claims the 3,142-pound Aileron goes from zero to 60 mph in less than 4.5 seconds and achieves a maximum speed of 187 mph.

Yet it is Aileron’s handling that merits the most praise. Muller does not approve of electronic assists such as traction or stability control for the Spyker. Instead, he believes in a combination of precision suspension, tires that grip the road firmly, and attentive driving—a formula that seems to work. The Aileron can corner at speeds beyond the capabilities of most drivers, and it rewards the expert with precise steering, racecar-like stability, and utterly predictable responses at maximum velocity.

At a more leisurely pace, this model is equally engaging to drive, yet its comfort level approaches passenger-car standards. The racing-style seats are properly supportive and more than acceptable for long-distance use, though larger drivers may want to take advantage of a custom fitting at the factory. Materials and finish work are beyond reproach. There is a definite handmade look to the interior, a pleasant change from the injection-molded perfection of most modern cars. A superb Kharma system—also made in the Netherlands—incorporates digital audio, Bluetooth connectivity, a navigation system, and more.

Despite its compact outward appearance, the Aileron is roomy inside. The scissor-type doors do not impede ingress and egress, even if closing them requires a slightly awkward pull. On the track, even a 6-foot-plus driver can wear a helmet comfortably and will find plenty of space for feet on and around the large, bottom-pivoting pedals. A sizable insulated luggage bin is situated behind the engine bay.

The two Ailerons we test-drove were prototypes, and refinement work continues. As presented, both needed brake work—the culprit was excessive power assist—and fine-tuning of a heavy and somewhat imprecise gearshift linkage in the manual-transmission vehicle. Furthermore, rearward vision through the small back window, reduced further by the engine’s air inlet, is sparse and demands reliance upon outside mirrors.

Yet, most Aileron owners will probably not spend a lot of time looking back. They will instead revel in the Spyker’s design, the uncanny capabilities of the engine and chassis, and a virtually limitless array of options, color choices, and custom features, including dial packages from the makers of Chronoswiss watches (more attractive than readable, alas) and Louis Vuitton.

They will learn that Spyker ownership offers admission to a small but enthusiastic group, a family for which the company stages exclusive driving and social events. Muller claims to know almost every Spyker owner personally, which does not seem an idle boast. After all, the Aileron’s starting price of $214,990 (manual gearbox) buys much more than a car: It buys passion and pleasure, which are fundamental design elements in every Spyker.