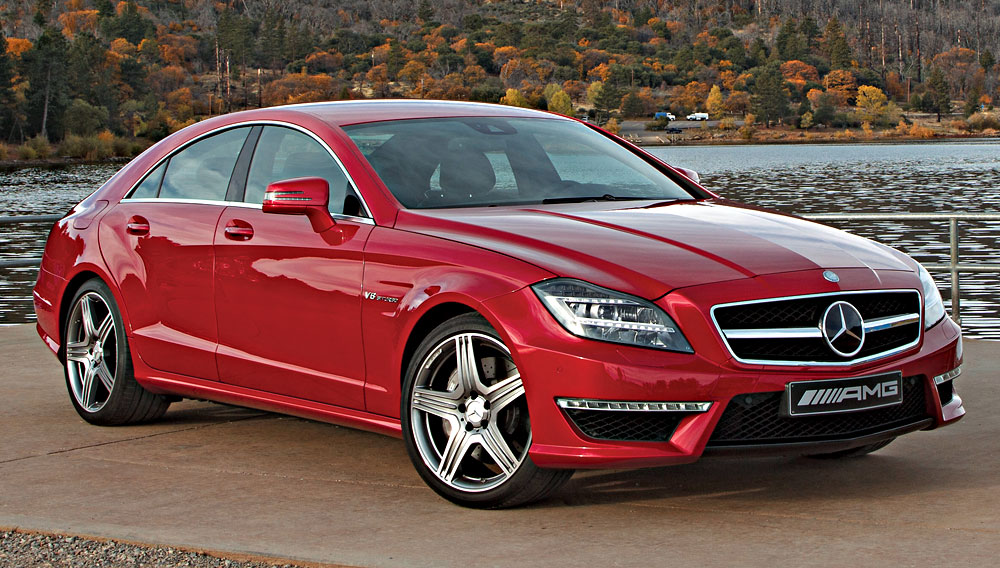 Our introduction to the new Mercedes-Benz CLS63 AMG took place this winter in the mountains of Southern California, where broad interstates leaving San Diego become two-lane byways. We dawdled past avocado farms, blasted along straight and empty roads between small towns, and challenged the brakes and suspension by taking 25 mph corners at twice that speed. Nothing this luxurious should be driven this mischievously, but the two-ton Mercedes did not skip a beat or miss a mark; when tested on those turns, it remained as flat as a board and always in absolute control.

The 2012 CLS63 AMG, which is expected to arrive in showrooms in June bearing a price tag of about $100,000, offers the most precise steering among the cars in its midsize-sedan class (Mercedes-Benz classifies the car as a four-door coupe). Its brakes work better than a drag chute. Its torque, even when the car is in seventh gear and cornering at some ridiculously low speed, is instantaneous and full-bore and exhilarating.

For centuries, Germany has been producing a steady succession of big thinkers whose surnames alone have come to represent the country’s high achievement in all things mechanical and scientific: Fahrenheit, Röntgen, Diesel, Einstein, and Messerschmitt. Also on this list are Benz and Daimler—Karl and Gottlieb, respectively—the geniuses who, 125 years ago and independent of each other, invented the motorcars that begot the Mercedes-Benz lineage of luxury automobiles. The new CLS63 AMG, a latest extension of that line, is yet another symbol of Teutonic technological advancement.

The sedan has a new biturbo engine that develops more horsepower and torque than the one that propelled the sedan’s previous iteration, and it does so with more efficiency—enough, in fact, perhaps to shed the gas-guzzler label (and accompanying tax) that the U.S. government applied to the previous model. Mercedes-Benz also has softened the car’s shape and modified its dimensions without sacrificing any of its athleticism. Blessedly, the exhaust note continues to crackle and rap like a tiger with a firecracker in its teeth.

Sans AMG muscle, the CLS63 still would impress with just its appearance and traveling comforts. With the fire, fury, and brimstone from Mercedes-Benz’s performance division, this may be the best bundle of four-door automotive attributes ever. It can be mild enough for Mother, or it can furnish sufficient energy and punch to satisfy the sports-car commando she married.

Like the original CLS63 AMG, which debuted in 2004, this second-generation model is built on the bones of the mundane, lightly starched, and upright E-Class. But it slinks lower and wider, and so it looks much larger. The new design has retained the one-bar grille that Mercedes-Benz introduced in 2009 to further distinguish the AMG models, and it has added the fender flares that the CLS550 displays. But the hood appears broader than that of the previous model because Mercedes-Benz has extended the car’s track by nearly two inches, and the front air dam is deeper and wider. These subtle changes only enhance the car’s nearly perfect proportions and its look of polite menace.

The true beauty of the CLS63 AMG is its silhouette, a play of swooping and descending lines that fool the eye into seeing a sporty two-door coupe instead of a four-door sedan. Mercedes-Benz designers pioneered this optical illusion that has since been borrowed by Bentley, Maserati, Porsche, Jaguar, and Aston Martin for their midsize sedans.

If the CLS63 appears somewhat soft and slightly feminine, especially for a car carrying the brute-force reputation of AMG, well, that is precisely the way Mercedes-Benz wants us to view it. “The idea was to alter the appearance to make German cars more fashionable,” explains Mercedes-Benz events and marketing specialist Joerg Zwilling. The car’s designers, he says, looked to Italy for inspiration, “because there is nothing quite as fashionable as Italian designs.”

The CLS63 AMG’s exterior changes might be slight, but under the hood the sedan underwent a near-total rebuild. Gone is the relatively new AMG-sourced 6.3-liter, normally aspirated V-8 that produced 507 hp and 465 ft lbs of torque. It also drank like W.C. Fields, delivering only 12 mpg in town and 18 mpg on interstates and autobahns. Now the sedan is powered by a spanking new AMG-sourced 5.5-liter V-8 with a pair of direct-injection turbochargers that puff the hp up to 518 and provide 516 ft lbs of torque. The old CLS63 sprinted from zero to 60 mph in just under five seconds; the new version reaches that speed in just over four seconds.

The smaller but more powerful engine delivers 16 mpg on city streets and 21 mpg on the open road. These are not exactly Prius numbers, but they do represent a 33 percent improvement in fuel efficiency compared to the previous model’s mpg ratings. Mercedes-Benz also equipped the car with a long-legged 7-?speed gearbox and a stop-start system that kills the engine at red lights and gridlocks and restarts it once the driver releases the foot brake and applies pressure to the accelerator. In this respect, the AMG is akin to a Prius.

For the truly power hungry, Mercedes-Benz offers an optional performance package that increases the turbo boost from 14.5 pounds per square inch to 18.8 psi, the horsepower mightily to 550, the torque to more than 590 ft lbs, and the top speed to 186 mph. The zero-to-60-mph time drops to 3.9 seconds.

The performance-package features also include light alloy wheels, an Alcantara-covered steering wheel, and a thin, cheeky, unpainted carbon-fiber spoiler lip—just so the neighbors know what a high performer the car’s owner really is.

The sedan’s interior is elegant and refined: The driver and passengers are surrounded by premium leather that provides wraparound comfort and by door and dashboard trims of burled wood, piano lacquer, or carbon fiber. To relieve the tedium, stress, and effort of driving, this car offers more toys than FAO Schwarz. The list of standard comfort and convenience trinkets is 27-items long and includes ambient lighting, iPod and MP3 media interfaces, and a navigation system that is simpler to operate than an abacus.

Steel struts at the front end and air suspension at the rear add tautness to the ride, while automatic load leveling and damping tame all road surfaces. The suspension has three settings: Comfort, Sport, and Sport Plus. The first is suitable for Rodeo Drive, the third for the Nürburgring.

Mercedes-Benz has targeted Jaguar’s XFR, Porsche’s Panamera, Aston Martin’s Rapide, and similar midsize sedans as competition for the CLS63 AMG. If this car proves a monumental headache for Mercedes’ rivals, they can find relief thanks to another German genius whose name may not be as well known as others’: Hoffmann, Felix Hoffmann, the chemist who, while working for Bayer in 1897, earned credit for inventing aspirin.