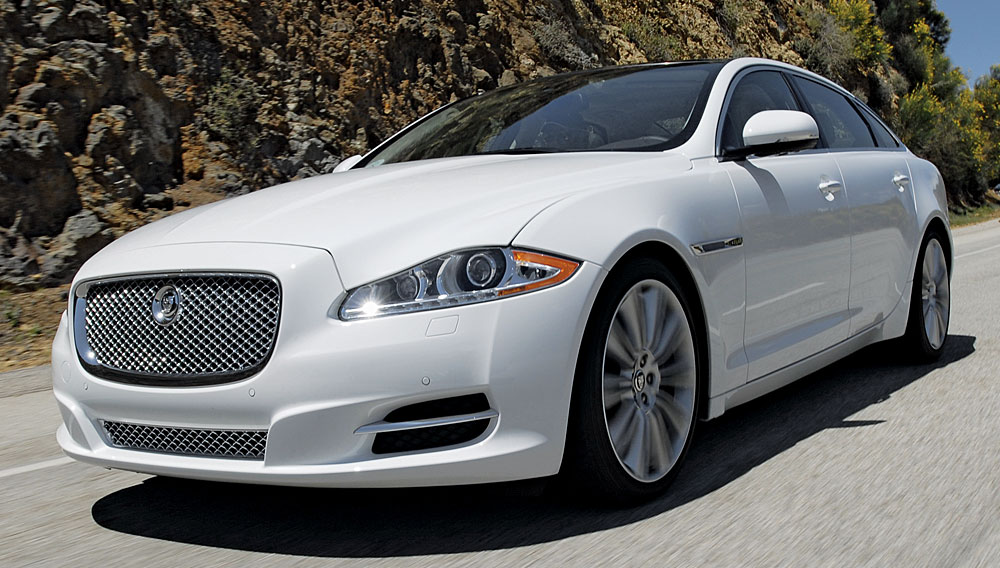 Since the launch of the original XJ6 in 1968, Jaguar fanciers have regarded the XJ as one of the world’s sexiest sedans. For more than four decades, Sir William Lyons’ formal four-door aged gracefully, showing improvements through each subsequent generation of the model. Every XJ combined the traditional accoutrements of British luxury with the aesthetic flair established by its predecessor, the Mk2 sedan. For those who prefer understated luxury and fiscal prudence, Jaguar’s XJ has always presented a sensible alternative to the conspicuous flamboyance of the Rolls-Royce and Bentley saloons that top the hierarchy of British sedans.

When the Jaguar brand became a part of the Tata empire in 2008, industry watchers wondered how the aging XJ would fare in the transition. In hindsight, the XF unveiled in 2008—a radical design departure for Jaguar—gave a good indication of what the future held in store. From the ground up, the 2011 XJ is an all-new car, sharing with its earlier iterations little more than the feline leaper and model name. Jaguar Cars design director Ian Callum (also the designer of Aston Martin’s exquisite DB7 and Vanquish) started with a blank slate and a brief that called for an altogether more sports-oriented Jaguar sedan: an agile cat that could run with the big dogs from Deutschland—Audi, BMW, and Mercedes-Benz.

With a grille that tips its hat to the very first XJ—but without any of the cloying retro references that dilute the purity of some contemporary automobiles—the new XJ represents a daring departure from tradition. “It’s not for us to copy, but to take them into the future,” says Callum of the marque’s cars, whose design initiatives he has overseen since 1999. The bold teardrop shape of the XJ body makes a striking first impression. Callum and his team have fashioned a sedan that combines a fluid, coupelike profile with a spacious and open interior, thanks in large part to a panoramic glass roof. The glass panel blends seamlessly with the body in one unbroken line, creating the illusion of great length when, in fact, the car is only one inch longer than the outgoing model. “Every line has a job to do,” says Callum. The practical result of this streamlined form is the sedan’s extremely low drag coefficient (Cd) of 0.29, which translates to low wind noise and better highway fuel-efficiency.

For today’s autos, environmental concerns extend beyond simple fuel-efficiency to manufacturing methods. The concept of a $100,000 luxury sedan constructed mostly of recycled materials was inconceivable when the first XJ was born. Stiffer and lighter than steel, the new XJ’s lightweight body and chassis are made of 50 percent recycled aluminum—the equivalent of about 12,000 soda cans. The body shell is at least 300 pounds lighter and considerably stronger than a comparable steel shell. The selective use of cast magnesium components for various subassemblies further reduces weight while enhancing strength.

Aimed squarely at the top-tier luxury cruisers, the XJ is available in standard- or long-wheelbase versions. The long variant, called the XJL, provides an additional five inches of length behind the B-pillar yet adds less than 200 pounds to the standard car’s weight. Jaguar anticipates that nearly half of all XJs sold will be the base-model XJL.

The XJ and XJL come in three different models—base, Supercharged, and Supersport—each with progressively greater power output and levels of trim. The engine in all three is Jaguar’s aluminum 5-liter, dual-overhead cam V-8 with direct fuel-injection. This powerplant is mated to a quick, smooth-shifting 6-speed automatic transmission, whose operation is compromised only by the JaguarDrive Selector, a tedious console-mounted dial that complicates functions better controlled via buttons or a traditional lever. Responsive paddle shifters are standard on every model.

The transmission incorporates three driving modes: Normal, for the daily grind or for long-distance journeys; Dynamic, for sporting romps; and Winter, for the low-grip terrain that many drivers will encounter seasonally. Each of these modes fulfills its function by making appropriate adaptations to engine mapping, transmission shift points, shock damping, and electronic intervention from the Active Differential Control and Dynamic Stability Control systems.

The naturally aspirated XJ and XJL, which run on 19-inch wheels, produce a respectable 385 hp and 380 ft lbs of torque. Performance-oriented types will opt for the Supercharged XJ or XJL, which add an Eton supercharger to the same 5-liter engine. Output on these models is 470 hp with 424 ft lbs of torque—impressive numbers that really make these cats get up on their haunches and move. For those who must have the top XJ or XJL in the lineup, the custom-order-only Supersport edition extracts even greater power from the supercharged powerplant: Its 510 hp and 461 ft lbs of torque achieve a zero-to-60 time of 4.7 seconds. The manufacturer embellishes this massive power with aesthetic touches to the car’s interior that include a leather headliner, semi-aniline leather seats, and inlaid wood. Curious passengers who open the Supersport glove box will be surprised by its brilliant purple lining—a colorful anomaly in the otherwise sedate, drawing-room-like interior. All Supercharged and Supersport configurations feature distinctive 20-inch wheels designed for the XJ series.

Regardless of the model, the interior of the XJ will not disappoint Jaguar purists who respect tradition. The new sedan adds a 21st-century twist to the hallowed Jaguar theme of wood, leather, and old-world opulence. The front seats adjust 20 ways and offer ventilation and massage functions, while the rear seats—especially in the long-wheelbase version—set the standard for comfort. Practical niceties that make life easier for city and highway driving include xenon headlamps with an intelligent high-beam system, LED rear lights, blind-spot monitoring in the rearview mirrors, a rear camera to aid in judging distances in reverse, and water-repellent glass for greater visibility.

Once behind the wheel, drivers will notice no physical instrument cluster; instead, the XJ relies on computer-generated virtual gauges that have the appearance of traditional analog dials and arrange themselves depending on which driving and navigation programs are engaged. The standard sound system in both the Supercharged and Supersport models is a 1,200-watt, 20-speaker masterpiece that transforms the cabin into a rolling concert hall. Audiophiles will recognize in the yellow Kevlar cones of the door-mounted speakers the trademark of Bowers & Wilkins, the company retained to engineer the system for these new XJ models.

As we began our much-anticipated test-drive of the Jaguar four-door, we gauged public reaction to the new design. Leaving the Sunset Marquis hotel in West Hollywood, Calif., and snaking up Sunset Boulevard toward the beach, the XJ clearly commanded attention. Granted, the city was crowded with billboards announcing the vehicle’s arrival, and our parade of test models was impossible to ignore. But this car received admiring glances throughout our drive, even with no other XJ in sight.

From inside, we noticed that this big Jag does a superb job of insulating occupants from the exterior noise of surface streets and traffic-clogged freeways. In the latter environment, we could think of no better place to be than inside this quiet and comfortable luxury sedan. But even more rewarding was the opportunity to unleash the otherwise sedate beast and attack a curving road. Peeling off the Pacific Coast Highway into the canyons, the vehicle morphed from luxury cruiser to sport sedan with the flick of a dial. In Dynamic mode, the shocks stiffened and the engine revs ran to redline. Seat-of-the-pants comparisons with competitors like the Mercedes-Benz AMG S-Class will not leave hard-core sport-sedan owners wanting. Throwing the XJ at speed into tight sweepers on familiar roads revealed the car’s seeming ability to shrink its dimensions—a feat accomplished by responsive handling dynamics and powerful, linear brakes that inspired confidence, even when they were applied aggressively.

Our comparison of the base-model and Supercharged versions yielded interesting results. The torque of the normally aspirated engine was absolutely satisfying, until we experienced the higher-output Supercharged XJL. Only a back-to-back drive with the 470 hp version demonstrated that power—and the rewards it conferred—was relative. Though the base-model XJ will more than fulfill the expectations of most drivers, committed gearheads obsessed with pushing limits will crave the extra punch of the seamlessly integrated twin-scroll supercharger.

Prices range from $72,500 for the base-model XJ to $115,000 for the XJL Supersport. By coming to market with attractive pricing, particularly on the base models, Jaguar hopes the XJ series will entice buyers away from competitors’ more expensive offerings. To sweeten the deal for potential owners wary of scheduled maintenance costs, the manufacturer includes Jaguar Platinum Coverage, a five-year, 50,000-mile warranty that provides free service and replacement of every wear item except tires. This bold proposition may prompt even cautious buyers to pounce at the opportunity to park a new Jaguar in the garage.