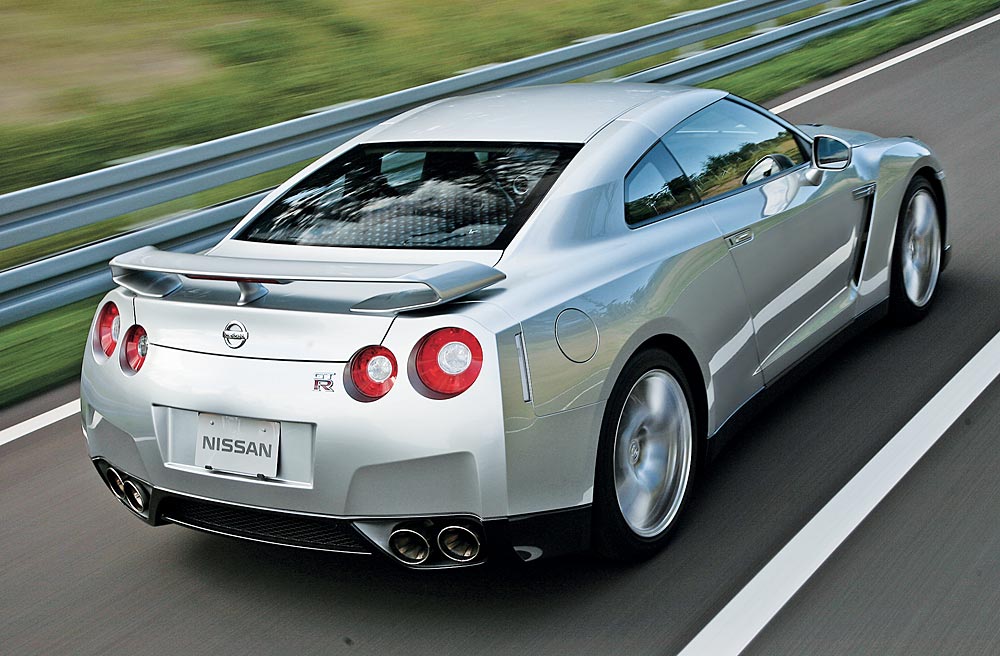 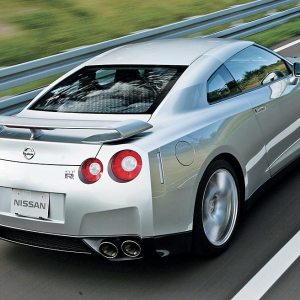 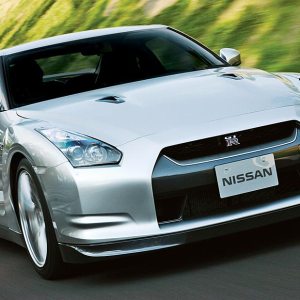 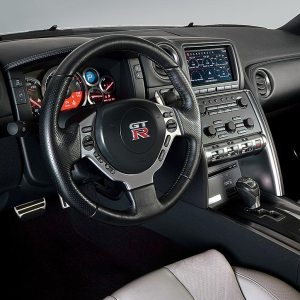 Like most video games, the Nissan GT-R has a built-in cheat code. Flip three switches on the dashboard until they all light up—activating “R,” or race, mode—then depress the brake and step on the accelerator. This sequence activates the GT-R’s computerized launch control, which sets its twin-turbo, 3.8-liter V-6 engine at 4,500 rpm. When you lift off the brake, the GT-R emits a brief tire chirp and some driveline thump as it divides torque among its four wheels, launching the vehicle, under ideal circumstances, to 60 mph in 3.3 seconds and to the quarter-mile mark in 11.5 seconds. You would have to visit a showroom full of supercars—with prices that range from $100,000 to $500,000—to find comparable performance.

Called Gojira (which is Anglicized to “Godzilla”) in Japan, the Nissan GT-R is wading ashore in North America this year with a price tag that belies its performance. Compared with the $71,000 GT-R, Porsche’s $126,000 911 Turbo is dawdling, as is Ferrari’s $190,000 F430. Count hulky American sports cars among its victims, too—the Chevrolet Corvette Z06, Dodge Viper, and Ford GT are all slower to 60 mph.

About the only thing that precedes the GT-R is its reputation. Nissan has teased the car in the American market for years, tantalizing teenagers by featuring the GT-R in video games, where it has long been known as the Nissan Skyline GT-R. In addition to the virtual world, the car has existed as a Japanese-market super coupe since 1989. That all-wheel-drive, twin-turbocharged V-6 iteration has achieved some astonishing feats in its day; in 1997, for instance, it became the first production car to post a sub-eight-minute lap at Germany’s fabled Nürburgring.

For the GT-R’s North American media launch, Nissan selected the Reno-Fernley Raceway and the Sierra Nevada range near Lake Tahoe on the California-Nevada border. During test-drives around the track, the GT-R not only posted impressive times but also produced a rare consensus: Each of the automotive writers in attendance agreed that the 480 hp Nissan, which has a top speed of 193 mph, was the undisputed value leader among vehicles with supercar aspirations.

Peter Bedrosian, regional product planner for the GT-R, explains that Nissan’s expertise at developing and manufacturing high-volume vehicles helped it keep costs down for this specialty car. “One thing we know how to do versus other supercar-makers is mass-produce,” Bedrosian says. “We had about half the engineers you’d see on a typical program, but all hand-selected by [chief engineer] Kazutoshi Mizuno, including our best engine guy and best chassis guy.”

Mizuno’s picks proved to be wise ones. At the 13-mile Nürburgring, an international benchmark for performance, the new GT-R posted a 7 minute, 29 second lap—the fastest ever for a production automobile. The Porsche Carrera GT, which costs roughly $370,000 more than the GT-R, was three seconds slower.

The Nissan tempers this blistering performance with a bucketful of electronic controls. Put your grandmother in this car, and she would turn respectable lap times. On a road course in Nevada’s desolate mountains, I practically dared the GT-R to spin, but to no effect: When I turned late into a corner, the all-wheel-drive and stability systems sorted everything out. The Nissan felt as planted in corners as a century-old oak.

The GT-R’s technological wizardry includes a hand-built engine that uses plasma-coated cylinders instead of cast-iron bores to reduce heat, boost power, and improve fuel economy. (The car meets ultralow-emissions standards, a rare feat for such a powerful vehicle.) Brembo brake calipers clamp floating, 15-inch, two-piece, cross-drilled rotors. A body of aluminum, carbon-fiber composite, and steel is balanced by a Bilstein DampTronic suspension that is adjustable between comfort, normal, and race settings. The all-wheel-drive system, which can divert as much as 50 percent of the torque to the front wheels, quickly adjusts power delivery based on multiple parameters, including a calculation measuring the difference between the vehicle’s actual yaw rate and that intended by the driver. In other words, the GT-R can read your mind.

But Nissan’s secret weapon is its dual-clutch, 6-speed, automated manual transmission, whose rear-mounted transaxle optimizes weight balance. A traditional manual transmission is not available, but the GT-R’s paddle-shifter switches gears faster than any human could with a standard clutch. This unit features separate clutches for odd- and even-numbered gears, which lets the transmission preselect speeds and nearly eliminate lag between shifts. The system works well in either manual or full automatic mode, with less lurching in relaxed city driving than occurs with some competing systems. Nissan’s transmission calls into question Audi’s decision to leave its similar dual-clutch system—available on low-?priced models such as the TT—out of the $120,000 R8. (Audi says its unit could not handle high levels of power and torque without upgrades that would increase costs.)

Other features of the GT-R are not so impressive. Twenty-inch wheels tend to bounce on lumpy pavement, and the interior noise levels are higher than those in a typical Porsche. The engine and exhaust noises are also less than inspired. Compared with true supercars—the R8 and anything Italian included—the Nissan sounds muffled and genteel.

Like the Porsche 911 Turbo, the GT-R is not above a grocery run or a daily commute—assuming you do not plan to carpool. Two cramped rear jump seats are useful only for carrying cargo, offering a supplement to a reasonably spacious trunk. The Nissan weighs close to 3,900 pounds, which is like strapping two NFL linemen to the roof of a Corvette Z06.

The GT-R also is not a particularly pretty vehicle in the classic sports-car sense. It is a functional, mechanical brute that Nissan creative officer Shiro Nakamura likens to the giant robots of the Gundam anime series. Yet the car offers intriguing details, from the asymmetrical windows and blade-shaped fender cooling vents to a carbon-fiber rear air diffuser and dark forged-aluminum wheels. Buyers can opt for all-season or run-flat summer tires.

Inside, the GT-R is the most deluxe Nissan ever made. Leather lines the instrument panel and doors, although a jumble of shapes, boxes, and binnacles makes the dashboard resemble a half-finished puzzle. A central display screen designed by Polyphony Digital, the company that developed the GranTurismo video game for Sony, offers a dizzying array of 17 performance parameters, which measure everything from lateral g force and front/rear torque split to throttle position, steering angle, and, of course, lap times. But aside from turbo boost, engine oil pressure, and temperature readings, few of the measurements are anything that anyone would care (or dare) to peek at while driving this monster of a car.

Such aesthetic quibbles meant nothing to the twentysomethings who spotted me prowling around the Nevada countryside. At a 7-Eleven, a group of car enthusiasts surrounded the GT-R and proceeded to tick off performance-related facts and figures like baseball fans reciting their favorite player’s statistics. With such a fan base, Nissan seemingly will have no trouble meeting its expectation of selling about 2,400 GT-Rs in the United States in the first year. But even at $70,000, the Nissan is still out of the price range of most 20-year-old gearheads, which raises the question: Who is the audience for the GT-R?

Nissan says that several orders have come from people with fond memories of their old Nissan Zs who now have several supercars in their garage. “We’re finding that, for many owners of Porsche GT3s and Ferraris, the Nissan will be their daily driver—something they can enjoy without worrying about damaging a $200,000 car,” Bedrosian says. “These are guys who’ve been through the various prestige brands, and now it’s just the performance that matters.”

As the GT-R prepares to buzz these high-priced barnstormers, that performance raises an issue that some competitors might want to ignore. The question should not be why this Nissan costs so little, but why so many slower sports cars cost so much more.