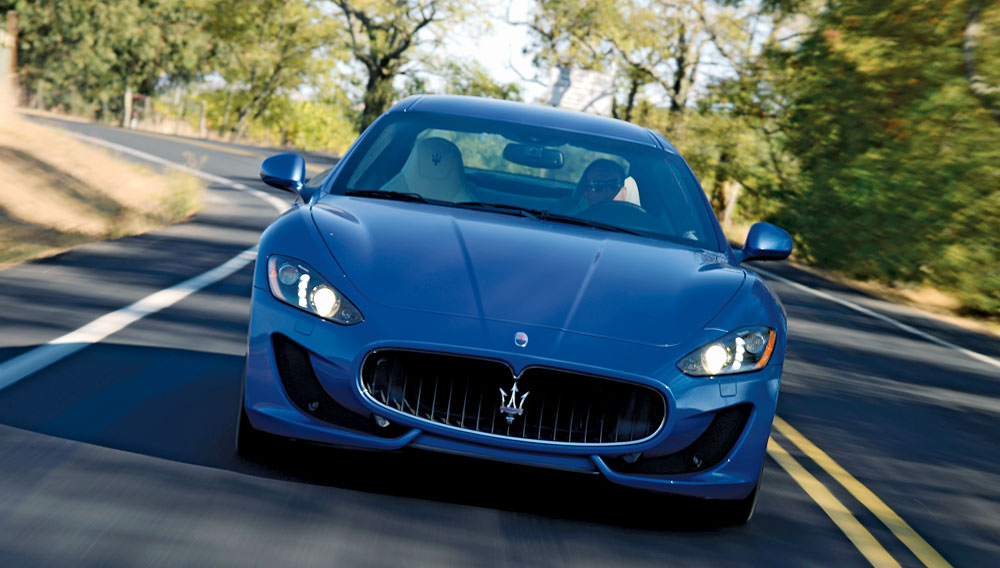 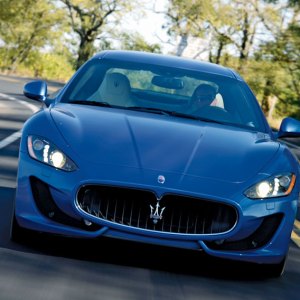 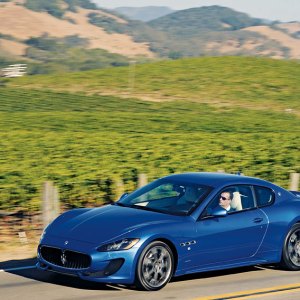 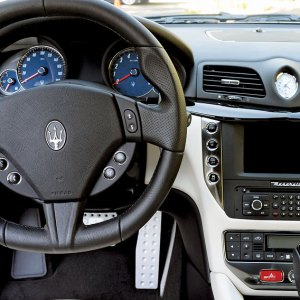 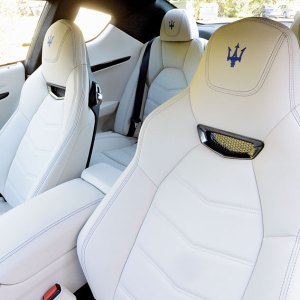 To mark the initial U.S. deliveries of its GranTurismo Sport this fall, Maserati hosted road trips through California’s wine country in the new coupe and arranged a visit to the Sonoma Raceway. At the track, the guests watched gentlemen racers drive their cars through practice laps in preparation for that weekend’s round of the Maserati GranTurismo MC Trofeo World Series.

The sound of the racecars and their unmuffled V-8s evoked a NASCAR stocker, but with an Italian accent. Their shape was even more familiar: The Trofeo cars bore a striking resemblance to the GrandTurismo Sport. Both racecar and road car display the new face of Maserati, a fascia design first seen in 2009 in Europe on the GranTurismo racecar and more recently in the United States on the GranTurismo MC road car, the all-out performance model introduced last year.

The Sport has a look that is more aggressive than that of the GranTurismo S Automatic it replaced in Maserati’s GT lineup, accurately suggesting that the new GT is more powerful than its 433 hp predecessor. Indeed, equipped with a 454 hp V-8, the Sport is as powerful as the latest MC. Both cars have a zero-to-60-mph time of 4.7 seconds and a top speed of 185 mph. The Sport has a starting price of about $126,000. (The MC’s base price is roughly $140,000.)

Like the MC’s fascia, the Sport’s features two large inlets flanking the grille, which is accentuated by a cowl that projects more prominently than the S Automatic’s and looks similar to the nacelle of a jet engine. A lower chin spoiler connects the two inlets, which have sensors that warn the driver of parking barriers and other obstacles in the path of the low-riding nose. Sweeping lines and sill extensions add to the car’s aggressive look.

The engine is joined to a 6-speed ZF automatic transmission that features shifts as quick as 200 milliseconds, rev-matched downshifting, and a sequential manual mode that will hold whatever gear the driver selects. While the engine’s performance and lovely bass notes provide much of the driving excitement, the transmission is the key to the car’s dual nature as an everyday driver and a weekend canyon carver.

Rolling through Sonoma and the surrounding towns, the Sport effortlessly went with the flow of traffic. Unlike other dual-clutch automatics, the Sport’s transmission provided nearly seamless shifts: no low-speed bucking or clunks. The engine sounded great, though muted. The ride was compliant, and the steering was light and precise.

The Sport rides on 20-inch flow-formed alloy wheels that have spokes arranged to recall Maserati’s trident logo. The Sport’s signature color is what Maserati calls Blu Sofisticato; calipers from the Brembo disc brakes that peek out from behind the wheels can be ordered in a matching hue.

The cabin features a sports steering wheel that has a flat bottom, a thickly padded rim, and additional support for resting thumbs in the 10 o’clock and 2 o’clock positions. The wheel is flanked by a pair of paddle shifters for the automatic transmission that are mounted to the steering column—left side for downshifts, right side for upshifts. The front and rear seats feature a new one-piece back design that incorporates the headrests; the front seats are bolstered for excellent back and lateral support.

The dashboard’s analog instrumentation includes Maserati’s uniquely shaped clock, which has a prominent position in the middle of the dash. The rest of the controls are in the center stack. There are lots of buttons, but navigating them is easier than operating some cars’ multicontrol devices.

St. Helena Road, a tight two-laner that leads from Sonoma Valley to Napa Valley, provided the Sport with its first challenge during the drive. With the engine and transmission positioned mostly behind the centerline of the front axle, the Sport has a nearly ideal 49/51 front-to-rear weight distribution. The Skyhook suspension, which has springs and sways that are 10 percent stiffer than the S Automatic’s, provided sure-footed handling despite the potholes and rippled pavement on the Sonoma end of the road. Engaging the sport mode tightened the steering and shocks and opened the exhaust bypass, allowing the engine to really sing.

The turn-ins were crisp. The Sport remained neutral in the corners, and even though the gearshift lever remained in the full automatic setting, the drivetrain seemed to know precisely when to call up a downshift with a rev-matching blip of the throttle.

The ride took us through Napa and across Highway 37 to the raceway, where the drivers were preparing for the fifth round of the Trofeo series. (The sixth and final round was scheduled to take place in early November in Shanghai.)

From the racetrack, we drove the new GranTurismo Convertible Sport toward Point Reyes. The Convertible Sport—a model that was introduced last year with Maserati’s old GT fascia—now incorporates the Sport coupe’s new front end and headlights and has the same 454 hp engine. It has a starting price of about $143,000.

With the top down, my copilot and I reveled in the sound of the engine and marveled at the suppleness of the ride. The Point Reyes-Petaluma Road is smooth, with open bends and terrific vistas. Cruising along at 70 mph produced minimal buffeting and did not prevent us from conversing at normal volumes, which seemed remarkable considering that the car does not have a windscreen behind the front seats. Though not as stiff as the Sport coupe, the Convertible had no detectable cowl shake or flex in the body, even when pushing through tight corners.

Like the Convertible Sport, the Sport coupe is at its best during such spirited driving on open roads. It may resemble a racecar and serve well as a daily driver, but it is by definition—as well as by name—a grand tourer.