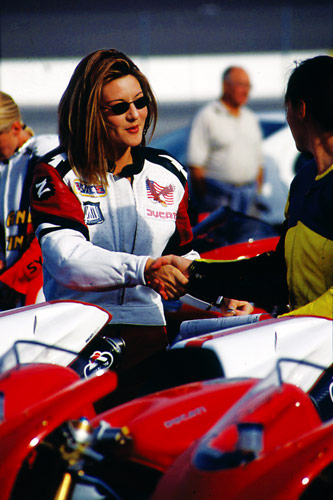 For Rob Phelan, a weekend last October in Las Vegas offered everything he wanted: a chance to meet the people who make his favorite motorcycle, a fast and challenging track to ride on, an opportunity to mingle with other bike enthusiasts, and a shop where he could buy equipment to outfit his ride. But to fully enjoy Ducati Revs America, the first U.S. edition of Italy’s World Ducati Weekend, Phelan needed one more thing: his 1999 Ducati ST2. So he had it shipped from his home in Connecticut to Las Vegas.

Phelan blazed around Las Vegas Motor Speedway on his ST2, rode it at a more leisurely pace around the city, attended Ducati seminars, and shopped for a new set of pipes in the Ducati Performance store, as the Italian motorcycle company marked its 75th anniversary with the Las Vegas event. “DRA was nothing like an American bike maker’s rhinestone leather-fest,” says Phelan, owner of a Connecticut spice distribution company. “Ducati riders are known for being a little off their rockers when it comes to enthusiasm for their bikes, but it’s about the machine, not some image. I appreciate that.”

Through their loyalty for the brand, Ducatisti have created an aura around their bikes similar to the mystique that surrounds Harley-Davidson. Yet while Harley exudes a blue-collar, all-American image, Ducatisti view their bikes—and themselves—as refined, eclectic, and steeped in Italian culture, and they enjoy belonging to a very exclusive club of motorcycle enthusiasts.

In the United States in 2000, Harley sold more than 220,000 bikes, while Ducati sold 7,000 units. “I bought a Harley last April, and a month later, a friend bought the exact same model,” says Kevin Weherly, a California State University instructor who rode his Ducati Monster 750 nearly 700 miles from Chico, Calif., to Ducati Revs America. “I don’t want to be the same as everybody else.”

Jed Kanter also appreciates owning something different from most other motorcycle riders, but not just for the sake of being different. On the first day of Ducati Revs America, Kanter had already whizzed around the track twice. As he approached Turn 5 on his 1994 Ducati 900SS, his heart rate quickened ever so slightly. He entered a section of quick, short turns that he compared to a mogul field on a ski slope, and he could not contain a smile. In an instant, he flicked his 900SS into Turn 5, slammed it right into Turn 6, then left again, and the V-twin sportbike never missed a beat.

Kanter, a partner at Lee Controls, a linear motion component manufacturer in Piscataway, N.J., had driven the smooth stretch of asphalt before. He had attended Freddie Spencer’s High Performance Riding School, piloting one of the school’s new Honda CBR600F4s. Kanter enjoyed the motorcycle, but the 4-cylinder CBR left him wanting more—like a Ducati. “You have to keep the revs up on an in-line four to make power,” he says. “Ducatis have grunt. I love the way their twin power comes on low, versus the multis’ hit-at-the-top powerband.”

Ducati did not always produce such powerful bikes. The company was launched in 1926 as a radio and condenser maker, and Ducati entered the two-wheeled arena after World War II with the Cucciolo, a scooter. Since starting production of its sportbikes, the machines with the growling V-twin motors and racy bodywork, Ducati has excelled in racing, drawing professional riders as well as amateurs into the ranks of the Ducatisti.

On the World Superbike circuit, Ducati’s V-twin–powered motorcycles compete, and win, against the latest and greatest produced by Japan’s big four. When Ducati Corse rider Troy Bayliss won the 2001 World Superbike Championship, it marked the ninth time a Ducati rider had won the crown. “For me, it’s the heritage,” says Richard Weedn, a Santa Barbara, Calif., publishing magnate. “I champion the underdog against all odds. I like it when a small team brings forth giant killers, and I enjoy feeling a part of that.”

Ducati North America introduced its new giant killer at Ducati Revs America: the Ben Bostrom Replica 998 Superbike. The red, white, and blue motorcycle, covered with stars, stripes, and flames, is powered by the company’s new 998cc Testastretta engine, which the company claims will make 123 hp at 9,750 rpm. Only 155 (to commemorate the number Bostrom wears on the World Superbike circuit) of the $22,700 limited edition bikes will be imported to the United States.

Some Ducatisti compare the bodywork of the Bostrom replica and other Ducati models to a Ferrari because of their sleekness and precision, while others liken the shapes and curves of the bike to the female form. “I like design—interior design, industrial design,” says Weherly, whose excitement gave him the shakes as he rode into the Las Vegas Motor Speedway grounds. “Italians know design.”

If anyone knows about aesthetics, it would be Phelan, a former industrial designer. But he says what makes Ducatis special is the way that they blend beauty and operational excellence. “If the Ducati 916 just stayed in my living room for show, I’d be happy,” he says. “But its beauty is one of function. Its style and performance are inseparable.”

The bike’s sexy looks do not necessarily translate to rider comfort—nor are they meant to. Ducati’s pure sporting machines are the antithesis of Harley’s comfort and lifestyle package. As Federico Minoli, president of Ducati Motor Holding, has said, “In some ways, we couldn’t care less about your comfort. That’s for Harley-Davidson. With us, the more you suffer, the better you are.”

Not that Minoli wants Ducati riders in pain, but the point, which Ducatisti understand, is that Ducatis are about performance and racing heritage. Ducatisti carve canyons on the weekend, stretched over the tank and knees out, not slouched back and cruising the boulevard. After a good ride, they show off scuffed-up knee sliders, not tattoos. Most important, they pilot machines that few bikers ever ride. “You can buy a Japanese sportbike for less that will do much of the same thing,” says Kanter, “but everybody has one.”

While the Italian bike maker claims less than a 2 percent share of the U.S. motorcycle market, it seemed to Kanter as though everyone who owns a Ducati was present in Las Vegas. As he gazed upon row after row of red and yellow sportbikes, Kanter had to take a breath to comprehend the collection of Italian technology and design prowess. “Sure, it was about the track time and the museum and the seminars and the parties, but what really did it for me was seeing so many Ducatis in one place,” says Kanter. “You just don’t get that anywhere outside of Italy. It’s awe-inspiring.”