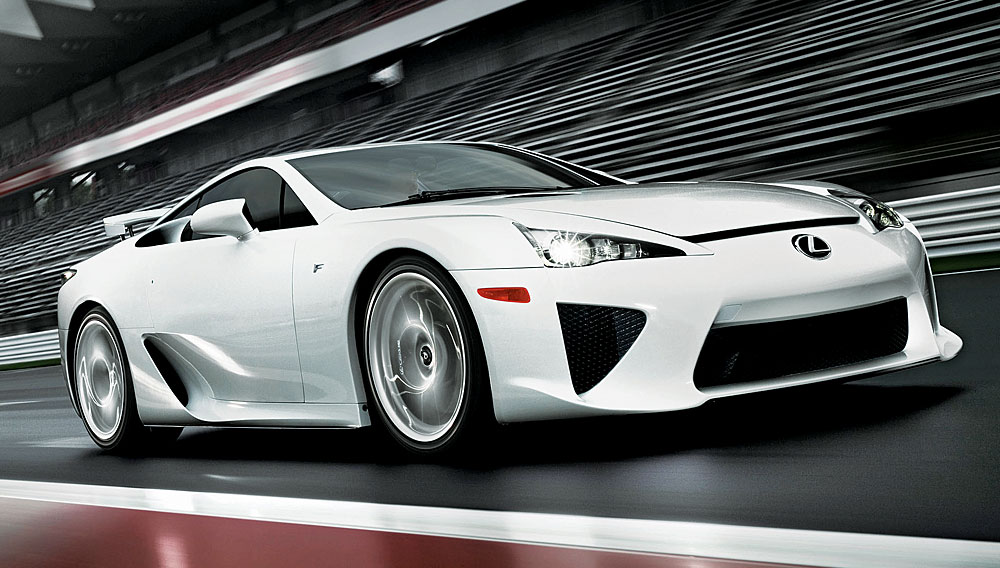 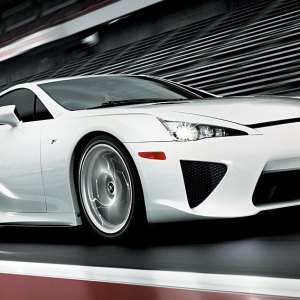 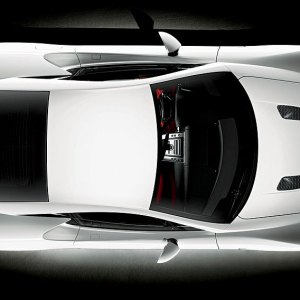 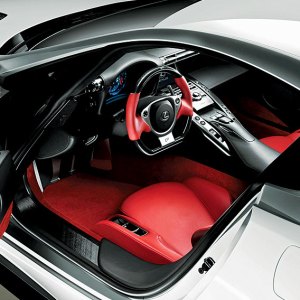 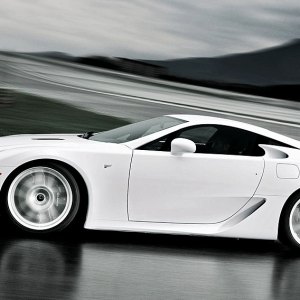 Despite their often futuristic appearances, most modern supercars are, in a sense, things of the past. Each new ultra-high-performance machine from the likes of Aston Martin, Ferrari, and Mercedes-Benz embodies those manufacturers’ long-standing traditions and must measure up to the image established by its predecessors. For this reason, the proverbial blank slate is perhaps the only competitive advantage that newcomers to the category enjoy, as Lexus has learned with its 2011 LFA, an extreme sports model that departs radically from the marque’s discreet luxury-car line.

Of course, founding a new tradition is no simple task. Without historical cues on which to draw, Lexus designers and engineers had to invent their vehicle’s identity from the tires up. Although the LFA takes some inspiration from its competition, these reinterpreted ideas remain fresh, simple, and forward-thinking. Despite the complexity of its operating systems, the first two-seat Lexus is a driver’s automobile that reflects a design philosophy of efficient simplicity. With a top speed of 202 mph, it is also a pure projectile with bracing acceleration that recalls Colonel John Stapp’s famous experimental rocket sled. Still, if the heart and soul of a racecar reside beneath the hood, then comfort and refinement rule in the cabin. After all, the LFA is a Lexus.

The F in this new supercar’s name refers to Japan’s Fuji International Speedway, owned by Toyota, where much development work on this project was done. (The L stands, logically enough, for Lexus, and the A stands for Apex.) Initially, one might be tempted to compare the LFA with the Nissan GT-R (derived from the Skyline GT-R), which is also a high-performance, Grand Touring coupe, albeit an all-wheel drive one. Dimensionally, the two are similar, though the LFA is slightly smaller. Yet the GT-R costs less than one-quarter of the Lexus’ $375,000 base price and uses a fair amount of existing Nissan hardware. Moreover, the GT-R is being made on an assembly line from standard raw materials in quantities far larger than are envisioned for the LFA, which shares few if any components with other Lexus or Toyota models.

The LFA’s provenance, however, shows in its rounded forms, long hood, and short cabin proportions, all of which recall the 2000GT, Toyota’s first high-performance car, produced from 1967 to 1970. Engineers adopted these features for reasons other than aesthetic purposes. The engine is placed far back on the chassis for optimal weight balance between the front and rear of the vehicle, while the need for only two seats allowed for an abbreviated passenger compartment. Minimal front and rear overhangs, as well as tight wrapping of the fenders over 20-inch wheels, further enhance the purposeful appearance of the LFA.

The car’s numerous exterior openings, on the other hand, represent a decided visual departure from the past. There are four apertures in front, two vents in the hood, two inlet scoops on each rear fender, and three large exhaust tips aft. All are functional. The rearmost pair of openings, which exhausts heat from the radiators, also carries the taillamp clusters. Overall, the effect is dramatic yet logical.

Though the LFA body is cleanly shaped, not all of the color options in the available palette will necessarily flatter the car’s lines. Buyers will want to choose carefully from the extensive list of exterior hues, which comprises 10 standard and 20 custom colors, including the sinister matte black on the test model. A similar range of interior choices is offered: 10 colors for the Alcantara suede package and a dozen for leather upholstery.

Regardless of which shade one selects, the most beautiful and impressive attribute of the LFA remains unseen beneath its carbon-fiber body. The frame—more correctly a center monocoque—is constructed from carbon fiber–reinforced polymer (CFRP); this conglomerate of bonded woven tubes, hand-laid box sections, and flat-panel pieces is impregnated with resin, assembled, and cured in an autoclave. An aluminum-alloy subframe that supports the engine and aluminum suspension components is bolted to this carbon-fiber center section using aluminum bobbins—as is the rear light-metal frame that carries the radiators and exhaust system. The vehicle’s total body mass is composed of 65 percent carbon fiber, 35 percent aluminum.

Like this lightweight but sturdy skeleton, the engine is a work of art in its own right. Toyota’s association with Yamaha dates to the 1967 2000GT project, and Lexus engineers chose to leverage this relationship by partnering with Yamaha to create an ultra-compact 4.8-liter V-10 that occupies less under-hood real estate than the standard Lexus V-6. In form and detail, this is a pure racecar engine that incorporates substantial quantities of aluminum in its construction, a separate throttle body for each cylinder, and dry-sump lubrication. It also acts, performs, and sounds like a competition-bred power plant, churning out 552 hp at 8,700 rpm on its way to a 9,000-rpm redline. Unlike a pure racing engine, however, this V-10 delivers power even at low rpms and is wonderfully smooth. A 72-degree angle between cylinder banks virtually eliminates vibrations that affect most 10-cylinder designs.

A torque tube connects the engine to a rear-mounted six-speed automatic sequential gearbox—essentially a hydraulically operated manual transmission—powering the rear wheels. The driver can set the transmission to automatic or shift gears using the paddles on the steering wheel. Computer controls govern four driving modes (Automatic, Normal, Sport, or Wet) that vary the speed of each shift to match the manner in which the car is being driven. Downshifts are carefully controlled as well. The system even regulates the throttle to match rpms to the road speed for smoother upward and downward gear changes.

The LFA’s suspension and braking systems are more or less standard, though the brakes use hollow locating arms to reduce weight, and the brake discs are made of carbon-ceramic composite rather than steel. Six-piston Brembo calipers grip the front 15.4-inch discs, and four-piston calipers manage the 14.2-inch discs in the rear. The 20-inch alloy wheels are equipped with next-generation Bridgestone Potenza tires: The 9.5-inch-wide rims in the front carry 265/35 ZR tires, while the rear 11.5-inch-wide rims use the wider 305/30 ZR format.

Climbing into the otherworldly cockpit of the LFA for the first time is both pleasing and daunting. The form-fitting seats can be adjusted to make almost any driver or passenger comfortable, and there is ample legroom to accommodate even 6-foot-plus occupants wearing helmets. Yet little else is familiar. Some controls are located in unusual positions, and the thin-film transistor-instrument display requires some getting used to. The seat belts feel unusually soft and thick (the shoulder harnesses include small built-in air bags), although low-sited latches make fastening them awkward. The steering wheel is formed of aluminum, magnesium, and carbon fiber, and has a flattened lower rim to give space to the driver’s thighs. Fortunately, the steering wheel does not obstruct the driver’s view of gauges or controls.

In gear, speed increases dramatically and far more quickly than one might expect, even with so much horsepower pushing a mere 3,263 pounds. The steering, suspension, and brakes are racer-sharp and respond with uncanny immediacy to driver input. The initiated may be wary at first of taking the LFA to speed, but confidence grows quickly with the realization that the electronic stability-enhancement systems are tuned to near perfection.

A lengthy test-drive—even by an experienced driver—is still not enough time to appreciate all the LFA can do. That the car delivers close to race-ready performance levels and luxury-sedan civility is testament to the painstaking toil of the engineering team over the course of the LFA’s nine-year development. During that time, much changed. The original all-aluminum chassis, for instance, was scrapped in favor of the finished product’s lighter carbon-fiber assembly. But what remained constant was Lexus’ unwavering determination to build a supercar that was uniquely its own—and one on which the manufacturer could establish its own tradition.

Now that the Lexus engineers have overcome their hurdles, however, prospective owners of the LFA must surmount a few of their own. Lexus has announced that a mere 500 LFAs will be built for worldwide consumption during a two-year period beginning in December 2010, and approximately 100 of these were said to be spoken for at press time. The specific U.S. allocation has yet to be determined. Still, even those who do not succeed in acquiring an LFA may take heart in the knowledge that this introductory model is certain to be the first in a long line of supercars from Lexus. And judging by the extraordinarily high standards this car has set, its successors will have much to live up to.