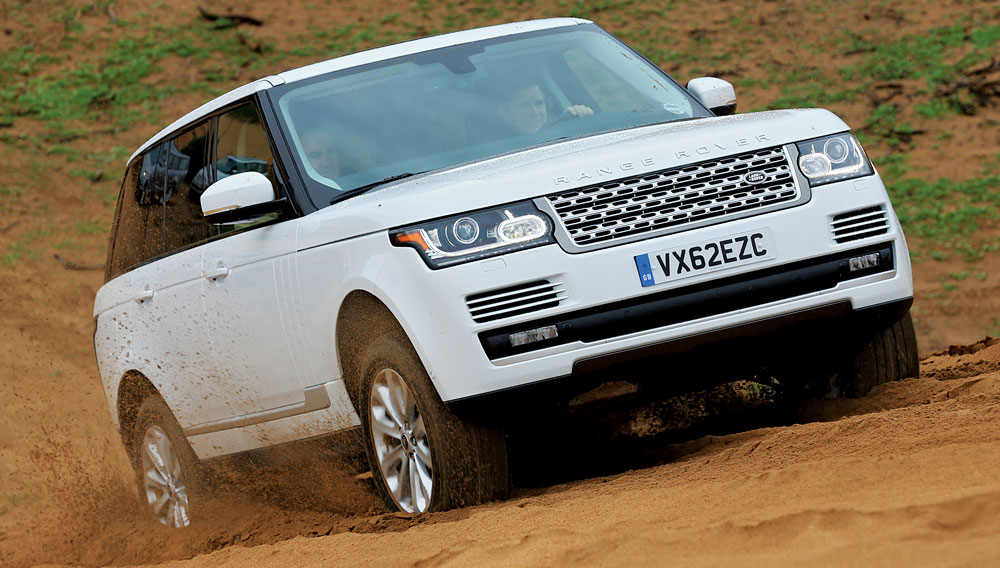 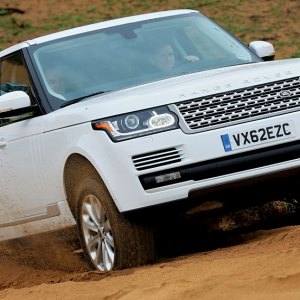 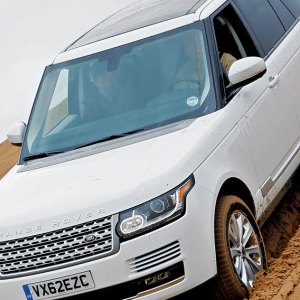 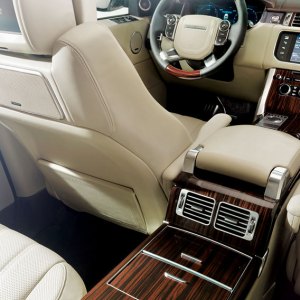 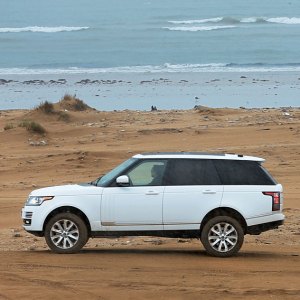 While super storm Sandy was hammering the East Coast and drenching rains were merging Venice with the Adriatic Sea last fall, similar weather was pounding Morocco into mud. Downpours of biblical ferocity slashed sideways across this sliver of North Africa. Roads and bridges in the Atlas Mountains crumbled and tumbled into gorges. Village streets around Marrakech became maroon-brown torrents, and the sands of the Western Sahara turned to goop.

This was not the time or place for a carmaker to conduct the global launch of a new luxury model. Yet here was Land Rover, which for more than 60 years has been building vehicles large and small, luxurious and utilitarian, and all capable of conquering seemingly unassailable surfaces in any weather and tugging more tonnage than a team of plow horses.

So the meteorological mayhem and Morocco’s prehistoric landscape actually formed the perfect environment for Land Rover’s debut of the 2013 Range Rover, a fourth-generation model that is lighter, lower, and quicker than last year’s version.

For two saturated days we trod more than 300 miles in the tire tracks of the prototype Range Rovers that traversed this same brutal terrain during extreme-weather testing in the late 1960s. On one of our adventures, we drove the basic 5-liter, 375 hp V-8 Range Rover. On the other sortie, we employed the supercharged 510 hp version.

We rode up hills and down dunes. We cut across beaches without knowing where the sand ended and the Atlantic began, and, with cliff walls to our right and a sheer drop to our left, we climbed 6,000 feet along mountain tracks not much wider than the SUV. The vehicles met these challenges with hardly a slip, slide, or quiver. But that was expected, because Range Rovers always have been built to remove any surprises from risky travels while keeping the driver and occupants snug and isolated from the muck outside.

“When you’re traveling through stuff like this,” Alex Heslop observed as another sodden corner loomed, “you have to be very thankful you’re doing it in a Range Rover.” His was a biased brief, given that Heslop is chief program engineer for the new vehicle. Still, it was a valid assessment of our situation.

Heslop is a key member of the Land Rover team that was tasked with overhauling the Range Rover. Build it lighter to reduce its thirst for gasoline, ordered management. Make it appear softer and less like a tea chest. And, please, improve the rear-seat legroom.

“We needed to make [the Range Rover] more relevant, more desirable,” explained Gerry McGovern, design director and chief creative officer at Land Rover. This is not to suggest that the outgoing Range Rover was unattractive or unnecessary, but, like many British motorcars, particularly the iconic ones, it was resistant to change; the third-generation model was a decade-old design.

“Now we’re creating a whole new generation of vehicles—the Evoque, the Range Rover—and they must still resonate on an emotional level,” said McGovern. “Take the design too far, and we become futuristic. Don’t take it far enough, and we are retroactive.” And wherever Land Rover takes the design, it must never, ever mess with the Range Rover’s pedigree as a multipurpose luxury transporter for, he says, “driving from and to the opera or the outback”—or for trekking across Morocco.

The new Range Rover displays sharper rakes to the windshield and grille, and it appears to be wearing eyeliner around its headlights. The rear light fixtures received the same supermodel treatment. Above the reworked tailgate is an overhang, almost a horizontal spoiler, which is similar to the Evoque’s stylish lid.

Other changes to the exterior are minor. Land Rover has retained the clamshell hood, floating roof, and grille, because they are signature elements as recognizable as the radiator slats on a Jeep. From any distance, in any light, the new vehicle looks exactly like a Range Rover.

Mechanically, however, the 2012 and 2013 editions are aeons apart. The new Range Rover is the first SUV to have an all-aluminum monocoque construction. The engine, subframes, and even the Brembo brake calipers also are made from aluminum. The weight savings is about 700 pounds or the equivalent of three large passengers traveling with boots and skis.

The weight loss has reduced the vehicle’s gasoline consumption by roughly 9 percent compared with that of the previous Range Rover and has helped raise the automobile’s combined city/highway fuel-efficiency rating to about 20 mpg. Shedding pounds also has improved the vehicle’s performance. The normally aspirated Range Rover now takes 6.5 seconds to reach 60 mph from rest, almost a second quicker than the old version, and its top speed is 130 mph. The supercharged Range Rover accelerates to 60 mph in 5.1 seconds, which is faster than the Porsche Cayenne GTS. It has a top speed of 140 mph.

The Range Rover’s engineering updates are crowned by the second-generation Terrain Response system, which adjusts the suspension setting and the ground clearance according to the road conditions (dry or wet) and road surface (gravel, snow, mud, sand, or rocks). The center console contains manual terrain-management buttons and knobs as a backup for owners who distrust technology.

A new Dynamic Response system reduces body lean and the driver or passenger head-snapping that may occur when the vehicle cavorts off-road or encounters road bumps. Moving the engine intakes from the sides of the vehicle to under the hood has increased the Range Rover’s wading height by 7.8 inches, allowing the SUV to ford streams that are nearly 3 feet deep.

Safety features include Hill Descent Control, which governs the speed when the vehicle travels down steep grades, and Hill Start Assist, a system that prevents rollbacks. The optional automatic emergency braking reduces the risk of rear-ending another car should the driver’s attention wander.

When driven briskly along Mor­occo’s N8 highway, away from the beaches and mountains and toward Marrakech, the Range Rover seemed to float less than previous models. It still wobbled a bit, but the steering tightness and precision are vastly improved. The ZF 8-speed gearbox—with paddle-shift controls and automatic mode—completes gear changes, claims Land Rover, in 200 milliseconds, or six times faster than a human heartbeat. The Range Rover also has reengineered air suspension, rotary transmission control that it shares with Jaguar, a three-person rear bench that can be replaced by a pair of reclining captain’s chairs, alloy wheels as large as 22 inches, and noticeably improved soundproofing.

The Range Rover’s interior fulfills McGovern’s wish for a design that rests comfortably between traditional and contemporary and adds about five inches of rear legroom. Most of the cabin—the seats, dashboard, door panels, and optional headliner—is lined with hides from the Bridge of Weir Leather Company. The veneers on the center console and on the doors are real wood. The dash and center console are less cluttered than those of last year’s model, because the addition of automatic systems has reduced the number of buttons and switches by about 50 percent.

Options include a sunroof that stretches nearly the length of the cabin, mood lighting, deployable running boards, a mini refrigerator built into the center console, and a 1,700-watt, 29-speaker Meridian sound system.

The basic 2013 Range Rover costs nearly $84,000. The better-equipped High Specification Edition is priced at about $89,000, and the supercharged version is listed at just under $100,000. The fully loaded Range Rover Supercharged Biography edition smashes through the six-figure price ceiling at nearly $131,000.

McGovern and Heslop spoke of a mandate that news of an upcoming new-and-improved model always seems to prompt from Ranger Rover owners: “Don’t change it. Just make it better.” Contradictory as that directive may be, Land Rover has followed it. The latest model is unmistakably a Range Rover, and it is better.