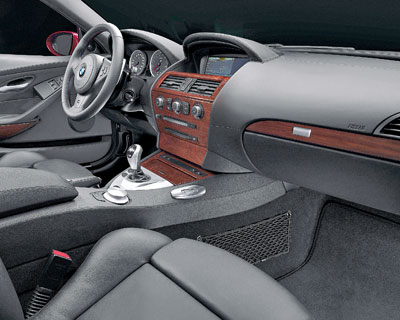 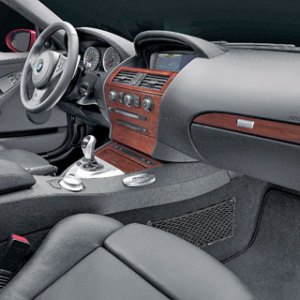 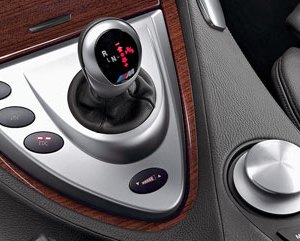 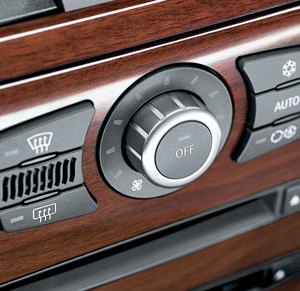 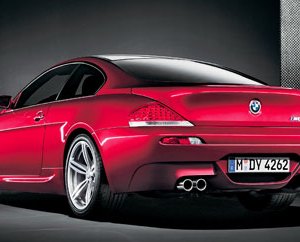 Sipping a cocktail while lounging in the Patio de Caballos at the elegant Hacienda La Boticaria Hotel near Seville, Spain, BMW board member Burkhard Goeschel gestures toward a new bronze BMW M6 parked nearby. “You can easily become addicted to this vehicle,” Goeschel says as the car crouches low over its 19-inch spoked alloy wheels, enticing admirers to abandon their drinks and take it for a long, fast drive. Eventually, we would succumb to the temptation, putting the M6 through its paces at the nearby Race Resort Ascari track, logging several hundred kilometers on scenic Spanish secondary roads, and then indeed finding ourselves craving more.

Constructed of aluminum, aluminum alloy, and carbon fiber, the M6, which will not be available in the United States until May 2006, is more than 250 pounds lighter than the new M5 sedan and, not coincidentally, 10 seconds quicker per lap on the Nürburgring race track. The M6 also will beat the new Porsche 911 Carrera S by four-tenths of a second in a zero-to-60-mph sprint, and although it is more agile than the 612 Scaglietti, it carries a price tag ($107,000) that is far less than half that of the Ferrari.

As the fastest production car that BMW has ever built, the M6 nearly matches the performance of the European exotics, but it is wrapped in a relatively discreet guise, and it offers comfortable accommodations for four (well, perhaps two adults and two children) and enough high-tech devices to intrigue a nuclear physicist.

Clever weight-saving features, such as the world’s only production carbon-fiber roof, have lowered the M6’s center of gravity dramatically and improved its power-to-weight ratio compared to the M5’s specifications. These enhancements, plus a wider track and more aggressive suspension tuning, have made this sleek two-door, according to BMW, significantly quicker than the latest M5 on Germany’s favorite test spot, the North loop of the Nürburgring. On the curvy Ascari track, where we test the M6, the car certainly proves both fast and forgiving. “The M6 is more agile and sporty than the M5,” says M6 product manager Stefan Behr. “You also have a deeper sitting position. So the M6 has a totally different feel.”

BMW’s M Sport engineers adapted key elements of their Formula One V-10 engine for the M6. And while you cannot rev this engine to an earsplitting 18,000 rpm as you can with the one in Nick Heidfeld’s FW27 BMW F/1 car, you can coax 507 hp from it. (The connection between that horsepower rating and this year’s 50th anniversary of the famed BMW 507 roadster is purely coincidental.)

The Ascari track was designed for novices, so most corners are beautifully radiused. Still, linking them together when you have had precious little time to learn the circuit might be a challenge, though not in the M6. Whether you are perfectly on line, apexing early, braking late, or completely out of shape, it does not matter. The M6’s prodigious grip puts you in command of the situation.

Leaving the pit area in a hurry, we accelerate up a small rise and then prepare for a quick left-hander that opens into a short straight before sweeping left again. Hammer the throttle and, because the wailing V-10 revs so freely and fast, the 7-speed sequential manual gearbox (SMG) shifts immediately. Acceleration is enhanced because the 7-speed has smaller gear increments than a 6-speed. The shifts are accomplished electrohydraulically by a wireless controller. The steering-wheel shift controls are so easy to use that we are able to focus fully on our entry and exit speeds for the corners, which arrive more quickly with each lap.The M6 is not equipped with BMW’s Active Steering option, electronically controlled roll bars, or run-flat tires, but it still features plenty of drive-enhancing wizardry. You can preset engine power (at 400 hp, for valet parking or economical cruising, or at the maximum 507 hp), the Dynamic Stability Control (DSC), the Electronic Damping Control (EDC), and the SMG transmission’s shift speed.

The EDC has three settings: Normal, Comfort, and Sport. The Comfort setting offers easy steering on long-distance highway drives, while the Sport mode provides perfect feedback when you are pushing this coupe through a tight corner.

The SMG’s Drivelogic has 11 different settings. The higher the setting, the faster it shifts. In Sport mode, the SMG shifts more rapidly than you can blink. To employ the Launch Control function, which limits wheel spin in abrupt starts, simply shift off the DSC, push the gear selector forward, hammer the throttle, and the electronics do the rest.

The M6 is equipped with brakes whose stopping power is worthy of a racecar. Surprisingly, the massive 374 mm and 370 mm ventilated discs (which the M6 shares with the new M5) employ twin-piston calipers all around, but because they work so well you will not speculate as to why they are not four-pot fronts.

The alloy suspension retains the standard 6 Series geometry, with a somewhat more negative camber to compensate for the M6’s improved driving dynamics and likely higher suspension loads under fast cornering. The Servotronic steering is sensitive to both the road conditions and the engine speed.

The rear end’s Variable M Differential Lock split rear-wheel traction supplies more power to the wheel with the best grip. This feature is especially helpful when you are accelerating out of a tight turn and 100 percent of the power can go to the one wheel with all of the grip. The M Dynamic Mode (BMW suggests you use this feature only on a track) is a DSC subfunction that intervenes only when the M6 is at its absolute limits, enabling you to countersteer while drifting through a bend.

The M6’s distinctly wedge-shaped profile further enhances the dramatic, angular styling theme seen most recently in the latest 3 Series. Twin, sharply drawn character lines emerge from the narrowly focused headlights and split at the A-pillar to define the racy roofline, then streak rearward to embrace the slightly raised (and aerodynamically efficient) decklid and rear diffuser. The side sills are more aggressively cut than the standard M6’s to optimize airflow along the underfloor and visually accentuate the car’s length.

The M6’s interior includes a twin-shroud dash that separates serious driving accoutrements from the navigation system and other center-stack ancillaries; deep bucket seats with electronic lumbar support; large, easy-to-read instrument dials; scads of Merino leather and aluminum; and every conceivable safety aid. You can special-order full Merino leather upholstery for the dashboard, door, and rear side panels; Madeira or Carrera wood trim; and even an Alcantara headliner.

Returning to the hotel from the Ascari circuit, we encounter long lines of slow-moving traffic, and although prudence suggests we exercise patience, we catapult the M6 past dawdlers with a rush that leaves us grinning and looking for more opportunities to repeat the thrill. When the M6 beckons you to test its limits, it is difficult to resist.