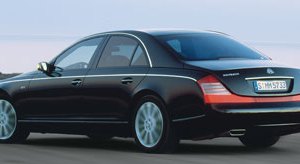 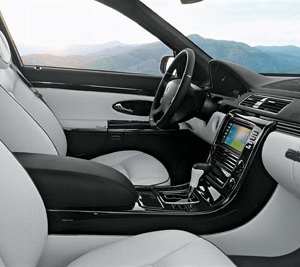 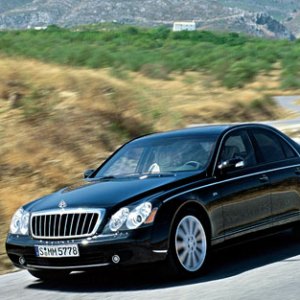 En route from Málaga to Marbella along the scenic expressway in southern Spain, I search in vain for a flight attendant call button. Finding none, I abandon the fantasy and accept that this is the backseat of a fast-moving, chauffeur-driven Maybach 62 limousine and not the first-class cabin of a Boeing 747. Better yet, with my seat reclined, my feet propped up on the footrest, and my head resting on a pillow, I could try to imagine myself flying at top speed on a magic La-Z-Boy recliner—anything to distract me from considering the speed at which we are traveling.

Resigned to the reality of my surroundings, however, I fiddle with the controls for the transparent roof and flip through the stations on the satellite television. Then I refill my sterling silver goblet with chilled sparkling wine from the mini-fridge. It might help to suppress the vulnerability that arises when you are the passenger and someone else is driving the car faster than 120 mph.

For reasons that now are obvious to me, most car buyers prefer to pilot themselves. This includes Maybach owners, and so their ride of choice is the 57, which is a half meter shorter than the 62, a vehicle that is best enjoyed from the backseat—when driven at a velocity that does not transform the scenery into a blur. The 57’s list of luxury amenities also is shorter than that of its super-deluxe extended-wheelbase sibling. However, the 57 now offers an option that might never occur to a stretch-62 passenger: more power.

The car’s standard 5.5-liter twin-turbocharged engine never seemed to be lacking, but more power is certainly, well, more, and with Maybach, the more the merrier. The new 57 S (the appended letter signifies “Special” in Maybach taxonomy) has a 6-liter biturbo V-12 engine that

a solitary engineer assembles at AMG’s motor-making facility in Affalterbach, Germany. It also comes with two “57 S” badges on the front fenders and one on the rear, in case anyone should miss the car’s more subtle visual distinctions.

But the term special does not adequately describe the sensation of driving a 6,030-pound machine from rest to 62 mph in 5 seconds. Surreal does. Generating as much as 604 hp, the 365 cu in engine makes quick work of motivating the three-ton car to freeway speeds. The power crests at just above 5,000 rpm, but peak torque—that brute force that pushes passengers back into their electronic massaging chairs—is available anywhere from 2,000 to 4,000 rpm, a plateau that seems as broad as the Maybach’s 6.5-foot width. Incredibly, the 738 ft lbs of torque limit is artificially restricted, which no doubt prevents forces that would tear the 5-speed automatic transmission into shrapnel.

Such prodigious midrange torque gives the 57 S an exceptional ability to maneuver through highway traffic; the manufacturer claims that only 3.7 seconds separate 50 mph from 75 mph. In testing that claim, I overtake five cars, safely and efficiently, with one liberal application of the throttle. Prudence dictates that I accept as true Maybach’s pronouncement of a 171 mph top speed; mountainous roads are straight for only short distances, I discover while rocketing a 57 S from the Marbella Club Hotel on Spain’s Costa del Sol into the hills surrounding the Ascari Race Resort. Unfortunately, we visit Ascari only to view the Maybach folks themselves demonstrating the car’s capabilities, not to form our own driving impressions.

Nevertheless, the show is compelling. Watching a 57 S tear down the front straight of a racetrack is much like witnessing a rhino charge. The biggest surprise is not the burst of acceleration, but the composed manner in which the car moves laterally. It rolls, yes, and its tires scream, but the 57 S differentiates itself from other gargantuan sedans—the Rolls-Royce Phantom and the Bentley Arnage, for example—with ride and handling traits that maximize its efficacy.

Deceptively quick, the 57 S also is astonishingly maneuverable—body roll has been reduced some 15 percent compared to the standard 57—because of its sport suspension and larger-diameter front and rear stabilizer bars. Riding half an inch closer to the ground also lowers the car’s center of gravity. You can adjust the suspension to one of three stiffness settings (normal, firmer, and firmer still) to help straighten the bends in the road.

The new 20-inch, 11-spoke wheels, another S exclusive, are shod in Michelin Pilot Sport high-performance tires composed of a harder rubber compound on their outside shoulders and softer material in the central treads. Think of them as big, black jelly doughnuts. The “variable contact patches” (as Michelin calls them) of these 275/45 tires conform to the road so that as the 57 S carves into a corner, they increase their grip. Toss the car into a hairpin turn, and the tires will grab the road more tenaciously than your fingers will clutch that leather-clad steering wheel.

The leather, incidentally, requires at least five hours of manual labor to stitch into place. You can order the rest of the interior in any of 4 million combinations of colors, options, and accessories. One possible treatment would include black piping on white leather seats, piano-black lacquer on interior moldings, and carbon-fiber trim. If carbon fiber appears out of place in a luxury sedan, you can substitute black poplar. Gold trim also is available.

The exterior is available in any color you want—this is a true luxury car, after all—but monotone silver or monotone black paint schemes are exclusive to the 57 S. Neither, however, has the slimming effect you might expect. Maybach has modified the front end slightly from the 57 design, adding chrome around the fog lights, restyling the valance below the rear bumper, and reshaping the twin exhaust pipes so that they now are trapezoids.

“The customer is king,” says Maybach spokesman Stefan Diehl, “and sometimes, the king is customer.” Diehl is referring to the company’s willingness to customize its cars and to the fact that it has sold several to royalty. But monarchs are not a thriving customer base; Maybach Manufaktur sold just 600 automobiles last year. So rather than wait for a population explosion of royal families, Maybach, in an attempt to increase sales, is offering more power to the commoners, those who can afford the $367,000 price of the 57 S. The price exceeds the combined costs of a Mercedes-Benz S65 and an SL65 AMG, both of which share the same engine as the Maybach. Still, as Diehl notes, acquiring a Maybach is more akin to purchasing a yacht or a plane than it is to buying a car. He has a point: With a Maybach 57 S, you do, sort of, have all three in one.

In the early decades of the last century, if an engine manufacturer wanted to draw attention to its superior technology, it would put its engines in the air. Rolls-Royce, BMW, and Maybach were among the companies that did so. Soon after leaving Gottlieb Daimler in 1907 to start his own aircraft engine business, Wilhelm Maybach received a commission from Count Ferdinand von Zeppelin to design and build lightweight, powerful gasoline engines for his airships.

Upon Maybach’s retirement in 1914, his son, Karl, assumed control of the family firm and continued to construct aircraft engines but also began building auto engines. Such diversification proved prudent; after World War I, the Treaty of Versailles, for a time, prohibited German companies from building aircraft engines.Germany’s Zeppelin company, to avoid dismantlement as a result of the Versailles treaty, furnished the ZR III dirigible to the United States as a war reparation. Powered by several Maybach engines, the ZR III made its transatlantic flight in 1923. By 1928, Maybach engines were powering all 112 airships built by Zeppelin. In 1929, the Graf Zeppelin, propelled by five of Maybach’s 570 hp V-12s, circumnavigated the globe. Two years later, it crossed the North Pole.

The same year that the Graf Zeppelin flew around the world, Karl Maybach introduced the Type 12, which a company brochure dubbed “the first ever volume-produced 12-cylinder engine.” Debuting in the Maybach 12 automobile, the engine offered power and reliability, two hallmarks of 12-cylinders. The alternator, distributor, and water pump were located between the cylinders, making them easily accessible for maintenance. With the car traveling at 36 mph, the Type 12 engine operated at an effortless 1,425 rpm, resulting in minimal stress and smooth operation.

In 1930, Maybach installed the first standard-production V-12 engine in a passenger car, which it named the Zeppelin. Soon the company was building engines for buses, locomotives, and military half-tracks.

The Maybach automobile business operated as an independent entity until it merged with Daimler-Benz in 1960, the year of Karl Maybach’s death. Today, DaimlerChrysler routinely shoehorns 12-cylinder engines into its largest cars, those that bear the Maybach name.