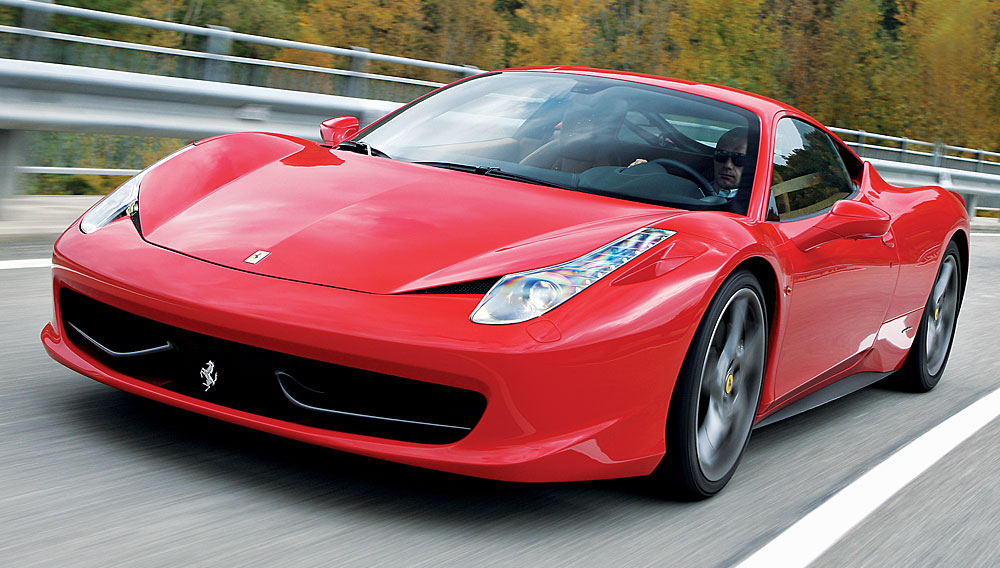 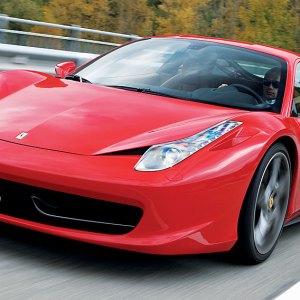 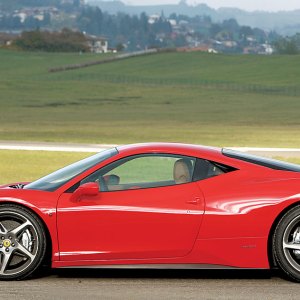 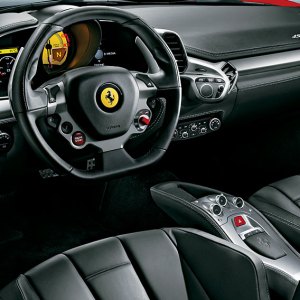 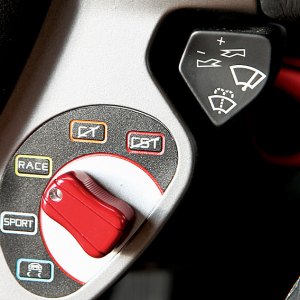 Nothing really was wrong with the F430. If Ferrari only had tinkered with its V-8 two-seater for the next few years—maybe adding a couple horsepower or creating a Wolfgang von Trips special edition—no one would have complained. And yet, here we are with the 458 Italia, the F430’s thoroughly overhauled, thoroughly over-the-top replacement, which, by trumping its predecessor, has reinforced our faith in Ferrari and in humanity’s capacity for technological progress.

Maybe I am indulging in hyperbole, but the 458 inspires such a reaction, regardless of how many exotic cars you have read about, driven, or owned. This roughly $225,000 coupe will reduce you to giggles the first time you nail a full-throttle upshift at 9,000 rpm, and then again when you discover how hard it sticks in the corners, and once more when you jab the standard carbon-ceramic brakes and realize that the seat belt is the only thing keeping you from pitching into the windshield like a crash-test dummy.

You have to wait a few minutes, though, before exploring the 458’s performance envelope. Tire and engine graphics on the left side of the LCD instrument panel indicate the car’s readiness for acceleration. After you press the start button, the tire and engine icons appear blue initially, reminding you to take it easy. As temperatures rise, the graphics turn green, signaling that the car is ready to pick up the pace. (They turn red when the systems are overheating.)

I am awaiting the green flag as I drive through the gates of the Ferrari factory in the town of Maranello, in a region of Italy laced with anonymous spectacular roads that would be famous if they were in the United States. I drive for nearly a mile before I remember to put the dual-clutch transmission in manual mode. This lapse never would have happened with one of Ferrari’s old single-clutch gearboxes, which worked wonderfully when operated manually, especially by an angry driver, but lurched sullenly through their duties when choosing gears for themselves.

Regarding those F1 transmissions, Ferrari used to make a point of noting their shift times—the acceleration gaps between gears—and how the company’s engineers had wrangled them down to 100 milliseconds, then 60 milliseconds. The 458’s shift time is zero, or at least it seems to be. With the dual clutch providing an overlap, the car suffers no acceleration gap between gears. So on this one technical front, Ferrari might have run out of room for improvement.

The transmission’s instant responses are a perfect match for the new direct-injection 4.5-liter V-8. Like its predecessor, the 458 has a flat-crank engine that sounds nothing like a traditional V-8 and a lot like a pack of bullet bikes racing through the Sydney Opera House. Ferrari built a number of tricks into this engine, including a high-speed ram-air horsepower boost (of five horses, according to Ferrari) and vacuum pumps in the crankcase that ensure proper oil circulation, especially at high rpm. The fact that this 558 hp V-8 is naturally aspirated makes you wonder what kind of madness Ferrari will concoct once it resumes playing with turbochargers.

Most engines reach their peak horsepower and then, some time later, their redline. The 458’s horsepower peak arrives at the redline, a glorious 9,000 rpm. I suspect this feature has implications for the inevitable 458 Scuderia Schumacher GTO Evoluzione; if the power curve continues climbing at 9,000 rpm, how much power might the engine generate at 9,500 rpm? Or 10,000?

The 458’s engine is free revving, and its seven speeds are closely spaced. Together these two features enable you to upshift quickly through the lower gears and enhance your sense of speed. Similarly, when you tear into a tight corner, the screaming throttle blips conspire with the transmission’s rapid-fire downshifts to heighten the Formula 1 illusion.

Like the F430, the 458 offers various levels of electronic assistance in corners, and the driver can select them via the manettino dial on the steering wheel. Supremely confident maniacs can deactivate all electronic safety nets by turning the dial to CTS Off. I am not brave enough to do that; the 458’s limits are so high that when you approach them, the action unfolds very quickly. Race mode raises the stability-control intervention threshold and metes out perfect amounts of throttle on corner exits. Sport mode might be the best setting for public roads or casual track days, because the electronic traction and stability controls intervene sooner than they do in the other modes. The CT Off mode disengages the traction control but retains the stability control, enabling you to exit slow corners with the tail out, confident that you still have one last electronic safety net ready to catch you.

The last time I was on the roads of Maranello I was behind the wheel of a 430 Scuderia, and compared with that car’s steering, the 458’s seems quicker. Even when navigating the tightest switchbacks, I do not have to move my hands on the steering wheel; my arms would not cross unless I ripped a bootleg turn. It turns out that, according to Ferrari, the 458’s steering ratio is 30 percent smaller than that of the F430, which itself is hardly a Buick LeSabre.

As with the 430 Scuderia, you can adjust the suspension independent of the almighty manettino—meaning you can sharpen the throttle, differential, and stability control and still select a relatively compliant ride. When you are driving aggressively on a road where an unexpected mid-corner bump might pitch an overly stiff car into a ditch, this feature becomes especially valuable. Also, it allows you to set the car in Race mode and enjoy the screaming of the exhaust without feeling every pebble under the tires.

Styling may be subjective, but only a black-hearted grinch would be left cold by the 458’s lines. The car’s shape also is supremely functional, generating downforce along with a low drag coefficient. As it did with the engine, Ferrari obsessed over design details. The rear edges of the front fenders, for example, are sculpted so that airflow remains close to the car’s body. After a few hours of hard driving, I find evidence that the fender design is doing its job: brake dust in the doorsills.

The most noticeable difference between the interiors of the F430 and the 458 (besides the addition of a satellite navigation display on the right side of the instrument panel) is the absence of column stalks in the latter. Ferrari moved all of the controls—for the wipers, turn signals, headlights—onto the steering wheel. The new configuration gives the 458 more of a Formula 1 feel; still, you do not intuitively push a button when you want to signal a turn.

But when a writer laments a car’s turn signals, clearly he has found little to criticize. This is true with the 458. However, early production models did have one noteworthy flaw: They tended to catch fire. Ferrari discovered that the glue bonding the heat shields near the exhaust was flammable and corrected the problem by issuing a recall and refastening the shields with rivets.

We have become accustomed to Ferrari one-upping itself with each successive generation of its mid-engine V-8 supercars: The F355 evolved into the F360, which begot the F430. But with the 458 Italia, it seems as if the company has skipped a generation, as though there is a missing link between this latest iteration and the F430. Five years from now, the 458 still will feel fresh, which makes you wonder how Ferrari will top it. It is a good bet, however, that someone in Maranello already is working on the car’s successor.