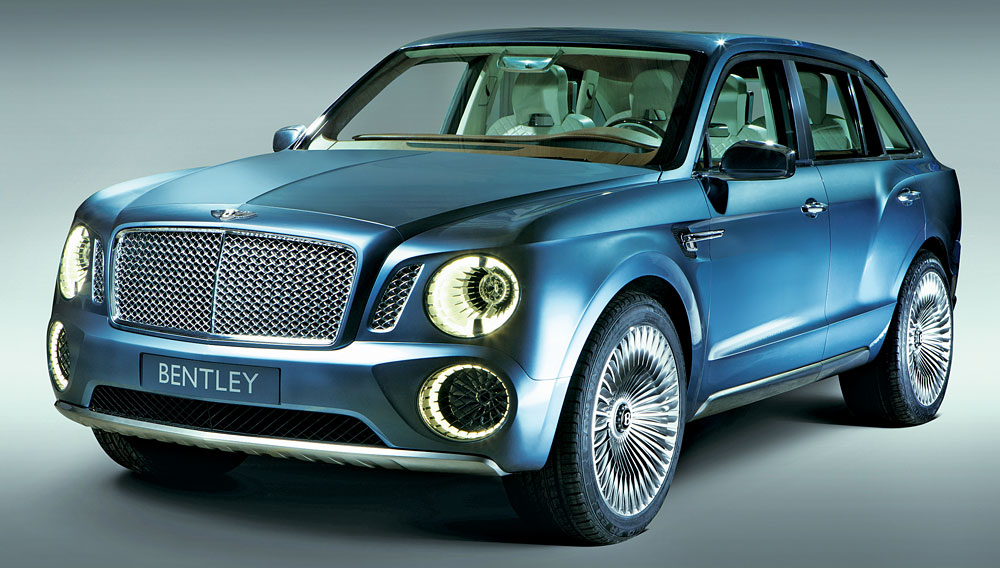 When he is working on a new product, Wolfgang Dürheimer, the tailored, urbane 53-year-old chairman of the Bentley and Bugatti brands, likes to develop a story around it. In the case of Bentley’s SUV concept, the story behind one of the vehicle’s prospective names began last year, when Dürheimer was introduced to the sport of falconry during a visit to England’s Peckforton Castle, a 19th-century country house–cum-hotel. There he met a perlin falcon named Lola, an elegant conqueror bred to survive effortlessly in the grand outdoors. “I read up on the genesis of the perlin,” Dürheimer said at the Geneva International Motor Show in March, following the unveiling of the SUV’s prototype, “and found it to be the perfect cross between a peregrine, the world’s most powerful bird, and the merlin, the world’s fastest, most agile, tightest-turning falcon.”

Dürheimer, who was scheduled to leave his Bentley and Bugatti posts on September 1 and become head of research and development at corporate cousin Audi, said he recognized that these same qualities—power, speed, agility—belonged to the rolling, working prototype of the company’s purposeful, gracious, and very fast EXP 9 F sport-utility vehicle concept. Thus in March, after he drove the prototype onto the motor-show stage, blipping its 600 hp, biturbo W-12 into a bellow, he dubbed this luxury off-roader the Bentley Falcon. The name is only temporary, but Dürheimer was lobbying hard with parent company Volkswagen to make it permanent if the EXP 9 F goes into production.

The smart euros are on Volkswagen giving a green light to the SUV this year and beginning production by 2016. In its present form, the vehicle rests on a Porsche Cayenne platform—Dürheimer is the former head of research and development at Porsche and the father of the Cayenne—but it has a front that is flat, high, handsome, and unmistakably Bentley. The grille is rudimentary, a simple mesh prow that has been worn by most members of the brand since the Bentley Boys’ Blowers of the 1930s. The EXP 9 F stands tall on 23-inch wheels with too many spokes. It looks heavy yet perfectly proportioned, wearing its broad-shouldered width better than Tom Selleck wears his.

As Bentley wrestles with the weight, size, gasoline appetite, and environmental correctness of its supersized vehicles, the company might eventually offer a plug-in hybrid version of the EXP 9 F. But Dürheimer said he expects the initial version of the EXP 9 F will be powered by the same 6-liter, twin-turbo, 12-cylinder engine used for the Continental GT and Flying Spur and for the EXP 9 F prototype. “We will be the first to use a 12-cylinder petrol engine in a luxury SUV,” Dürheimer said. “I like this idea. We will be the fastest, the most luxurious, the most exclusive. It makes clear whose car is the boss.”

As the Cayenne did for Porsche, the EXP 9 F will expand Bentley’s lineup, currently restricted to the Mulsanne and Continental variants, and, said Dürheimer, “move us closer to the mainstream.” He contended that nearly all Bentley owners also drive luxury SUVs, predominantly Cayennes, Range Rovers, and Audi Q7s. “But nobody has given those owners the chance to upgrade,” he said. “We will.”

The company’s markets have expanded into Russia and the Middle East, and India is next. Last year Bentley sold more cars in China than in Great Britain. The combination of a growing customer base for the brand and the popularity of SUVs has led Dürheimer to believe that annual sales of 3,500 units is a reasonable target. And with Bentley’s numbers in the black last year for the first time since the dire months of 2008, now seems like a good time to invest in a new product.

But just as Porsche purists were wary of the Cayenne, Bentley devotees—particularly those who own Mulsannes—might argue that the company should confine itself to big, excessive brutes and not engage in a popularity contest with Land Rover. Dürheimer said he understands such concerns. “They [the Bentley traditionalists] will always remain, and we need to still take care of everyone and not forget those who have been loyal to us in the past. But nothing is as consistent as change, and a car company, if it doesn’t want to die out, had better be prepared to change.”

Other luxury-car brands seem to be making similar changes. At the Geneva show, Jaguar announced a shooting-brake version of the XF0. Maserati is working with Jeep on the Kubang, a Ferrari-engined SUV built on a Grand Cherokee platform. Even Lamborghini, creator of raging extremes, has plans for an SUV. It presumably will be based on the Q7 from Audi and equipped with a 600 hp engine, which means it could be as powerful as the Bentley SUV.

The EXP 9 F was styled by Belgium-born, London-schooled Dirk van Braeckel, Bentley’s director of design. On the stage at Geneva, he walked around his new offspring, pointing and touching. “I designed this car to be driven from a command-seating position,” he said, “so that when inside you can still see all four corners. And you have to have space, good sideways vision, and much headroom for when bouncing around off-road.”

A Bentley interior is always a statement of unapologetic yet refined excess. The attention to details and the examples of ingenuity are startling. The prototype’s details and ingenuity include a trio of roof-mounted grab handles located in the center of the cabin, so that the driver’s sight lines are not blocked by a passenger’s Harris Tweed–cloaked left forearm and elbow when the vehicle is lurching off-road. The saddle-leather floor mats accommodate muddy boots, but when the driving is finished and it is time for a Martin Miller’s and Schweppes—with the gin chilled in a cooling compartment under the center rear armrest—the reversible mats can be flipped over to reveal a hand-knotted silk carpet.

“The aim with the car is to create a pinnacle sport-utility vehicle, and I think we have created a good basis to continue,” van Braeckel said. “It will not be the best off-road, because that is not our aim. But it will be capable off-road.”

The title of the grabbiest and most aristocratic and patently luxurious off-roader has traditionally belonged to Range Rover. Britain’s royal family has several garages stuffed with them. In 2002, whisperings had it that on royal occasions, Queen Elizabeth, to be fair to other UK car builders, wanted to ride in something other than an old Rolls-Royce. Bentley and van Braeckel took the hint. They designed and built the Bentley State Limousine and presented the burgundy whale to the queen as a Golden Jubilee gift.

Could the Bentley EXP 9 F depose the Range Rover as a favorite at court? Bentley seemingly has included every little luxury and creature comfort, from the aforementioned beverage cooler and a picnic basket to a reinforced tailgate that can hold Will and Kate while they watch Harry play polo.

“Interesting thought,” replied Bentley product-management head Paul Jones when asked about the possibility of a Bentley State SUV. “And we certainly do like a challenge.”

A Home Run for the Mulsanne

For the Continental GT, V-8 Is Enough