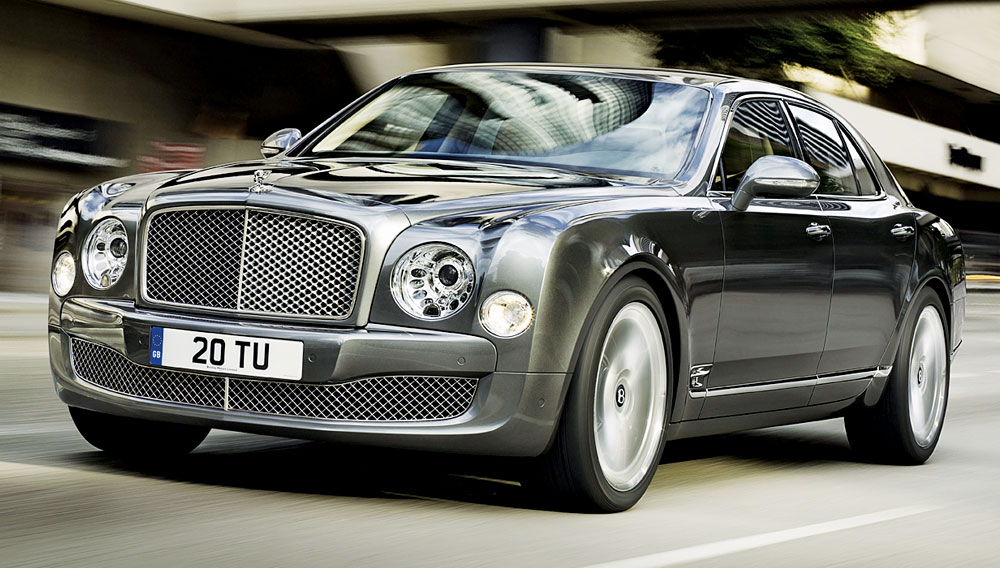 No doubt most Bentley EXP 9 F SUVs will see more soccer fields than sand dunes. But Bentley buyers might not need a family-vehicle option if they already own a Mulsanne. Opulent as it is, the big sedan proved quite capable of handling domestic duties during a recent week of test-driving that included transporting our newborn son from hospital to home. What better way to safeguard a 7-pound, 13-ounce bundle of vulnerability than by nestling him inside the Mulsanne’s three tons of leather, lacquer, and chrome?

The Mulsanne is elegant and powerful, delivering a staggering 752 ft lbs of torque at only 1,750 rpm. But it is also exceptionally spacious (a 128.6-inch wheelbase and a 75.8-inch width) and safe, equipped with a full array of air bags and anticollision sensors as well as child-seat anchors and rear-door child-safety locks.

Though the Mulsanne is as big as a Chevy Suburban and as sturdy as a tank, Bentley does not bill the $296,000 sedan as a family car, the way Ferrari touts its four-seat FF, a vehicle with a $302,450 price tag and a 651 hp engine. Maybe this is because the designation would evoke images of grape-juice stains in the Mulsanne’s ankle-deep pile carpeting and Cheerios stuck to or wedged into its leather upholstery—which, Bentley notes, has been sourced from herds living in cooler climates where there are fewer insects to bite and blemish the hides.

The Mulsanne does not have some of the FF’s family-friendly features, such as a hatchback that makes loading groceries easier. But the trunk held all of the baby gear that came home from the hospital, plus a bouquet of flowers and an overnight bag. And our son did not seem to mind the front-seat headrests’ absence of rear-facing video screens, an FF feature that can pacify young passengers. Then again, I am told that a newborn cannot see beyond a foot.

Before we reached our destination, our boy issued what for him was the ultimate endorsement of the Mulsanne. Ensconced in the rear recesses of the luscious cabin, surrounded by double-glazed glass and obsessively engineered sound insulation, he succumbed to a deep sleep.