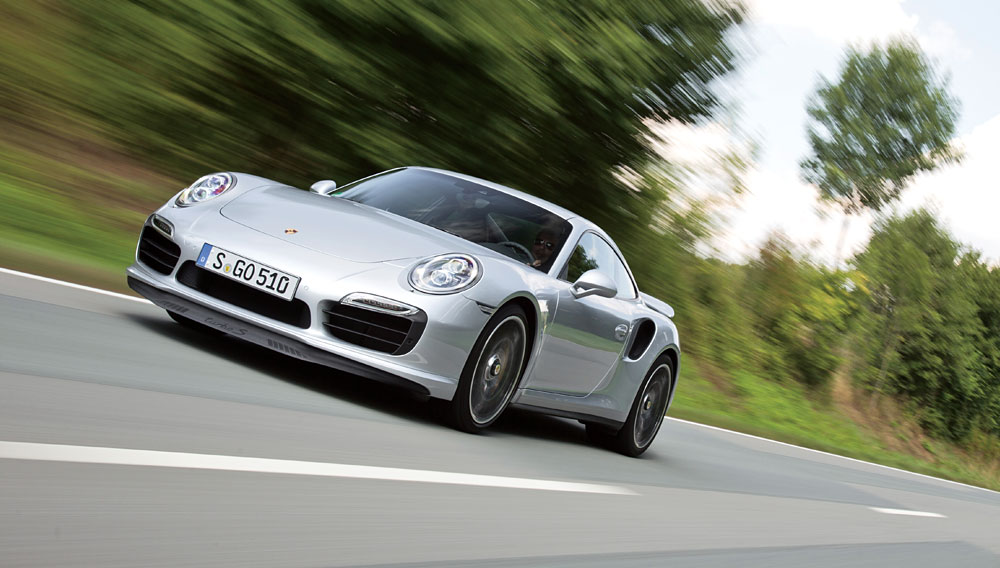 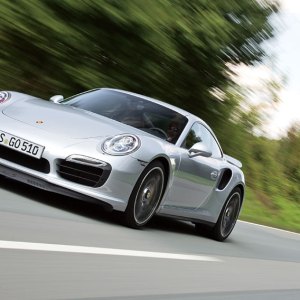 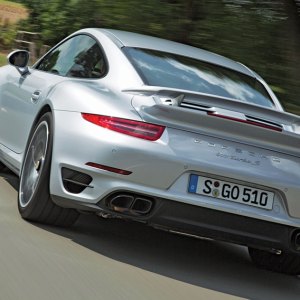 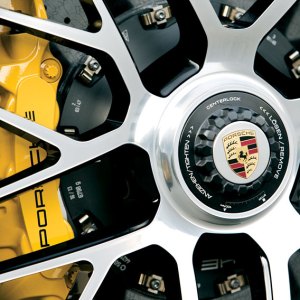 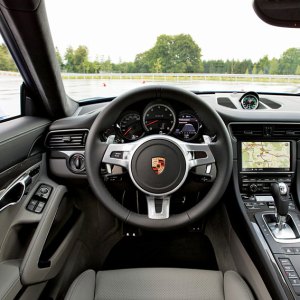 From the beginning, nearly 40 years ago—when Porsche introduced the first turbocharged production 911 at the 1974 Paris Motor Show—the Turbo model has emphasized raw, unadulterated power. The engine of the first 911 Turbo, also known as the 930, produced 260 hp, enabling the car to reach a top speed of 150 mph. The Turbos that followed were generally Porsche’s fastest models but also the trickiest-handling ones. Over time the Turbo has evolved into a high-tech wonder that sufficiently harnesses its massive power to eliminate the white-knuckle drama associated with earlier generations. But it still offers a thrilling driving experience.

The 2014 911 Turbo is powered by a 3.8-liter flat six fitted with twin turbos. The standard model produces 520 hp, 20 more than its predecessor. The Turbo S produces 560 hp. The torque rating is 487 ft lbs for the standard Turbo and 516 ft lbs for the S. The optional sport package increases the torque to 524 ft lbs and 553 ft lbs, respectively. In each model, Porsche pairs the engine with a 7-speed PDK dual-wet-clutch, sequential-shift transmission; the Turbo is not offered with a manual transmission. The standard Turbo has a base price of $148,300, and the Turbo S starts at $181,100.

Like the previous 911 Turbo, this one features all-wheel drive, though Porsche has revised the system to include electrohydraulic control of the center coupling, which makes the torque transfer between the front and rear axles more responsive. Consequently, the base Turbo accelerates from zero to 62 mph in 3.2 seconds, which is a tenth of a second quicker than the last Turbo S model. The new Turbo S reaches 62 mph in 3.1 seconds. Top speed is limited to 196 mph for the Turbo and 198 mph for the Turbo S.

The 911 Turbo looks as powerful and as fast as it is. Two large openings capped by LED lights flank the center intake and provide cooling for the front brakes. Additional LED running lights in the headlamp bezel distinguish the Turbo S from the base Turbo. Wide haunches with large side scoops set the Turbo (and Turbo S) apart from the standard slab-sided 911 and the wider Carrera 4. The rear fenders are much more pronounced, giving the Turbo a sweeping shape similar to the Cayman’s.

The 911 Turbo features a retractable rear wing that is part of a new aerodynamic package designed to keep the car glued to the pavement. The package also includes a retractable front spoiler, which is actually an air bladder divided into three sections. It remains tucked away when the car travels at slow speeds (and when it approaches steep driveways and parking curbs).

It seems as if no detail is too small for Porsche engineers. They have equipped the Turbo S model with dynamic engine mounts similar to the magnetic-fluid shocks that stiffen the bushings when the car is driven hard or is in Sport or Sport Plus mode.

The active rear-axle steering feature makes the car even more nimble. The system employs two electromechanical actuators that turn the rear wheels slightly in the opposite direction of the front wheels when the car is traveling slowly. This adjustment reduces the car’s turning radius. At faster speeds, the servos turn the rear wheels slightly in the same direction as the front wheels, enabling the car to handle as though it had a shorter wheelbase. This is a significant feature, because the new 911 Turbo, measuring 177.4 inches, is about 3 inches longer than the previous version, and its wheelbase, at 96.5 inches, has grown by about 4 inches.

The larger dimensions translate to a roomier 2+2 cabin. The standard Turbo is fitted with 14-way electronically adjustable sport seats, and the Turbo S has bucket seats with 18 settings. The instrument layout is similar to the 911 Carrera’s, though the Turbo models have black dials with aluminum trim rings. A 4.6-inch high-resolution display to the right of the center-mounted tachometer provides additional performance data.

The interior is snug yet comfortable. The controls are easy to use, and the center console is angled upward, keeping the shifter close at hand for drivers who prefer to use that lever instead of the paddles to toggle between gears.

The 911 Turbo has a launch-control system that is easy to operate: You put your left foot on the brake pedal and floor the accelerator; the launch-control light on the steering wheel flashes when the engine reaches optimum revs; you remove your foot from the brake; and the car takes off, with the transmission automatically clicking off shifts. A 911 Turbo driver should have no trouble getting the drop on a Nissan GTR.

With its massive power and a curb weight of just over 3,500 pounds, the 911 Turbo is well suited to track-day outings. Thus for test-drives, Porsche brought writers to the Bilster Berg Drive Resort, which opened in June in the German town of Bad Driburg. The resort’s 2.6-mile track was designed by Hermann Tilke, who designed nine of the 20 tracks that were used for the 2013 Formula 1 season. With its blind curves, steep elevation changes, and two high-speed straights, the new circuit proved a good test for the 911 Turbo’s technology—from the Porsche Dynamic Chassis Control (PDCC) system, which reduces body roll, to the carbon-ceramic brakes, which provide ample, fade-free stopping power.

The PDCC, traction control, and 20-inch wheels shod with 245/35 front and 305/30 rear tires enabled the Turbo to handle the g forces in the tight corners. Even as the driver’s familiarity with the track grew and speeds increased, the car never lost its composure. The rear wheels working in concert with the front mitigate the yaw at turn-ins, creating the sensation that the car is gliding through curves.

While the 911 Turbo is adept on the track, it truly shines as a high-speed GT out on the open road. The combination of the PDK and the engine’s flexibility make it a comfortable and swift road-tripper. On Germany’s autobahn, it felt stable and firmly planted to the pavement, even at speeds approaching 150 mph.

The longer wheelbase gives the car a supple ride without sacrificing stability in high-speed cornering. Most impressive is the responsiveness of the engine—no lag before it spools up. The car’s speed builds exponentially, and a pull on the paddle to summon a downshift is greeted with a satisfying bark from the exhaust.

The 911 Turbo is a technological tour de force. It is far more powerful than its forebears but not nearly as challenging or intimidating to drive. Still, this car is not intended for the faint of heart.