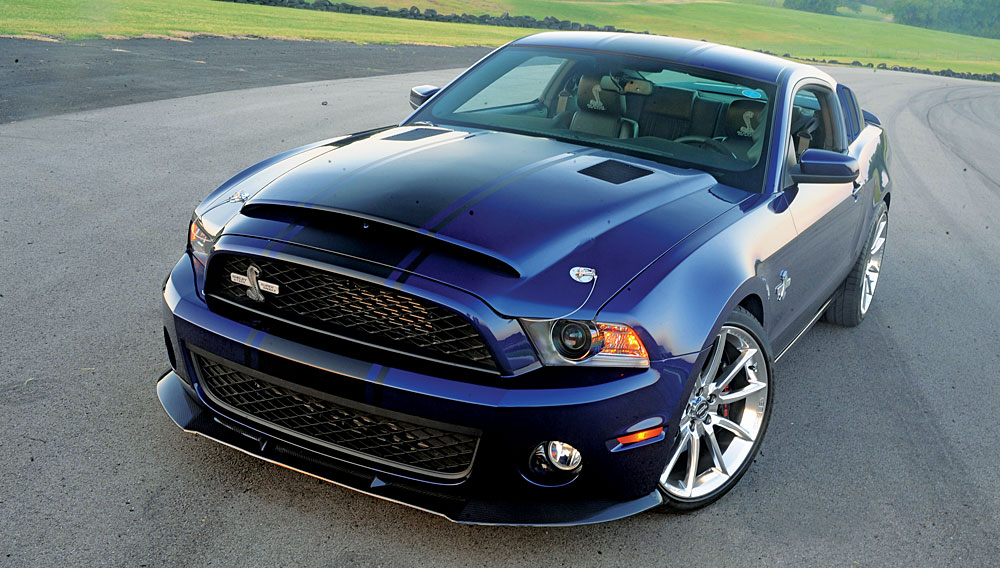 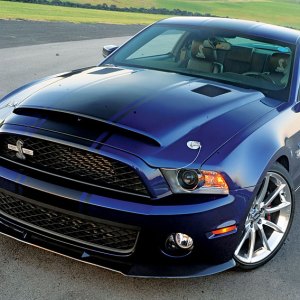 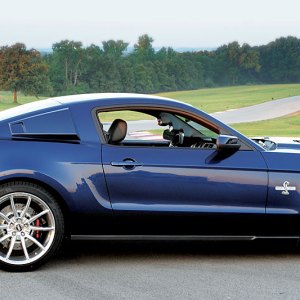 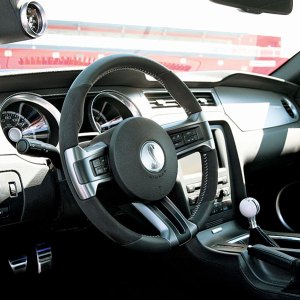 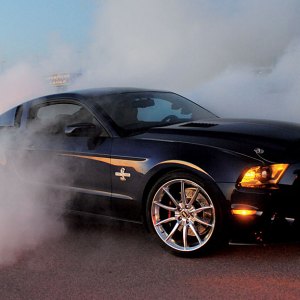 Ask a car enthusiast to name an automotive make and model that has endured in the spirit of its original design, and most would name the Porsche 911 as one car that forever altered the sports-car landscape—and the fortunes of its German manufacturer—when it went on sale in late 1964. Yet that same year, Ford Motor Company unveiled the Mustang, which became an overnight sensation—a perennially popular car that has been a household name for 45 years.

The Mustang began life as a souped-up Ford Falcon, but immediately became something much more formidable, thanks to Ford’s partner in performance, Carroll Shelby. When asked to turn the 1965 Mustang 2+2 into a competitive road racer, Shelby quickly obliged with the Shelby GT350, which featured enhancements in the engine, suspension, brakes, and interior. This bare-bones racer dominated SCCA B-Production racing in 1965; however, in 1967, changes in the Mustang line—Ford began to focus on bigger cars, more powerful engines, and greater comfort—forced Shelby to revise his formula. He designed the iconic Shelby GT500, which has been reincarnated in the 2010 Ford Shelby GT500 Super Snake.

Even a stock 2010 Ford Mustang will surprise detractors whose last Mustang ride was a few short years ago. While sophisticates may bemoan its live rear axle, drivers who like to drive will take the reins and have galloping good fun with one of the most authentic cars in today’s well-engineered Ford lineup. Since 2007, the top model in the Mustang range has been the Ford Shelby GT500, a Flat Rock, Mich.–built version that boasts power and suspension upgrades under special bodywork to distinguish it from other Mustangs in the herd.

For performance diehards, though, enough just is not enough, and once again, Shelby has taken up where Ford leaves off. Like the original Shelby Mustangs from 1965 through 1970, today’s Shelby Mustangs carry a Ford VIN with a Shelby serial number. The Super Snake is offered by Shelby Automobiles as a post-title package—priced from about $30,000—to GT500 owners who send their cars to the Shelby Automobiles headquarters in Las Vegas, or to any of the Shelby Mod Shops around the country. There, a respectable but rowdy stock Shelby is transformed into something altogether more serious.

This “serious” transformation begins by modifying the heart of the Shelby. At a time when 500 hp is standard fare for hard-core performance contenders, the stock GT500 already delivers an impressive 540 hp and 510 ft lbs of torque from its 5.4-liter, supercharged V-8 engine. Shelby Automobiles’ Super Snake snubs such dainty specifications by offering two engine-enhancement options. The more discreet of the two delivers a “mere” 630 hp and 590 ft lbs of torque by bolting on a Ford Racing supercharger. Gluttons for horsepower will check the 750 hp option, which twists out 719 ft lbs of torque at 4,200 rpm. Custom billet aluminum bits and pieces adorn the engine topside. Induction is improved with a cold-air intake system, and a Shelby performance-cooling package ensures moderate engine temperatures. Relieving the 750 horses is a cat-back exhaust system fabricated by Borla. The 6-speed manual transmission is a no-nonsense gearbox that does its job without fanfare, though shifts are balkier than ideal. Like the fruit fly’s life, first gear is brief and seemingly useless, so quickly does it pass. Shelby converts the rear axle to a 3.73:1 ratio, spinning a custom driveshaft that is engineered to withstand the extra power and torque. Overall, the car delivers a balanced combination of acceleration and top end.

Unlike big-block Shelby Mustangs from the early years, this new machine offers handling, braking, and amenities that complement its prodigious power. Shelby/Eibach adjustable coil-over suspension and sway bars are not racetrack stiff but let good drivers exploit the Super Snake’s potential to the point where bad judgment subsumes reason.

Twenty-inch Pirelli tires and richly polished 10-spoke Alcoa aluminum rims are a great wheel combination that is neither harsh nor compromising. Predictably, stopping power is quick and sure, commensurate with acceleration and handling. Shelby has hung a quartet of six-piston Shelby/Baer calipers—one at each corner of the car—on large, vented rotors.

At just under 4,000 pounds—about 30 pounds heavier than its progenitor—the Snake is no lightweight, but is subjectively lighter than other Detroit iron, with the exception of Chevrolet’s Corvette. Instead of the big, plowing, front-heavy Mustangs of Ford’s salad days, the Super Snake is a well-balanced platform that remains tractable around town and composed when pushed hard. Real-world handling dynamics—the practical side of any “what’s she like to live with” discussion—are what matter on canyon roads, deserted desert highways, and rush-hour freeways. The Super Snake handles these environments in stride. And while it may not lose a Lotus on Mulholland Drive, the Snake would hold its own and maintain its composure over bumps and irregular surfaces with minimal wheel hop—despite an antediluvian rear suspension. This car pulls up inclines like a freight train, making long road trips especially entertaining and, surprisingly, non-fatiguing. Chalk it up to all that power.

Inside, the cockpit is a cross between classic and kitsch. The A-pillar houses three ancillary gauges for oil pressure, fuel pressure, and boost that only an old-world chameleon can see in time of need. A numbered billet plaque engraved with ol’ Shel’s ubiquitous signature will impress Craigslist dates, and the white cue-ball shifter will appeal to billiard lovers. Indeed, the interior of the 2010 Super Snake has just enough styling attributes to resonate with those who remember 1960s-era Shelbys, especially when tried-and-true rock standards are blasting from the stereo. But any music plays second fiddle to the din of the engine—delicious for those who enjoy mechanical sounds but no doubt unscriptural to the pious Prius people who regard this car as an instrument of Satan. Overall, credit goes to Ford for doing a quality job with surfaces and materials, given the basic nature of the Mustang. Nothing feels cheap, and ergonomics are excellent, as are the supportive sport seats, which provided a comfortable saddle for a trip to and from Monterey for Pebble Beach festivities. In getting there, special mention must be made of the user-friendly navigation system that shames certain fussy German offerings. Sometimes, simpler is better.

“Understatement” has never been a word in the Shelby vocabulary, but neither has “pretentious.” Like its classic predecessors, the Super Snake is not afraid to attract attention. Its massive maw—truly reminiscent of the 1968 GT500KR—fills even the largest rear-view mirrors of motorists ahead. With a bulging scoop nearly the width of the entire hood and a lower front air dam that could double as a cowcatcher on a steam locomotive, this Snake is one of the most aggressive-looking machines on the road today. In other cars, these styling excesses would be silly posturing, but having all those American-bred horses under the hood eliminates any argument about credentials, if not taste. Lest there be any doubt, one pass with the shrieking supercharger spooling up to redline will disabuse any motorist of the notion that this Mustang is show without substance.

Robb Report’s car came with all of the desirable options horsepower addicts will select, and was painted Kona Blue, a dark metallic color that turned to a brilliant purple-blue in the California sun. Super Snake owners should plan to get noticed; in autocentric Southern California, where Lamborghinis barely elicit a second glance, the audacious purple-hued Snake attracted attention on a par with rarities like the Bugatti Veyron, Morgan Aero 8, and Ariel Atom.

This car is all about unbridled fun. But like any well-equipped predator, Shelby’s Super Snake commands respect, and, as with its venomous reptilian counterparts, care must be exercised in handling. Similar to a genuine cobra, the Shelby cannot be successfully defanged, but it can be “milked”—in this case—for entertainment. Drivers who experience its large supercharged V-8 will have trouble settling back into the rocking-chair mode of a normally aspirated engine, and even Ford’s GT500 may seem underwhelming by comparison. Make no mistake, 750 horsepower will break the tires loose in any gear, and drivers with a penchant for antics are in for embarrassment at best and an expensive experience from collision or constabulary if this car comes seriously unglued. Everyone at Robb Report who took the wheel of the Snake saw red lights from behind. Some drivers were better talkers than others; words utterly failed this writer.