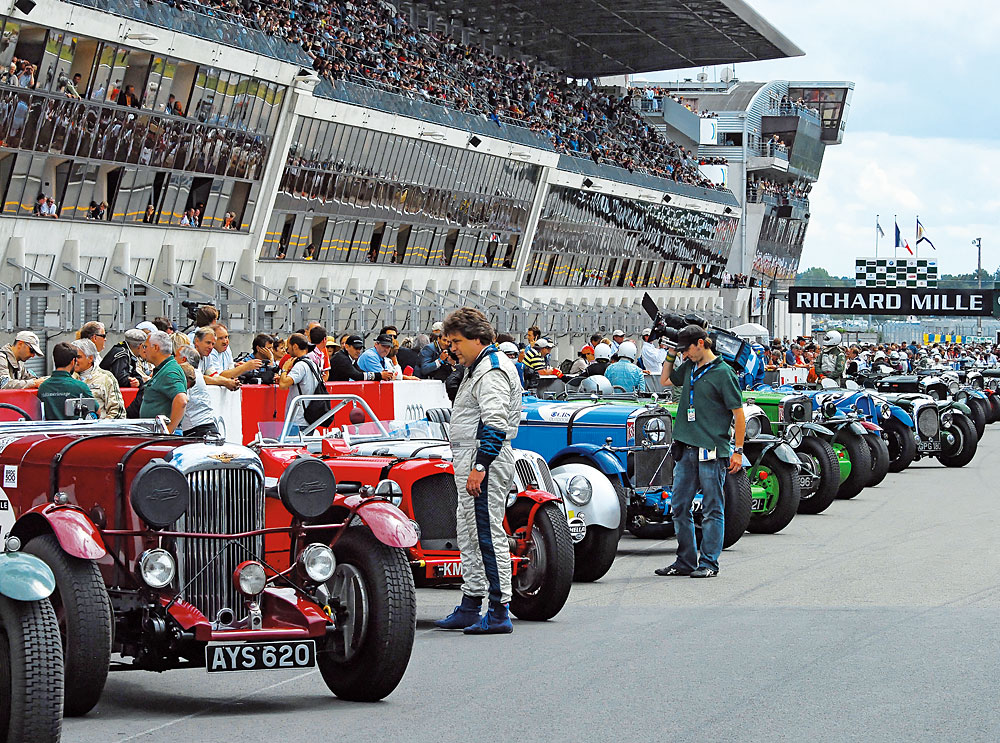 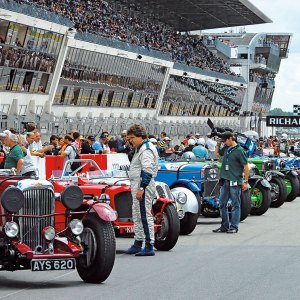 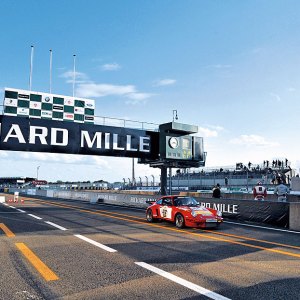 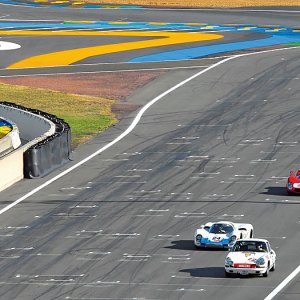 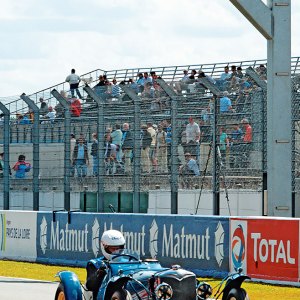 In a private lounge overlooking the start/finish line of the Circuit de la Sarthe—the racetrack in Le Mans, France—Richard Mille, president and CEO of his eponymous watch company, mingled with his guests. Behind Mille, Le Mans, the quintessential racing movie, played on 26 television screens mounted on the ceiling along the top of an expansive glass wall. “Men who love watches love cars,” said Mille, a Frenchman in his mid-50s whose slight build and exuberant nature make him well-suited for the cockpit. “It’s funny, because I love classic cars, but I am not fond of antique watches.”

Mille’s watches do display a penchant for cutting-edge designs, often ones that include references to Formula One racecars. And his presence in July at Le Mans spoke to his preference in autos. He was there to see three jewels from his four-car collection compete in the Le Mans Classic, a biennial event that Mille has sponsored since its inception in 2002.

Among the VIPs in Mille’s suite were Jean Todt—the current director of Scuderia Ferrari and a former CEO of Ferrari—and Formula One driver Felipe Massa, for whom Mille named his RM 009 Felipe Massa tourbillon and RM 011 Felipe Massa flyback chronograph (see “Enduring Design,” page 356). Other guests wore jeans, sneakers, and five- and six-figure watches. They conversed while sipping Champagne and nibbling canapés, and when the cars sped past the suite’s glass wall, they turned their attention to the track.

The cars represented the models that have raced at the 24 Hours of Le Mans from its inaugural year, 1923, through 1979. The most valuable vehicle at this year’s Classic was a 1966 Ferrari 330 P3, said to be worth about $20 million. The lineup also included an aluminum-body 1968 American Howmet powered by a helicopter turbine engine.

Four-hundred cars, divided into six groups, or grids, competed this year. “It’s impossible to mix together cars from the 1920s with cars from the 1970s, because there is a big split difference,” explained event organizer Patrick Peter, who described himself as a very bad driver with a small collection of cars. “With older cars,” he says, “you cannot race them for too long or you can destroy them. So we limit each race to 45 minutes for each grid, and each of the six grids runs three races, for a total of 18 races.” Like the race for which the track is famous, the Classic spans a 24-hour period and features exhilarating after-dark heats.

On the video screens in Mille’s suite, as Le Mans continued to play, actress Elga Andersen asked actor Steve McQueen, “But what is so important about driving faster than anyone else?” Mille and his guests would likely consider such a question rhetorical. Nevertheless, McQueen’s character offered his answer. “A lot of people go through life doing things badly,” he said in the impassive manner that was his trademark. “Racing is important to men who do it well. When you’re racing, it’s life. Anything that happens before or after is just waiting.”

Perhaps because he hasn’t done things so badly beyond the track, Mille, like several other owners, hired professionals to drive his cars during this year’s race (though he has driven at past events). René Arnoux and Shinji Nakano piloted his 1971 Lola T70 MKIII; Anthony Beltoise, Arnoux, and Nakano drove his 1972 Lola T290; and Dominique Guenat and Yvan Mahé took turns behind the wheel of his 1971 Matra MS660. Lola, a prolific English racecar manufacturer that is celebrating its 50th anniversary this year, has built cars that appeal to Mille because of their sophisticated and progressive designs. “They were the first to make a rigid-aluminum chassis,” he said, noting that Lola founder Eric Broadley designed the GT 40 Ford in 1963.

Eight of the drivers at this year’s Classic had claimed 24 Hours at Le Mans victories. They included Jan Lammers, a 20-time Le Mans participant who won in 1988 in a Jaguar XJ-R9, and four-time winner Henri Pescarolo. Vanina Ickx, daughter of Formula One driver and Le Mans champion Jacky Ickx (dubbed “Mister Le Mans” for his record six victories), was listed as a pilot for a half-dozen cars. Other drivers included Audemars Piguet’s president and CEO Georges-Henri Meylan and board member Olivier Audemars, who took turns behind the wheel of a 1970 Porsche 914/6 GT.

The next event will take place in July 2010. A would-be participant can submit photographs of his classic car, a nonrefundable $6,833 entry fee, and a detailed application outlining the car’s features, history, and significance in relation to Le Mans; anecdotes about its performances there are particularly welcome. The race’s selection committee meets regularly to choose the most impressive and interesting cars for each grid.

“You have extremely wealthy people next to those who may have spent all their money to renovate a car and make it run,” said Mille, who estimated that the total value of the cars competing at this year’s Classic was more than $1 billion. “Everyone respects everyone here. There is no snobbish attitude. I love to see people racing. And they really race; they don’t play here. They are courageous to put cars of such high values on the track and push them. I hate car museums; they are sad, like death. I prefer to have those cars breathing and going fast like they did in the old times.”

The classic race drew more than 80,000 spectators, and there was more for them to enjoy than just the bone-buzzing roar of 500-plus hp engines. Dozens of clubs representing more than 40 automakers exhibited almost 7,000 cars, and the Le Mans Heritage Club competition drew 24 cars that had raced at the 24 Hours of Le Mans. These included an Alpine Renault A442B, which won the Best of Show award for authenticity, track record, innovation, design, and general condition; the honor came 30 years after the car’s 24 Hours of Le Mans victory.

“Le Mans Classic is not at all like Formula One, where everything is clinical,” said Mille. “Here you can touch the cars, and see and hear them—450 cars of all origins and all ages. Today, all the cars are made using computers; if you take away the colors and sponsors on an F/1 grid, they all look the same. In [the past], car bodies were made by a man’s hand; each a pure design.”

Mille hears music in the cacophony of the vintage car engines, and he is captivated by the nostalgia and mystique of Le Mans. “What I love about Le Mans is that all my memories come back from when I was young, seeing it on TV,” he said. “Today’s tracks are just concrete. People race in places that look like stadiums. In Le Mans, you drive between the trees, in the middle of the forest. It’s so beautiful with the shadow of the trees on the track.”

The permanent track at Le Mans is only about 5 kilometers long (about 3 miles), but for the 24-hour event held each June—and the Classic race—the circuit expands to nearly 8.5 miles, the world’s longest, including a section of the main road from Le Mans to Tours. Passing under the Dunlop Bridge, accelerating into the Mulsanne Straight, and cruising at full throttle through the forest is a rare treat for racers and the fans who can score a pass to take a few laps in one of the exhibiting club cars.

“Driving the track is unbelievable,” said Mille, recalling a time when he piloted one of his Lolas around the circuit. “At the same time, it’s frightening. The Lola is very powerful. With more than 500 hp, it goes more than 300 kilometers per hour. These are dangerous toys.”

Richard Mille draws a parallel between Formula One cars and high-performance watches: Both types of machines have to be engineered to cope with stress, friction, and shocks.

For his 2005 breakthrough RM 009 Felipe Massa, the lightest mechanical watch ever made (less than 30 grams, or just over one ounce, without the strap), Mille uses such lightweight materials as carbon fiber, aluminum-lithium, and aluminum AS7G–silicium carbide, a composite that can endure extreme heat and stress. The watch, a tourbillon that can withstand regular vibrations and shocks, is named for the Brazilian F/1 driver on the Ferrari team.

Two years later, Mille followed the RM 009 with another timepiece dedicated to the F/1 driver, the RM 011 Felipe Massa flyback chronograph. The watch’s skeletonized automatic movement features adjustable rotor geometry, which allows the mainspring to be set so that it suits the wearer’s activity level. Just as F/1 engineers design a chassis and engine to complement the other’s function, Mille conceived the watch’s movement, case, and dial so that together they enhance the watch’s performance. The movement’s double-barrel system improves long-term torque stability by using more rotational turns, which reduces pressure and friction on the teeth, bearings, and pivots.

To mark this year’s Le Mans Classic race, Mille produced 300 limited-edition RM 011 Le Mans Classic Felipe Massa flyback chronograph watches—150 pieces in full titanium ($95,000) and 150 in red gold and titanium ($100,000). The design is distinguished by a green carbon-fiber flange around the edge of the dial and the white-and-green-checkered Le Mans Classic logo at 12 o’clock.

“Like in Formula One, there is a huge amount of development and testing devoted to producing just a small number of watches,” says Mille. “And everything that goes into an F/1 car is translated into extreme performance, just like in the watches.”