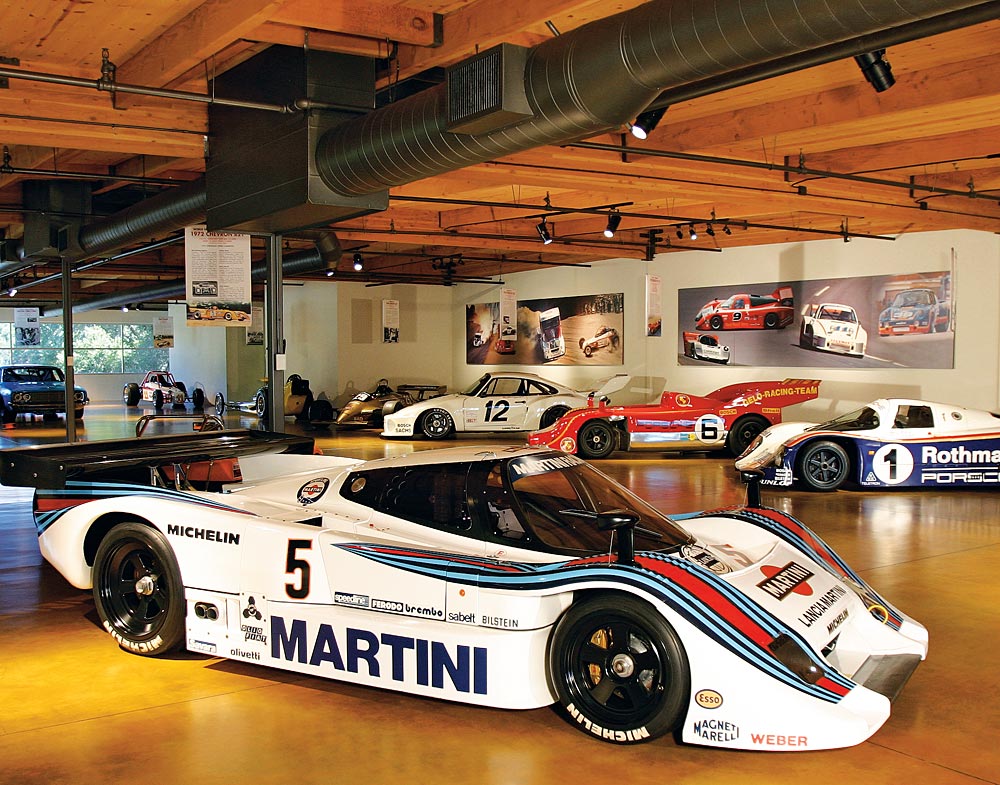 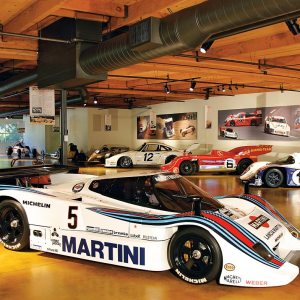 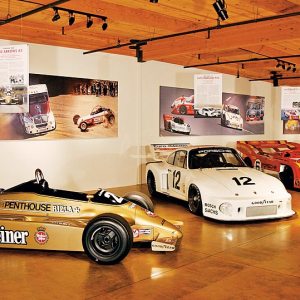 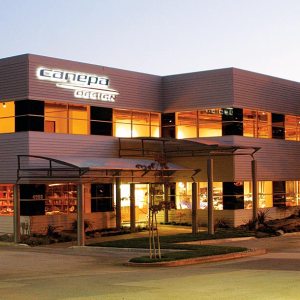 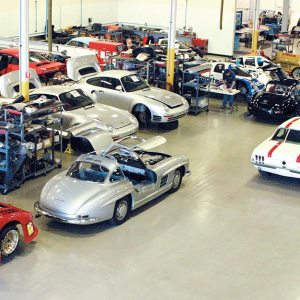 Many years have passed since Bruce Canepa strapped himself into a state-of-the-art Porsche and drove to glory in a series of paved- and dirt-road races. But at 58, he still carries himself like a racecar driver. He is compact, not short, with the chest and forearms of someone who has spent many hours gripping steering wheels. And he still has the focus of a racer—laserlike to the exclusion of everything but the thought currently triggering his brain synapses. Right now, his cerebellum is filled with paint.

“This is right out of the paint shop—no wet sanding, no buffing, nothing—and look at it,” says Canepa, standing before the dark-blue shell of a 1966 Ferrari, one of many exotic cars in different states of undress here at Canepa Design, the business he established more than 20 years ago. “There are few people who can shoot a car and have it come out like this right off the bat. But that’s just one example of what we’re all about.”

Examples of Canepa’s mastery are apparent throughout his eat-off-the-floors-clean facility in Scotts Valley, Calif., a leafy town six miles north of Santa Cruz, the beach community where he grew up. Speaking literally, Canepa Design is a combination of a collector-car showroom; a restoration shop; a federal certification facility for Porsche 959s, as well as other cars; a car-transport design firm; and a race-support outfitter. As if that were not enough, Canepa also has a museum growing on the top floor of the facility (a former Seagate software manufacturing warehouse). But speaking metaphorically, for anyone with even the smallest dose of motor oil running through his veins, this place is nothing short of nirvana.

On this particular day, the cavernous shop area contains a black Ruf Turbo Cabriolet awaiting cosmetic touches; a garage-kept, all-original 1967 Porsche 911S whose paintwork is being massaged (“This is rare, with its Targa top and soft rear window,” notes Canepa); a brand-new BMW M3 Coupe that is having its more eye-popping factory features toned down (“Less is more is my philosophy,” says Canepa); and a 1968 427 Cobra that Canepa’s team recently snagged at a Pebble Beach auction and that is now undergoing a complete restoration typical of Canepa’s obsessive nature.

“As things come off this Cobra, we are saving everything, just everything, from screws to pieces of vinyl,” says Canepa. “You just can’t get original stuff for a car like this, and that’s what makes it truly special and unique, as compared to a car that’s been fitted with new parts. So the leather we’ll not only keep, but we’ll also recondition it to the point where owners of new seats would kill to have leather with a patina like this. And when we redo the chrome, we won’t overpolish it. These cars were never meant to go to Pebble [Beach’s Concours d’Elegance]. We want it to be the way it was.”

Canepa says he is fortunate to have enough like-minded customers “who understand that a preserved car, a car with a true and completely original history, is the car that is ultimately the most valued and valuable.” Those customers are willing to pay $250,000 or more for that type of restoration. “But then again, look at a car like this Cobra,” says Canepa, gazing at the 427. “New, it was maybe six grand. Now, a great one? One-point-three million dollars, easy.”

One of Canepa’s first cars as a raging teen was a 427. “Can you imagine, an 18-year-old with this car?” he says. “I’m surprised I’m still alive.” Canepa survived many encounters with fast vehicles as a teenager, racing quarter midgets and go-karts before graduating to super modifieds and sprint cars. In 1979, at age 29, Canepa teamed with Rick Mears and Monte Shelton and drove a Porsche 934½ to third place overall in the 24 Hours at Daytona. For the next three racing seasons, he drove a 935 with the support of Porsche. During that period, in 1981, he competed at the Pikes Peak International Hill Climb, qualifying first and finishing second overall in a Porsche-powered open wheeler.

Architect Ken Rodrigues, a longtime friend and customer, most recently purchased from Canepa a 1976 Porsche 934 Turbo similar to the car Canepa drove at Daytona. Rodrigues also bought a 1972 911R. Before delivering the cars, Canepa gave each a thorough, hands-on checkup that ranged from examining their brightwork to testing them on the track.

“Bruce always looks at a car with the final design in mind,” says Rodrigues. “He is constantly trying to improve the visual quality, while at the same time adding value that most people can’t offer. For example, the 934 was driven by Hurley Haywood in 1976 and 1977 in the Trans Am series. Bruce has gone back to restore the car like it ran in those days. This can take many hours of research, and leads to a restoration that’s at a higher level. Actually, he has this car looking and running even better than it looked in 1976 and 1977.”

Though canepa’s business welcomes other marques, it usually is populated by cars from Zuffenhausen, Germany. “Porsche was always two decades ahead of other cars, especially when it came to turning and handling,” Canepa says. “The fit and finish were always superb. They were simply building the best cars, period. Sure, they had idiosyncrasies, like having all the weight at the rear. But if you knew how to drive, that was a great thing.”

Canepa’s affinity for Porsche cued his 20-year effort to bring the brand’s legendary 959 supercar to the United States. Porsche made only about 230 examples of the pacesetting, four-wheel-drive tour de force, from 1987 to 1988, before ceasing production without ever meeting U.S. safety and emissions standards. Word from Germany was that Porsche was taking a loss on each car sold.

To make a long and winding story short, a federal show and display law, initiated by Canepa and passed in 1999, now allows the cars to run on American roads provided they meet Department of Transportation guidelines. Meeting those standards requires some retrofitting. A few shops nationwide will perform that task, but Canepa does more. He essentially re-engineers the vehicle, making improvements that Porsche never had time to make given the 959’s short production run.

“Our upgrades to this car run to five pages and about 1,200 hours of labor,” says Canepa, whose cohorts in the 959 legalization campaign included Microsoft cofounders Bill Gates and Paul Allen—”guys who were actually willing to underwrite crash testing on million-dollar cars if that’s what had been necessary,” marvels Canepa. A Canepa 959 costs about $700,000, roughly a third of which pays for the upgrade work. “It’s zero to 60 in three seconds,” says Canepa, breaking into a grin. “A total rocket.”

And yet “you can drive it to the market with ease, no fuss,” chimes in Llew Kinst, Canepa’s marketing director.

With that, Canepa is off. He has cars to attend to and a wing of his massive warehouse to upgrade from a storage area to the company’s motorsports division.

Kinst concludes the tour by first showing off a massive Canepa transporter, an $800,000 means of ferrying those circuit-blistering machines to their places of business. Canepa’s team designed this Peterbilt-driven car carrier with an always-?horizontal rear lift and a passenger suite that is swathed in leather and equipped with various high-tech entertainment.

In addition to the 959 service, a custom transporter business, and the restoration work, Canepa offers a constantly changing array of cars that he does not denigrate with the word used. Instead, affixed to the passenger side of each auto’s windshield you will find a detailed history of the vehicle, along with this bold-faced description: Investment Quality Collector Car.

“We are always looking for the best of the best, sometimes even when it means we’ll be tracking a car and its owner for years,” says Sean Chambers, Canepa’s acquisitions manager.

“There are a lot of great cars out there, but what you often find out when you dig a bit is that one man’s 100-point quality restoration might not be our vision of a 100-point restoration,” says Kinst, noting that Canepa’s team re-created all of the Swiss-winning RSR’s sponsor stickers and that Canepa himself set up the suspension. “Not many companies can offer this sort of hands-on service from someone who’s actually raced these cars,” he says.

If Canepa seems like a man with too many jobs, he has not noticed.

“Aw,” he said earlier that day, waving off the question when it had been posed to him. “I just love what I do. I only sell and work on and support the cars that I love. Really, it’s not more complicated than that.”