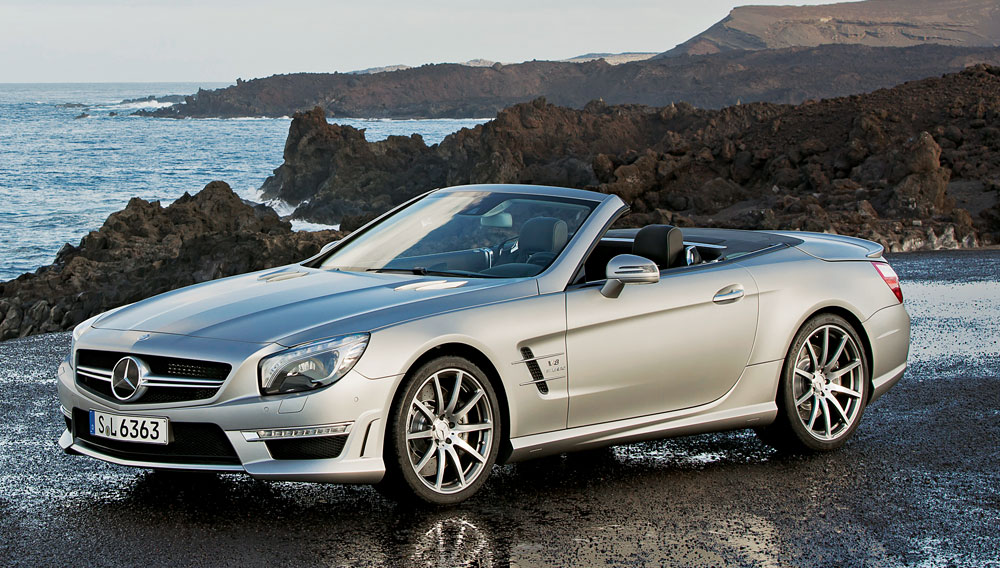 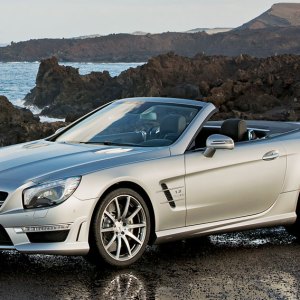 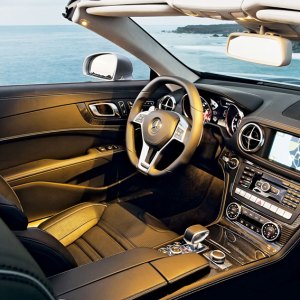 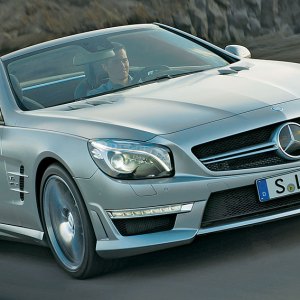 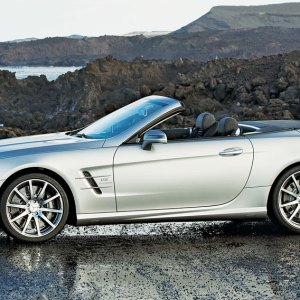 The SL models from Mercedes-Benz have consistently offered drivers technical innovation, blue-chip styling, and reliable performance since the carmaker introduced the series nearly six decades ago with the 300SL, the original Gullwing. The new, 2013 SL63 AMG, the model’s sixth generation, delivers in this same vein, and it is absolutely true to its Sport Leicht designation.

Mercedes-Benz has trimmed 275 pounds of fat from the outgoing SL63 AMG and added muscle: 12 more horsepower units and 125 more ft lbs of torque, raising the power numbers to 530 hp and 590 ft lbs. A radical redesign replaced the old SL’s weighty steel chassis with stiffer, lighter, and more sophisticated aluminum underpinnings. The redesign also includes a carbon-fiber trunk decklid as a standard feature, which is a first for Mercedes-Benz.

Although weight savings invariably will aid a car’s performance, Mercedes-Benz engineers shed some of the SL63’s mass for more frivolous purposes. Specifically, they carved out space in the footwell to accommodate a subwoofer for the 600-watt, 14-speaker Harman Kardon Logic7 sound system. (The optional 900-watt Bang & Olufsen BeoSound AMG SL Surround Sound system features aluminum speaker grilles and illuminated lens tweeters that are set in the dashboard.)

Other improvements to the $146,000, two-seat roadster’s interior include an optional panoramic folding roof with Magic Sky Control, which enables you to adjust the roof’s transparency from light to dark; multicolored ambient lighting; and an elegant IWC-designed analog clock embedded in the dash. The 12-way adjustable seats are available with active bolstering, a heating/cooling function, and the neck-heating Airscarf system.

More than previous versions, the new SL63 offers some of the vigor found in the SLS AMG supercar. During a road test earlier this year in the hills of Saint-Tropez, the SL63 AMG accelerated smoothly under easy throttle in the mildest transmission mode: C for “Comfort.” But the other three settings, especially the S+ (Sport Plus), reveal the car’s more aggressive nature. Press the throttle to the floorboard with the transmission in S+ mode, and the gears will shift in as quickly as .10 seconds.

The twin-turbocharged V-8’s mountainous torque tugs the 4,067-pound car ahead effortlessly from a standstill, emitting a faint but distinct low-frequency hum from the four exhaust tips. Mercedes-Benz claims that the car can reach 60 mph in just 4.3 seconds, and in only 4.2 seconds when you add the $9,000 AMG Performance Package enhancements. The performance package also increases the car’s top speed from an electronically limited 155 mph to 186 mph and the horsepower to 557. The latter figure is just shy of the current SLS AMG’s horsepower rating of 563, though the 2013 SLS AMG GT, which arrives in November as the replacement for the SLS AMG, will be powered by a 6.2-liter V-8 that generates 583 hp.

The SL63 AMG’s test-drive began with a top-up run from the Polo Club Saint-Tropez in the foothills, where the car was tractable and well mannered—but a bit wide for slicing through the area’s skinny streets. When the boulevards gave way to winding mountain roads, the roadster invited daring acts of acceleration and cornering. As the car’s speed rose, the 19-inch tires proved quite capable of handling the g forces that the aggressive cornering generated.

Mercedes-Benz’s Active Body Control (ABC) suspension system automatically adjusts damping levels to compensate for shifts in road surface and driving style, providing a smooth ride and controlled handling. When the ABC is set to Sport Handling—the system’s most liberal mode aside from being disabled entirely—you can drive the SL63 AMG harder and generate more rear-end wiggle, which can be useful on a racetrack but risky on tight public roads. Punch the gas pedal with the ABC set in Sport Handling, and the car will launch forward, the engine exhaust will open, the turbocharger will whine faintly, and the g forces will test your neck muscles. It is an exhilarating experience.

In automatic mode, the 7-speed transmission shifts almost instantaneously, making a brief snorting sound as it progresses from one gear to the next. However, in manual mode, when I upshifted aggressively—using the wheel-mounted paddle shifters, which are made of metal and feel cool to the touch—there was a lag between cog swaps. But if I waited too long while the revs rose, the engine would bounce off the rev limiter for a moment before I selected the next gear. Second-guessing the computer soon became tiresome, so I switched back to automatic. In this mode, the transmission continued to perform flawlessly, suggesting that it is best to entrust gear selection to the SL63 AMG.

On the mountain roads, one of the two test cars’ steering offered relatively intuitive (if somewhat isolated) feedback, while the other was less communicative. Tobias Moers, AMG’s head of vehicle development, later explained that both cars were pre-production vehicles that were still being calibrated, and that it would take “no more than two days” of fine-tuning to solve the issue. Nevertheless, on the windy sections of the roads, both cars offered impressive grip and excellent control—almost too much control. Like all Mercedes-Benzes, they conveyed a sense of security. It is as though the cars filter and refine road feel instead of allowing you to experience the shock of raw, racecar-like feedback. Drivers are further coddled by such safety features as Attention Assist, which monitors driver fatigue by tracking eye movement and lapses in vehicle control, and the approximately $3,000 Driver Assistance Package, which includes features that warn drivers about vehicles in their blind spot and alert them when they are drifting from their lane.

For all its power and outrageous performance, this car retains the SL’s character as a luxury model line. Mercedes-Benz has not sacrificed the series’ soul for the sake of obscene acceleration and spine-tingling grip. The new SL63 AMG delivers a wallop, but it does so with a velvet hammer. It is by no means a masterpiece free of imperfections, but the roadster is a stunning achievement in engineering.