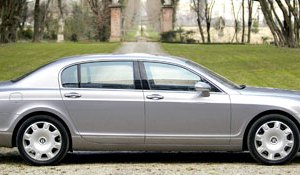 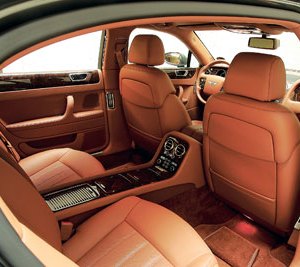 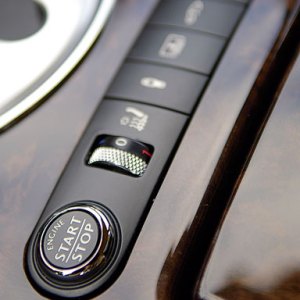 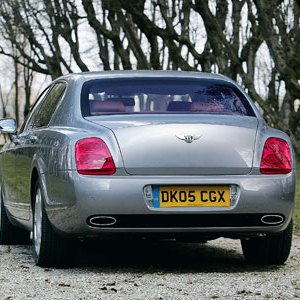 A blemish on the aristocratic presence of the new Bentley Continental Flying Spur may well be the car’s terribly awkward, very ordinary name.

Flying Spur. It sounds like the name of a dude ranch in a Roy Rogers two-reeler. Worse, after spending millions of marketing dollars to produce a general state of amnesia about its past connection to Rolls-Royce, Bentley christens its new baby Flying Spur, a name that was sprinkling the ranks of Rolls-Royce for about 20 years in the 1950s and ’60s and then again as recently as 1994.

As for the Continental portion of the name, one might infer that this is a reference to the elegantly raucous, heavily lauded, and hugely popular Continental GT. And if that is so, then the name implies that Bentley simply cut two more holes in the fuselage of the mother car, installed a pair of doors, and, with a modicum of modification, delivered a saloon version of the Continental GT.

Such word associations no doubt were considered while settling on a name for this latest addition to Bentley’s carefully revitalized fleet. Many levels of management in Crewe and in Wolfsburg (the home of parent company Volkswagen) participated in the process—from marketing middies to genial CEO Franz-Josef Paefgen, with clusters of focus groups in between. In the end, according to Bentley insiders, Paefgen and the focus groups ruled. “We certainly did debate it, long and hard,” acknowledges Adrian Hallmark, Bentley’s director of marketing and sales and one of the debaters. “But then we came down on the side of tradition.

Specifically, he says, the name is a reference to the traditions that Bentley established with its 1952 Bentley R-Type Continental coupe and 1957 Continental Flying Spur sedan, a pair of postwar classics from the days when a Bentley was mostly a Bentley and not a virtual clone of a Rolls-Royce. Indeed, all variants of 1950s Continentals have become auction-block darlings, considered perfect representatives of the British car builder’s finer hours. “So the new Flying Spur is not a replication of the old Flying Spur, but a repeat of the concept of the ’50s,” explains Hallmark.

The 2006 Continental Flying Spur upholds its family tradition of possessing more muscle than 99.9 percent of its drivers ever will muster for highway use. It is the world’s quickest four-door, and the second-fastest car built by Bentley, after its Speed 8 Le Mans winner. It scoots to 60 mph from rest in 4.9 seconds, clawing the ground faster than anything in its class. Top speed is 198 mph—which will get you from here to three miles away in about 60 seconds—a pace one might expect from any family supercar with a biturbo, 12-cylinder engine developing 552 hp. That is not quite as rapid as a Ferrari Enzo or a Saleen S7, but they have only two doors, cost three times as much as the Bentley’s estimated price of $165,000, and have neither the room nor the good manners to be taken grocery shopping.

The Flying Spur is more than the lap of luxury; it is self-indulgent swaddling. Even with the front seats racked back for those who buy their clothes extra-large and superlong, there remains enough rear-seat legroom for six-footers to sprawl in their adjustable heated armchairs.Woods are warm and nearly ubiquitous—from the fascia that ascribes Bentley’s winged B trademark through hand-lacquered waist rails to an opulent covering for a single console that spans the entire center line of the car. This relatively wide, definitely lengthy, all-flowing fore-and-aft wooden cascade of lids and hidey-holes certainly will heighten the sense of division for riders who like to remain aloof from the person on the next bar stool.

Hardly excessive, all of this lumber recalls the Bentleys of more extravagant eras. It is prominent without being obtrusive, explains Bentley’s interior designer, Henrik Nordin. “It [the interior] feels elegant, sumptuous, and subtly sporting, which is exactly the sort of statement this car should make.”

To ensure the quality of the materials, Bentley left one of these cars in the African desert for a year, then checked for any separation of the laminates and deterioration of the leather. The Flying Spur’s hides—11 are used for each car—come from herds in remote regions of northern and central Europe, where leathers are free of scar tissue, warts, and insect bites. And Bentley rejects any leathers that show neck creases.

The choice of woods includes olive ash and tulip wood from just about anywhere, walnut from France, madrone from America’s Pacific coast, and vavona from the roots of California redwoods, though tree huggers need not worry, because Bentley claims that its suppliers harvest only redwoods that have died from natural causes. All woods are mirror-matched and receive five coats of lacquer.

None of the usual interior touches has been left untweaked. In the belief that once inside, you may wish to move in, Bentley has equipped the Flying Spur with seats that are posture contoured, built to protect against lordosis, kyphosis, and scoliosis. The steering wheel is covered in leather that takes five hours to be double-stitched by hand, the center armrest contains a Bluetooth handset, and the ashtray has a touch-resistant surface.

Although the Continental GT and the Continental Flying Spur share a forename, differences between the coupe and the sedan extend far beyond the door count. It is true that 62 percent of the underpinnings are common to both cars. But this percentage includes massive and generally unseen components—a power train from the Volkswagen Phaeton, chassis subframes from Audi’s A8, and all-wheel drive that is also from Audi—while all of the Flying Spur’s dimensions and visuals are new from the A-pillar aft.

Granted, the cars were developed side by side in Bentley’s styling and engineering studio, and yes, the grille and headlight assemblies of the Spur were lifted from the GT. However, the Spur is an almighty 20 inches longer and more than three inches taller than the GT, and it has a wheelbase that is 12 inches greater. It carries more people, has a trunk that can accommodate a couple of steamer trunks, is heavier by about one NFL tight end, and, with its hefty rear overhang, appears every inch the roomy sedan.Adding the Flying Spur to the clan clearly makes Bentley a family divided. In one corner, wearing the blocky lines and square squat of luxury cars from decadent decades long past, are three flavors of the venerable Arnage. Recently added to this senior citizenry was the Arnage DHC (drophead coupe), which is huge, extravagant, expensive (an estimated $380,000), and will make any owner feel marginally Victorian. The number of buyers of these neo-antiques dwindles annually.

Contrast this automotive Sun City set with the Continental clique of 2006. The relatively inexpensive GT and the Flying Spur—with a GT convertible in the wings—are the new generation, representing a daring direction and the fresh attraction of Bentley. They are slick and cool, with liquid lines that will make them viable for another 10 years, a time span that should increase, rather than claim, members of their audience.

“It’s an interesting problem,” acknowledges Hallmark, his focus on this concern slowing his consumption of something called “small and tepid tarte with grappa sherbet” at the Quadri restaurant (circa 1638) in Piazza San Marco, Venice, where the Flying Spur recently underwent its media introduction. “You have the Arnage at one end of the Bentley spectrum, and the [Continental] GT at the other end. Our job is to fill in the middle.”

Hallmark believes Bentley will sell more than 6,000 cars in the years immediately ahead, and only 10 percent of those will be Arnages. But this percentage is expected to remain relatively stable until 2010, and so it represents profits that Bentley is not about to discard.

Because the streets of Venice are more suited to amphibious operations than road tests, we picked up our Flying Spur at Marco Polo Airport and went exploring the towers and pinnacles of the Dolomites, driving from spring and sunny sea levels to Alpine heights where snow lingers and small villages are still sleeping off winter.

It is ideal terrain for the Flying Spur. The autostrada slicing north from Venice is eight lanes wide, as straight as a pipe, and on this day, by some quirk of the early workweek, it is virtually abandoned. At 100 mph the Spur is barely awake, let alone flying. The car begins stirring at 140 mph, and at 180 mph she is fully alert, roaring and raring to go and with more muscle in reserve than most right feet and reflexes are willing to challenge.

Then it is time for the twisties around Santa Croce del Lago and a couple of spirited jousts with an Alfa Romeo and a BMW 5 Series. The Flying Spur, as big (more than 17 feet long) and as heavy (about two large passengers shy of three tons) as it is, rides incredibly light but stable on Pirelli Rossos and 19-inch wheels that fit their wells better than an Armani T-shirt to your torso.

Deep braking and g-force acceleration, plus quick and easy access to an excess of paddle-shifted power, continually embarrass the nippier competition. But the wonder of the Spur is most apparent in quick turns, where we experience a slight shifting of weight and balance and then a noticeable halting of all lateral movement, as a peerless suspension and traction controls absorb that mass in motion. Adding to the stability is a rear diffuser, a broad and deep bank of airfoil vanes beneath the back end that produces several hundred pounds of downforce for enormous adhesion in quicker corners.

This is an imposing car, not beautiful, but striking. The front and rear suggest its speed and power, and its silhouette is plain and unobtrusive, a shape that reduces its message of elegance to a whisper.

So, as Romeo’s Juliet mused, what’s in a name? Well, it seems that a Bentley Flying Spur by any other name would be as sweet.