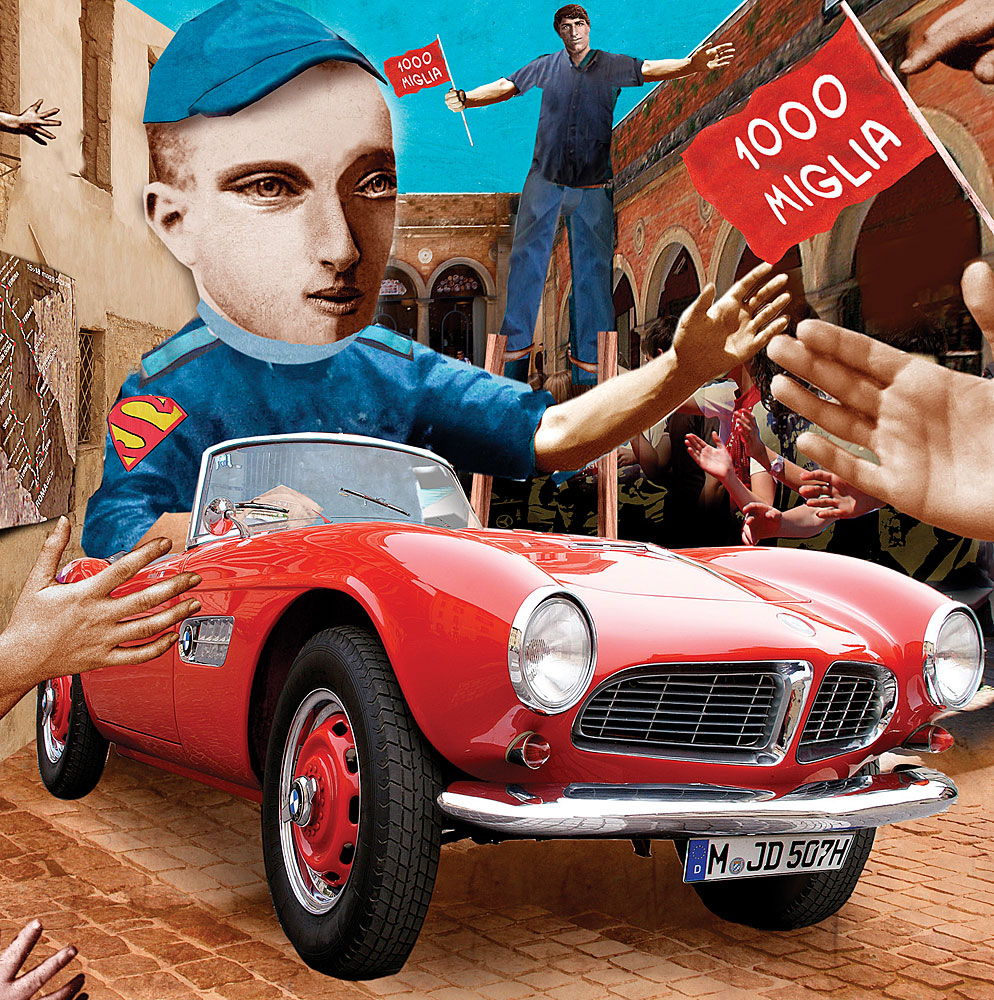 Children shout as I pass through their villages; “Suuuuuu-per-maaaaan!” they scream at me. In Italy, where Ascari, Fangio, Moss, Nuvolari, and other legendary racecar drivers still are revered for their Mille Miglia exploits, a first-time participant would not expect such adulatory reactions from the young spectators lining the route for this, the 80th-anniversary running of the thousand-mile race from Brescia to Rome and back.

However, the children’s shouts are in response to my attire, not the prowess with which I am driving a 1957 BMW 507. It is a sunny, hot, late-spring day in Tuscany, and I have unzipped the top half of my blue Nomex driving suit, revealing the red-and-yellow S shield emblazoned across the front of my T-shirt. The symbol obviously transcends continents and languages. For auto enthusiasts, the appeal of the Mille Miglia is equally universal. The 375 drivers participating in the 2007 edition of the historic car rally come from 26 different countries.

In Italy, the Mille Miglia is a three-day national celebration that, each May, draws more than 3 million spectators. In dozens of cities and villages and throughout the Italian countryside, fans line the streets and the cobblestoned pathways. Some of the spectators are seated in grandstands erected on sidewalks and roundabouts.

While I steer through the narrow streets of one picturesque Italian town, Rob Mitchell, a communications manager for BMW North America and my Mille Miglia codriver, tosses to smiling youngsters autographed photo cards depicting our red convertible. “Bella màcchina!” a boy cheers as his mother grasps his hand, restraining the tyke from jumping into the car with us. We had signed the photo cards earlier in the day, because, frequent traffic jams notwithstanding, we have little time to stop. “Buona fortuna!” the woman shouts as her son waves his prize. Our fame proves fleeting, however, for just behind us, in another BMW 507, are Italian film and television personalities Luca Bizzarri and Paolo Kessisoglu, who apparently merit more adulation than do a mere superhero and his sidekick.

Major and minor celebrities are among the Mille Miglia’s participants each year. They are joined by several former Formula One racers, a smattering of European aristocracy, and a few journalists. But most of the drivers are motoring enthusiasts and car collectors piloting their prized vintage automobiles.

“When you drive in the Mille Miglia, you see the real Italy, the way it looked 400 or 500 years ago,” said Bavarian prince Leopold von Bayern. Poldi, as friends and acquaintances call the prince, is a perennial contestant who, as a retired BMW factory team driver and the great-great-grandson of King Ludwig I, fits into both the ex-racer and the aristocracy categories of participants. Four or five centuries ago, you would not have heard the constant din of carbureted engines or smelled the odors of rubber, oil, and leaded gasoline, but nowadays you do traverse roads in the Mille Miglia that normally are closed to motorized traffic. Try driving right in front of the Duomo in Florence at any other time of year without being arrested, and buona fortuna, indeed.

I met the prince on the day of “scrutineering,” the process during which each car’s authenticity is confirmed (a rubber-stamp procedure) and drivers and codrivers register for the race. Here in downtown Brescia—located between Milan and Verona in northern Italy—among countless vendors hawking officially licensed Mille Miglia merchandise to tens of thousands of spectators, the participants receive their official keepsakes: shirts, jackets, baseball caps—even showerheads—branded with the race’s trademark freccia rossa (red arrow), and the Mille Miglia–edition Chopard wristwatch.

Chopard has sponsored the race since 1988, and company president Karl-Friedrich Scheufele has driven in each of those Mille Miglias. This year, he has partnered with ex-racer Jacky Ickx in a 1938 Auto Union Wanderer W25 K. “Our watch collection grew with the popularity of the event. In 1988, a lot of our clients didn’t know anything about the Mille Miglia. It was really an insider thing,” Scheufele explained before the race. “Only the real car enthusiasts had any idea what was going on.”

What went on this day could be described as slightly organized chaos. Following the scrutineering, the participants took a leisurely, late-afternoon drive to the Museo della Mille Miglia, a converted 11th-century monastery that hosts the celebratory kickoff buffet before the rally’s official start. “It is like visiting a living museum,” Scheufele said. Here, the cars lined up older to newer; car number one this year was a 1929 Officine Meccaniche (OM) 665, and the last car, number 375, was a 1957 Ferrari 250 TDF. Alfa Romeos, Fiats, Lancias, Maseratis, and other Italian cars slowly filled the museum’s gravel parking lot, along with dozens of entries from BMW, Mercedes-Benz, and Porsche. Fifty-five marques were represented in the parking lot, but not all of the entrants were supercars. This year’s field included a sprinkling of Erminis, MGs, Rileys, and Stanguellinis. The cars’ performance capabilities ran the gamut from anemic (1953 Fiat 500) to dynamic (1954 Ferrari 500 Mondial).

After the cars rolled into place, food was served, the sun began to set, and new acquaintances and old friends struck up conversations. I met up with Mark Gillies, executive editor of Car and Driver, who was participating in his sixth Mille Miglia, behind the wheel of a 1953 Jaguar C-Type. “The organizers do a good job of selecting cars that are representative of the event, not just all the exotics they can possibly get,” Gillies said. “So if you’ve got a BMW Isetta—something very unusual that took part in the original event—you might get in.”

I solicited Gillies for any advice he might impart to a rookie hoping to make a competitive showing. “The first rule to winning is simple: You must be Italian,” he said. “But if you finish in the top 30, and you aren’t Italian, you can consider that sort of a victory.”

Being Italian seemingly always has been a prerequisite to winning the Mille Miglia, even when the event was a pure speed contest. It began in 1927 as a road race open only to series production cars. Seventy-seven drivers took part in the first Mille Miglia, and about one-third of them failed to finish. The winner was Ferdinando Minoia, an Italian. In the ensuing 24 runnings of the Mille Miglia, Italian drivers won 20 times.

The current Mille Miglia is essentially a procession interspersed with low-speed time trials in which contestants attempt to roll over a series of rubber strips placed across the road at randomly spaced intervals. Since neither I nor Mitchell, my driving partner, is Italian, and therefore, according to Gillies at least, we had no chance of winning, I was not overly concerned with the Mille Miglia’s complicated scoring system. Your final tally depends on how much your times deviate from the predetermined, ideal interval times, and it requires practice and precision to post a top score. Ultimately, we finished in the top half of the field, taking 163rd place, which is not a bad showing for two unseasoned Americans.

While it may not be the oldest vintage automobile event, the Mille Miglia is the most storied. Sir Stirling Moss, one of the rare non-Italian victors, achieved the record best time in 1955, driving a Mercedes-Benz 300 SLR with journalist Denis “Jenks” Jenkinson as navigator. They completed the circuit in just over 10 hours, traveling at an average speed of nearly 98 mph. Despite his triumph, Moss considered the Mille Miglia his least favorite race. “I never cared for it,” he has said. “It’s impossible to memorize a 1,000-mile route, so driving [the Mille Miglia] was quite dangerous.”

The events of the 1957 race, the last running of the original Mille Miglia, underscored Moss’ sentiment. Don Alfonso Cabeza de Vaca y Leighton, Carvajal y Are, the 17th Marquis de Portago and 13th Conde de la Mejorada, is a long name to live in infamy, so the Spaniard is more commonly remembered as Alfonso de Portago. Forty miles from the finish line, the 28-year-old gentleman driver’s Ferrari 355 S lost a wheel and crashed into a crowd of spectators, killing him, his navigator, Edmund Nelson, and 10 bystanders, five of whom were children. The race was discontinued, and charges of manslaughter and lawsuits were brought against the car’s builder, Enzo Ferrari, who eventually was exonerated of any crimes.

Reincarnated as a classic car rally in 1977—and renamed the Mille Miglia Storica—the event now is essentially a three-day sightseeing tour of Italy, though not one completely devoid of danger. I share my birthday with Alfonso de Portago. That coincidence, combined with the fact that the vintage of the car I am driving is also the year of his death, provides an unsettling reminder that piloting old cars on public roads can be a risky activity.

“There are only three true sports: bullfighting, mountain climbing, and motor racing; the rest are merely games,” is a quotation often misattributed to Ernest Hemingway, likely because of his fascination with potentially deadly activities. The Mille Miglia could be considered a combination of the three sports. While driving vintage racecars, you traverse potentially harrowing mountain passes and face the near-constant threat of a run-in with wayward livestock. “The Mille Miglia is long, difficult, and tiring,” longtime organizer Costantino Franchi has said. “The most important thing is to leave Brescia and to return to Brescia.”

After the late-afternoon lunch at the museum, Mitchell and I waited patiently to leave Brescia as the cars ahead of us departed in 20-second intervals. We did not leave until 9:30 pm. In the race’s original incarnation, our car would have borne the number 930, reflecting our starting time. Today, car numbers are based on the age of the automobile, more or less. Our names—R. Mitchell and G. Anderson—were stenciled onto the sides of the arbitrarily numbered car 273, along with American flags representing our country of origin.

On the first night of the Mille Miglia, each car rolled across an old, wooden platform in Brescia to begin the roughly four-hour drive to Ferrara via Verona. When we reached the platform, our names were announced over the public address system, and then the start flag was raised from the hood of our car. People formed walls on both sides of the streets; most were standing behind hay bales and wooden barricades, but others ventured closer and leaned into the street to try to touch us as we passed. “I once heard a story about a spectator who reached in and punched a driver in the face,” Mitchell warned. Overcome by the moment, I reached out and slapped someone a high-five, which, the sharp pain in my hand indicated, is not a wise thing to do while driving at a 30-mph clip.

The second day’s drive begins early in Ferrara and ends late, but spectacularly, in Rome, where the Mille Miglia menagerie gathers in front of Castel Sant’Angelo for perhaps the highlight of the event. When the last participant finally arrives, the carabiniericordon off Rome’s busiest intersections and we depart en masse to enjoy a relatively high-speed, police-escorted sightseeing tour through the heart of the Eternal City.

I snap blurry photos of the Colosseum and the Vatican while flying through red traffic signals, and when the drive ends and we arrive at our hotel, a woman asks me if I am a racecar driver. “At first I thought you were the pope,” she says, noting the police escorts. “You know, he gets traffic control, too.”

No, I am not the pope; I am not even Superman. But for today, at least, I tell her, yes, I am a racecar driver.