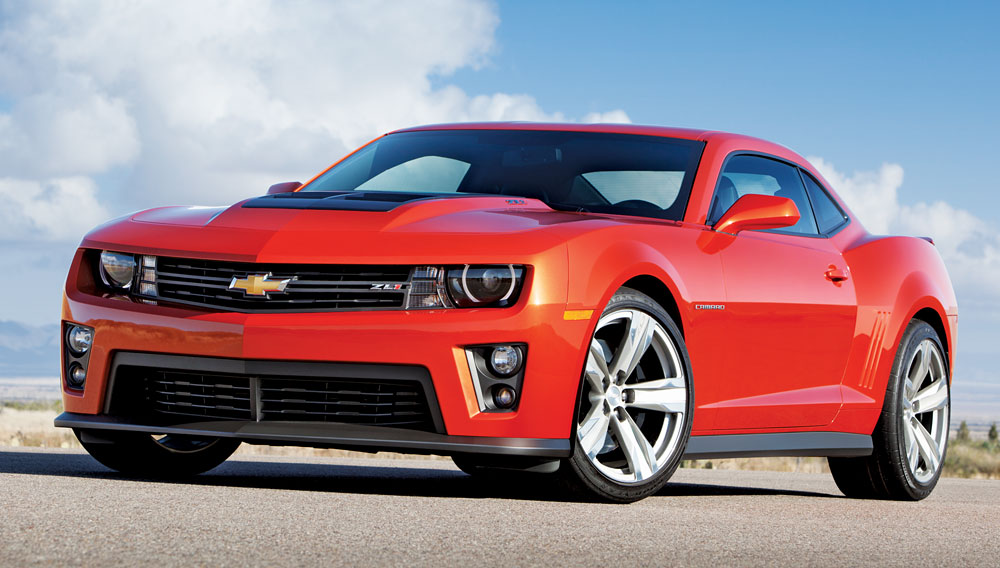 Other than a name and an all-aluminum engine, the new Camaro ZL1 has little in common with the original ZL1, a high-performance, very limited-production variant of the 1969 model-year muscle car. However, the two cars do share a significant distinction: The ’69 edition once was the most powerful Camaro ever, and that claim now belongs to the latest ZL1.

Chevrolet’s marketing folks have pointed out that the new ZL1 also is the most technically advanced version of the model and thus worthy of the name that first denoted the most exclusive—as in rarest and most expensive—Camaro. The original’s scarcity also has made it the most collectible Camaro, with examples recently selling at auction for nearly half a million dollars. However, when it was new, the car was not so coveted. Indeed, the Chevy dealership responsible for the ZL1’s production failed to sell most of the 50 that it ordered.

Sales should not be a problem with the new ZL1, which, among other attributes, boasts a 580 hp engine. But when you are test-driving the car on the rain-slick tarmac of the Virginia International Raceway, its engine is not nearly as enticing as it is on the spec sheet. In such conditions, prudence trumps foot-to-floor exuberance, and qualities other than power—namely traction—become more germane.

Fortunately, the ZL1 offers remarkable stability. The electronically controlled enhancements to the standard Camaro’s suspension and steering are as impressive as the 6.2-liter supercharged V-8 powerhouse, which, according to Chevrolet, pushes the ZL1 from zero to 60 mph in less than four seconds and enables it to reach a maximum speed of 184 mph.

Simple anti-wheel-spin and stability-control systems are legion in the automotive industry, but in the ZL1, drivers can adjust the settings for those systems, as well as the settings for the handling, suspension, and steering-control units. The car’s Performance Traction Management system offers five modes—from Wet to Race—allowing you to select the one that best suits the road conditions and the car’s speed. When you are testing the capabilities of the ZL1’s 555 ft lbs of torque on a raceway’s slippery surface, the traction-management system seems essential.

The ZL1 also features Magnetic Ride Control, which General Motors first developed a decade ago with Delphi and installed in some 2002-model-year Cadillacs. Other carmakers subsequently adopted the system, including Audi for its R8. The system uses shock-damping fluid that changes viscosity as it receives different levels of voltage. Speed- and suspension-position sensors control the voltage and essentially enable the system to switch seamlessly and instantly between different shock settings, each the optimal choice for specific road and driving conditions.

Chevrolet bills the ZL1 as “track-day ready,” and, as such, the car is equipped with Brembo calipers, Goodyear Eagle F1 Supercar tires, and fluid coolers for both the differential and transmission. To improve the ZL1’s aerodynamics, Chevrolet subtly altered the shape of the standard Camaro. The ZL1 retains the base model’s familiar neo-lead-sled, chopped-and-channeled look, but, most noticeably, it has gained a rear diffuser and a downforce-generating wing.

The ZL1’s combination of blistering speed, near-flawless handling, and civility moves it close to supercar territory. But it has a base price of only about $55,000, and all the essential elements are standard equipment. Options include suede-like microfiber on the steering-wheel rim and shift knob, a sunroof, a painted or clear-coated finish on the carbon-fiber hood insert, and matte-surface or polished wheels. This summer, Chevrolet will begin selling a convertible ZL1, which will have a starting price of approximately $60,000.

The original ZL1 did not have such an appealing price. In 1968, Illinois Chevrolet dealer Fred Gibb employed GM’s COPO (Central Office Production Order) system, normally used for fleet orders or specialty vehicles such as taxis, to request a high-performance Camaro equipped with an all-aluminum 427 cu in (7-liter) V-8 engine. GM had developed the engine for the Corvette for Can-Am road racing. Gibb made the request on behalf of drag racer Dick Harrell, who had tuned and raced other Chevys that the dealer previously ordered.

GM approved the order—COPO number 9560—but required that Gibb take at least 50 cars, the amount necessary to meet the National Hot Rod Association’s drag-racing homologation requirement. After other Chevy dealers placed orders for similarly equipped cars, the company eventually built 69 examples of what later became known among enthusiasts as the ZL1, named for the engine’s alphanumerical designation; Chevrolet never applied a moniker to the model.

The car was powerful, with as much as 500 hp according to a consensus of estimates (Chevrolet never officially revealed the engine’s output), but because of its price, the ZL1 was not popular. It cost $7,200, compared to about $2,700 for a base V-8 Camaro, which included many more creature comforts than the bare-bones dragster offered. The ZL1 engine alone cost $4,100, or about the price of an entire Yenko Camaro, the 1969 COPO car ordered by Pennsylvania Chevy dealer Don Yenko that was equipped with an iron-blocked 427 engine. (GM ultimately produced more than 1,000 Yenko Camaros.)

Gibb found buyers for only 13 of his ZL1s, the last one leaving the lot in 1972. The unsold cars were returned to the factory and then sent to other Chevy dealerships. Some of those dealers and others who earlier had ordered the COPO 9560 Camaros replaced the ZL1 engines with less expensive ones so they would have a better chance of selling the cars. A number of the ZL1-powered cars that were purchased and raced eventually ended up with replacement engines and underwent body modifications.

In a nod to the original, Chevrolet is producing 69 Camaros branded as COPO Camaro. This not-street-legal variant will come with a roll cage, no soundproofing, minimal accessories, and a choice of three V-8 engines— two different supercharged 5.7-liter models or a 7-liter, each bolted to a Powerglide automatic transmission. Prices will begin at $89,000.

Alluring as the original is, the new ZL1 offers the benefits of evolution. Its more highly developed engine, transmission, brakes, and suspension create a remarkably pleasurable driving experience. The car’s ergonomics are excellent, from the soft but well-bolstered seats to the steering wheel (which is flattened at the bottom of the rim to allow extra leg space) and control positions, though the low roofline and large air outlet on the hood can make a driver feel claustrophobic. Six-foot-plus drivers who plan to race the ZL1 will want to forego the sunroof option, because they will not have enough headroom to wear a helmet.

Road driving reveals the ZL1’s gentle side. The engine loafs, and the suspension is compliant. You can relax and enjoy superb audio and climate-control systems. It is difficult to believe that the same car can be hurled around a track at velocities usually associated with cars costing three times as much or more.

This new Camaro might be exceptionally powerful and fast, as the legendary muscle car was, but it also might be too refined, comfortable, and obtainable to bear the ZL1 name.