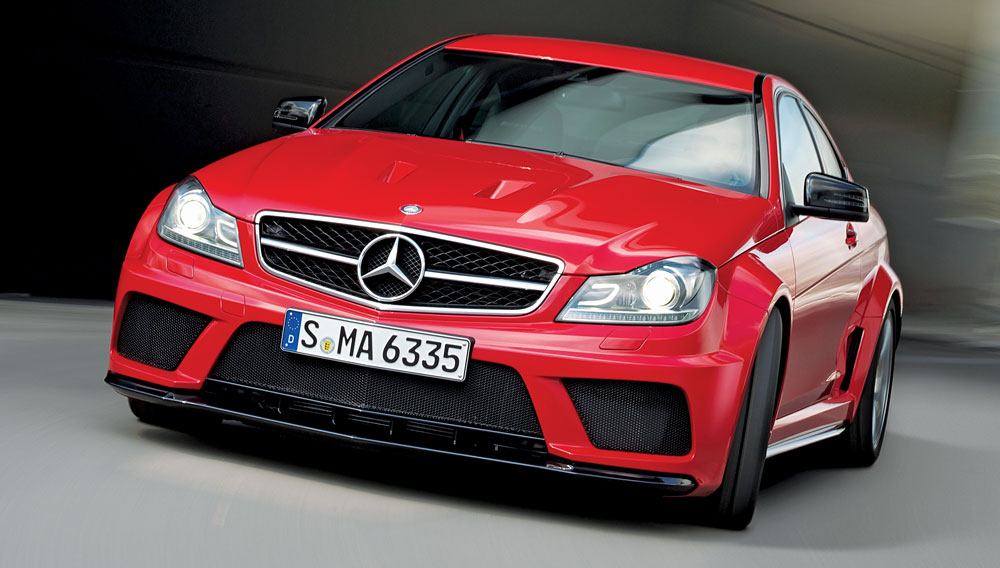 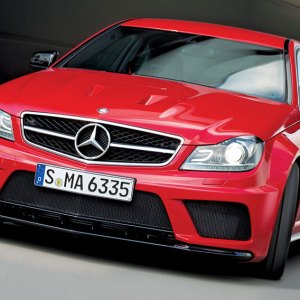 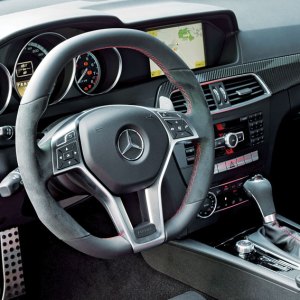 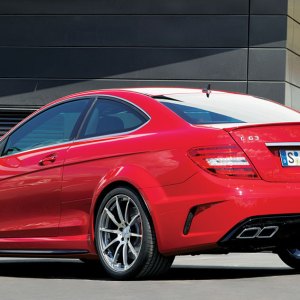 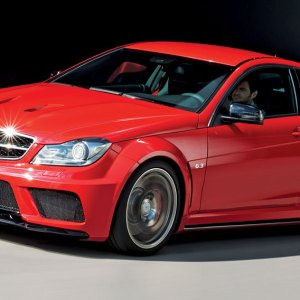 Mercedes-Benz had a good year in 2011, selling nearly 250,000 passenger vehicles in the United States alone—from C-Sedans to G-Wagons to SLS AMG Gullwings. But with such sales comes ubiquity: Mercedes-Benzes are so common in Southern California’s Orange County that they have been dubbed the “Chevrolets of the O.C.” This can be a dilemma for Mercedes-Benz owners, because ubiquity clashes with exclusivity, one of the brand’s core tenets. And although Mercedes-Benz still practices artisanal motor-making with its AMG division (“One Man, One Engine” goes the motto), it now applies the high-performance upgrade to a range of vehicles so broad that it includes the diminutive SLK55 roadster and the plus-sized G55 SUV.

In 2006, Mercedes-Benz launched a sub-brand that caters to drivers who find off-the-rack AMGs too common. The Black Series line is meant to represent ultimate exclusivity—think American Express Centurion Card (aka the Black Card). Thus far, the company has performed the Black Series treatment on four AMG models, the latest of which is the C63 AMG Coupe. Mercedes-Benz will ship a limited number—maybe as few as 100—of the C63 AMG Coupe Black Series cars to the United States, each carrying a starting price of $105,000. The cars are scheduled to arrive here this spring.

For the sake of speed and grip, Mercedes-Benz transformed the relatively docile-looking C63 into a raucous machine that resembles a DTM racer. The Black Series Coupe sports spoilers, skirts, diffusers, and other aerodynamic accoutrements, and an optional package includes a carbon-fiber front apron and splitter, winglets on the sides of the nose called flics for additional downforce, and a rear airfoil with an adjustable blade. Contributing further to the Coupe’s racecar resemblance are vents and large air intakes.

The car’s flared fenders house 10-inch-wide (front) and 11.2-inch-wide (rear) tires wrapped around lightweight 19-inch wheels, which, compared with the standard C63 AMG, are set about 1.6 inches farther apart at the front and 3.1 inches aft.

Its sexy getup notwithstanding, this hot rod’s main attraction lurks beneath the ripped bodywork and vented hood. The Black Series Coupe’s numbers are as imposing as its appearance: It accelerates from zero to 62 mph in a claimed 4.2 seconds (though likely even quicker) and is said to have completed a lap of the Nürburging Nordschleife in only 7 minutes, 46 seconds, which is close to the time of the more glamorous SLS AMG.

Unlike the standard C63 AMG Coupe’s 451 hp engine, the Black Series’s naturally aspirated, 6.2-liter V-8 inherits a few components from the SLS AMG’s powerplant, including a lightweight crankshaft, forged pistons, and connecting rods. These parts help boost the engine’s power to 510 hp and its torque from 443 ft lbs to 457 ft lbs. All that twist travels through a 7-speed multiclutch automatic transmission and into a rear differential that locks up during hard acceleration and during braking to enhance stability. A three-stage ESP system keeps vehicle dynamics in check. Upgraded six-piston front brakes and four-piston rear brakes provide stronger, fade-free stops.

Late last fall, Mercedes-Benz hosted test-drives of a European-specification Black Series Coupe at the 2.2-mile Mazda Raceway Laguna Seca in Northern California. The test car was equipped with the optional AMG Performance Media package, which logs lateral and longitudinal g forces, lap times, engine output, and throttle position. The car also came with unyielding carbon-fiber seats, which are not available to U.S. buyers. (The American model will be equipped with softer but still sporty perches.)

A small, ridged aluminum dial on the dashboard denotes the choice of four transmission settings: Controlled Efficiency, Sport, Sport +, and Manual. Drivers have only three options for the stability setting: On, Sport Handling, and Off. Apart from adjusting those settings and the angle of the rear wing and the coil-over suspension, drivers have little to fiddle with in this cockpit compared with those of BMW’s button-heavy M cars. The minimal amount of options is not necessarily a negative: No one will suffer analysis paralysis when configuring the Black Series Coupe.

The Coupe fires up with an effusive rumble and sprints forward with swift and easy acceleration under mild throttle. When looping around the paddock and onto the track, the car exhibited a direct connection between the thick, flat-bottomed, Alcantara-lined steering wheel and the sticky Dunlop Sport Maxx race tires, which, along with a rear differential oil cooler, are part of an optional Track Package. Turn the wheel, and the approximately 3,800-pound Coupe obeys instantly. Similarly, the engine’s turbo-free design enables instant responses to throttle input, which are accompanied by a throaty but modulated exhaust note. Though the engine sounds angrier as the revs rise, it is not obnoxiously loud. Its bark—though stirring—is not commensurate with its tire-spinning bite. The brakes are effective, working well with the wide rubber to scrub off speed.

When the transmission is set in Sport+ mode, snappy upshifts greet heavy throttle. In this, the most aggressive automatic setting, the 7-speed gearbox reacts with the type of timing that befits the world-class Laguna Seca track. But Manual mode is a head-scratcher. Tap the magnesium paddle shifters when the dial is clicked to “M,” and it seems as though half a second passes before the cogs are swapped. Even worse, during the test-drive, downshifts sometimes were ignored—an inexplicable flaw considering Sport+ mode’s crisp, seemingly prescient gear changes.

Back in Sport+ mode, the Black Series can exploit its crisp turn-in and sticky mid-corner grip. The tail kicks out easily when provoked—not surprising considering the massive amounts of torque routed to the rear wheels. But when the tires slide, the yawing motion is remarkably predictable; traction loss escalates in a balanced, progressive way, contrary to the skittish dance one might expect from such a dialed-in sports coupe. In fact, this Black Series’s manners depart dramatically from those of one of its forebears, the CLK63 AMG Black Series of 2007, which was a twitchy track toy.

The C63 Black Series displays the type of feedback, polish, and handling prowess that make it a more approachable beast compared to its predecessor, and a thoroughly entertaining drive—despite its sometimes-disobedient transmission. The Coupe delivers speed, conveys attitude, and, perhaps best of all, grants membership in the exclusive Black Series club.