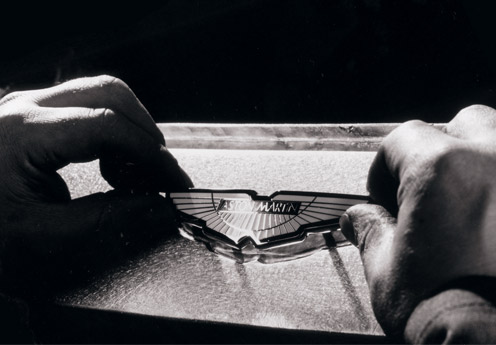 On the roads of Gaydon, England, prototypes of the Aston Martin AM V8 Vantage motor around town, undergoing various tests to eliminate every existing kink. Company insiders call the stealthy two-seat sports car Project 305, an unassuming designation for a machine that promises merely to shake Aston Martin upside down and inside out, ushering the British brand into a high-speed sector of automobile production that it has never before traveled.

The $100,000 AM V8 Vantage and the recently debuted DB9 represent Aston Martin’s transformation from an eclectic and eccentric boutique constructor to a full-production manufacturer under Ford, its parent company. In 2003, Aston Martin will have built approximately 1,500 cars; by 2005, the company intends to boost production to 5,000 units each year.

Aston Martin CEO Ulrich Bez calls the DB9, which was un-veiled in September and replaces the DB7, the most important Aston Martin ever, citing its dedicated platform, stunningly elegant body, and powerful V-12 engine. But the AM V8 Vantage, projected to battle the Porsche 911, takes the company toward a completely new direction involving higher production numbers and lower price points. “The AM V8 Vantage is the perfect car for Aston,” says Steve Serio, president and general manager of Aston Martin of New England, one of the country’s most successful Aston dealerships. “It broadens the marque’s appeal. In many ways, the AM V8 Vantage reminds me of Giorgio Armani years ago, before the movie American Gigolo. No one really knew the Armani name then, but after that it was everywhere. Today there is also Emporio Armani, and in no way has that move hurt the brand.”

No matter how brilliant the Vantage may be, its reduced price and exclusivity compared to rare-air Astons such as the Vanquish or DB7 Zagato have concerned at least one Aston enthusiast. “I am somewhat sorry to see the move downward,” says Peter Read, a prominent Aston collector. “But from a business standpoint, it makes a lot of sense, and there are precedents. Look at how well Mercedes-Benz has done by broadening its range. I know Dr. Bez has thought a lot about it, and the new model will guarantee the company’s profitability well into the future. Aston Martin also keeps coming out with a lot of upper-end products to keep people like me happy.”

Read should not worry about the Vantage becoming the equivalent of a $25,000 C-Class. The rear-wheel-drive sports car will feature a powerful 4.3-liter, 400-hp V-8 engine. An apt comparison would be with the Bentley Continental GT, a less expensive Bentley that retains the understated elegance of the marque and serves as an everyday car.

However, the grand plan of tripling production within two years would not even have been considered if Aston Martin were not in the process of making a major change, one that will move its production process 50 miles away and into the 21st century. Since 1955, the company’s base of operations has been in Newport Pagnell, located about an hour’s drive from London. The sleepy town and the antiquated ambience of the facility contrast with the town’s most significant export: the 190-mph $230,000 Vanquish.

The old factory put Aston at odds with efficiency. Before it could begin building the DB7 in 1993, the company had to purchase another facility 45 minutes away in Bloxham, where Jaguar’s mid-engine XJ220 supercar production had just concluded. Currently, Bloxham is Aston Martin’s second home, where the last of the DB7s—the Zagato Coupe and AR1 Roadster—are being produced. The factory will be sold when the production run of these cars is completed.

Unbeknownst to many automotive insiders, Aston spent the last two years building a new factory in Gaydon while increasing its engineering staff from 20 to 200. The glistening facility serves as a serious statement about Aston Martin and its intentions. Its modern facade and rounded surfaces are far removed from the appearances of almost every factory in the industry, especially those in England, where old-world charm and the inherent inefficiencies that come with such dated facilities are the rule, not the exception. Inside, it is open and airy and will easily handle all three model lines: Project 305, the DB9, and the Vanquish successor that is still several years away. The factory in Newport Pagnell—which goes hand in hand with Aston as do Maranello with Ferrari and Sant’Agata Bolognese with Lamborghini—will eventually become a service facility.

Serio says that the Gaydon factory is the best thing that could have happened to Aston. “In one fell swoop, the company went from being way behind the times in terms of how to build a car to teaching everyone else how to do it,” he says. “Most everyone has a factory first and then figures out what to produce in it. In this case, Aston went out and made the cars, then constructed a purpose-built factory to manufacture them.”

Aston’s plan to increase production from 1,500 cars a year to 5,000 raises other concerns. In the $100,000 range, where the daily-driver 911 is the target, owners will expect everything to function perfectly. “That is why we have had the tenfold increase in the size of the engineering staff,” says Jeremy Main, director of product development. Numerous prototypes, both within Gaydon’s skunk works section and out on the road, undergo rigid durability testing, as Main and his team concentrate on unearthing the refinement and reliability one would expect in a car that will be employed every day.

Despite a reduced price tag, the fit and finish of both the exterior and interior of the Vantage will not be compromised, promises Aston Design Director Henrik Fisker. The company will not dip into Ford’s corporate parts bin for items such as tail lamps and instruments; Aston dashboards will feature jewellike instruments. “The inspiration was fine watches and high-end hi-fi,” says Fisker. “We looked outside the auto industry to redefine what luxury is, to get away from black molded injection panels and wood accents that are used purely for decoration. We view it like making a fine home, where decoration is an integral part of the structure.”

The final piece of Aston’s transformation is the all-new vertical/horizontal (VH) platform, an advanced aluminum-bonded frame that will serve as the basis for all upcoming Astons. The platform offers advantages such as durability, light weight, and rigidity, qualities that will enhance the performance of future Astons and reduce manufacturing costs. Such improvements can only aid in furthering the company mission: to build elegant and understated British sports cars that compete with—if not defeat—the best challenges of Germany and Italy.