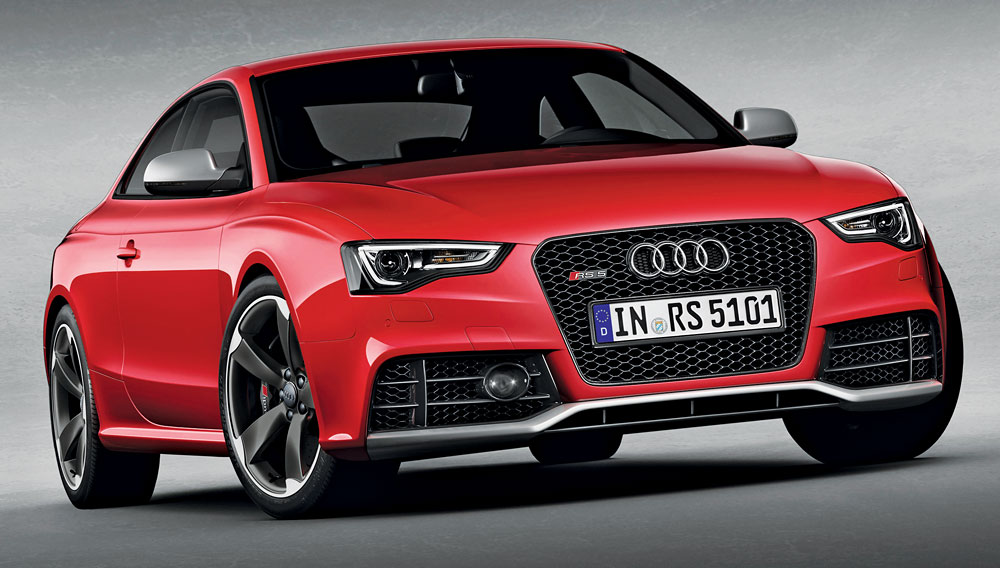 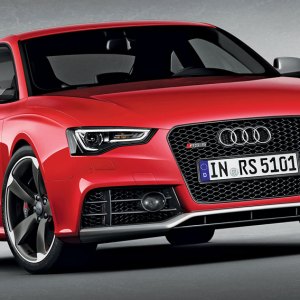 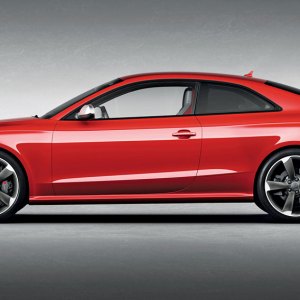 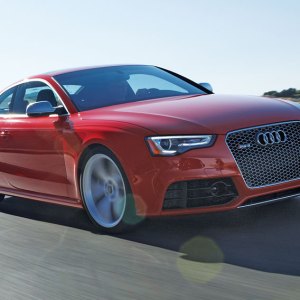 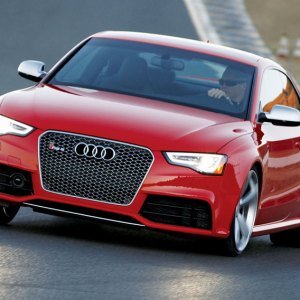 The 2013 Audi RS 5 is a meaner-looking relative of the elegant A5 sport coupe. Its sills are wider, ride height lower, rear diffuser larger, and exhaust tips bigger, and the RS 5 has a rear spoiler that pops up automatically when the car reaches 75 mph. These alterations convey a sense of serious purpose and accurately indicate the RS 5 is packed with high-performance components that make it racetrack-ready.

The most significant of those components is a 4.2-liter V-8, which is mated to a dual-clutch, 7-speed transmission. (Audi does not offer a manual option with this model.) The engine and gearbox pairing is a gem. The naturally aspirated powerplant produces 450 hp at a screaming 8,250 rpm and, according to Audi, propels the nearly 4,000-pound RS 5 from zero to 60 mph in 4.5 seconds and to a governed top speed of 174 mph.

When the RS 5’s engine is spinning at its redline, the pistons move faster than 85 feet per second, which approaches Formula 1 velocities. Likewise, the transmission has been tuned for quicker, crisper shifts and is now the fastest-shifting dual-clutch gearbox in the Audi lineup. Power is routed through all four wheels, and as much as 85 percent of the power can be sent to the rear wheels.

The RS 5 was designed and engineered by Audi’s Quattro division, the in-house, high-performance arm that is the brand’s equivalent of BMW’s M and Mercedes-Benz’s AMG. The RS 5 has been available in Europe since 2010, but only now is the coupe coming to the United States, which will receive 500 examples of the 2013 model. The starting price is just under $69,000. Among the options are $6,000 carbon-ceramic front brakes, a $2,500 Titanium package that includes 20-inch wheels (the standard wheels are 19 inches), a $1,000 sport-exhaust system, and a $3,550 Google Earth–linked MMI Navigation Plus package that offers street-view displays of destinations.

The American version of the RS 5 does not look any different from the European version, but it feels different. The ride on public roads is unrelentingly firm, in part because American crash-structure regulations prevented Audi from incorporating the electronically adjustable damping setup found on the European version. Thus the RS 5’s suspension relays every detail of road surface. This can become tiresome over long stretches of highway, but it also offers the assurance that the car has a firm grasp of the road.

The cockpit design of the RS 5 is only discreetly different from the A5’s. Model-specific piano-black trim distinguishes the interior, and body-hugging sports seats, a thick-rimmed and flat-bottom steering wheel, and a tachometer that does not turn red until the 8,500 rpm hash mark suggest the coupe’s capabilities.

During test-drives at the Sonoma raceway in Northern California, the RS 5 delivered on its mildly menacing looks and promising underpinnings. The RS 5 is intended to be as comfortable and capable on a racetrack as it is on winding back roads, and it is. Though it might not be as nimble and flickable on the track as two of its peers—the BMW M3 Coupe and the Mercedes-Benz C 63 AMG Coupe, each of which weighs 200 to 300 pounds less than the Audi—the RS 5 still offers a stirring ride that will satisfy luxury-loving thrill seekers.

At the Sonoma raceway, the RS 5 bolted eagerly out of the gate, thanks to the all-wheel-drive setup, dual-clutch transmission, and engine, whose 317 ft lbs of torque peak between 4,000 rpm and 6,000 rpm. The launch-control feature optimized the interplay between the engine and transmission, enabling the swift takeoff with minimal tire spin.

With the driving mode set to Dynamic, as opposed to Comfort or Auto, the RS 5 delivered a sharper throttle response, more aggressive shift points, heavier steering, a louder exhaust note, and more performance-oriented behavior from the sport differential. As the revs rose and the exhaust valves opened, the V-8 filled the cabin with a husky but refined hum.

Though the RS 5 has an electric-steering setup, the wheel continued to convey plenty of information when the coupe’s speed increased along the 2.52-mile, 12-turn track, proving that traditional hydraulic arrangements are not necessarily superior at delivering steering feel.

The drive showed that the transmission’s sportiest setting is not necessarily the best setting for a racetrack. When the transmission was set to this most aggressive automatic mode, gearshifts were quick, but they arrived too early to allow the engine to properly wind out. Individual mode, on the other hand, presented a trade-off: Though it gave me ultimate control over shift points, it demanded a vigilant eye (and ear) on the engine rpms to avoid bouncing off the rev limiter.

The RS 5’s brakes, which feature a motorcycle-derived wave design that enables lighter weight and better heat dissipation, reduced the coupe’s speed quickly and firmly. The optional carbon-ceramic front brakes offer even more stopping power, and together they are 18 pounds lighter than the standard brakes. At the end of the day, the RS 5’s brakes—the standard, non-carbon-ceramic ones—showed only slight signs of fading, and overall the test cars seemed none the worse for wear despite lap after lap of hard driving by media members.

In its least intrusive setting, the car’s stability-control system allows some slip angle before reining things in. It also allows the car to slide innocuously when it enters corners at high speeds. In the S-turns on the back side of the Sonoma track, where misjudgments of speed or steering can imperil a driver, the stability control worked relatively unobtrusively to correct the car’s path and keep it on track.

Having your bacon saved in such a manner by the electronics might encourage you to explore the car’s handling limits with greater abandon. That should result in a happy day of spirited lapping.